Tawaf (Arabic: طواف‎‎, Ṭawāf; literally circling) is one of the Islamic rituals of pilgrimage. During the Hajj and Umrah, Muslims are to go around the Kaaba 7 times (most sacred site in Islam) , in a counterclockwise direction.[1] The circling is believed to demonstrate the unity of the believers in the worship of the One God, as they move in harmony together around the Kaaba, while supplicating to God. 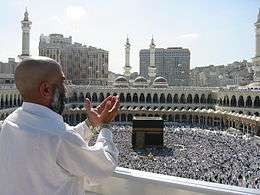 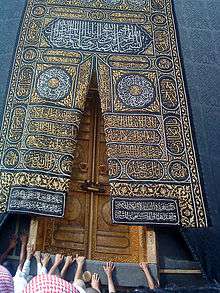 Gate of the Kaaba

The circle begins from the Black Stone (al-Ḥajar al-'Aswad) on the corner of the Kaaba. If possible, Muslims are to kiss or touch it, but this is often not possible because of the large crowds, so it is acceptable for them to simply point or hold up their hand to the Stone on each circuit. They are also to make the Takbir prayer (Bismillah Allahu Akbar) each time they approach.

For men, it is recommended to make the first three circuits at a hurried pace, followed by four times, more closely, at a leisurely pace.

At the end of the circling, Muslims go to the Station of Ibrahim to pray two nafl prayer rak'ahs, and then drink water from the sacred Well of Zamzam, before proceeding to the next ritual of the Hajj, the Sa'yee.

Muslims are generally advised to "make ṭawāf" at least twice – once as part of the Hajj, and again as their final activity before leaving Mecca.[2]

However, on some occasions when it is especially humid or crowded, respiration may become more difficult due to excess carbon dioxide in the air around the Kaaba.[3]

There are several types of ṭawāf that can be performed:

Attempts have been made to establish a connection between the act of ṭawāf and orbiting motions of heavenly bodies. It has been proposed, for example, that the act of ṭawāf closely resembles the shape of a galaxy when viewed from above (Muhammad Eusha, "Scientific Significance of Circling the Kaba", The Daily Sun, 11 February).[4] But this view has not been verified by qualified ulama.

As above, so below is the precept of sacred geometry and Hermeticism. The ancients observed the 7 Classical Planets/Seven Heavens and 4 don't cast shadows on Earth (Venus can), 4 can't be easily seen during the day (Venus can be in a clear sky). The 4 Lunar phases are roughly 7 days (7.4 days) each. The Lunar Year + 7 day week + 4 days = Solar Year. Orion the Hunter is 7 stars with 4 making up his shoulders and feet (with three in Orion's Belt). Etc. Therefore, Tawaf has 7 circumambulations around a meteorite encased in the 4-sided Kaaba with three rounds at a fast pace and 4 rounds at a leisurely pace.