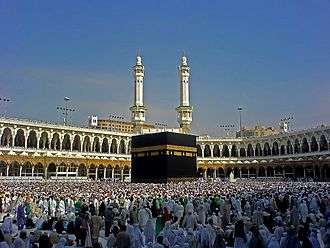 Pilgrims circumambulating the Kaaba, in Mecca (Saudi Arabia) during the Hajj

The ʿUmrah (Arabic: عمرة‎‎) is a pilgrimage to Mecca, Saudi Arabia, performed by Muslims that can be undertaken at any time of the year, in contrast to the Hajj. In Arabic, Umrah means "to visit a populated place." In the Sharia, Umrah means to perform Tawaf round the Kaaba and Sa'i between Al-Safa and Al-Marwah, after assuming Ihram (a sacred state), either from a Miqat like Zu 'l-Hulafa, Juhfa, Qarnu 'l-Manāzil, Yalamlam, Zāt-i-'Irq, Ibrahīm Mursīa, or a place in Hill. It is sometimes called the 'minor pilgrimage' or 'lesser pilgrimage', the Hajj being the 'major' pilgrimage and which is compulsory for every able-bodied Muslim who can afford it. The Umrah is not compulsory but highly recommended.

The pilgrim performs a series of ritual acts symbolic of the lives of Ibrahim (Abraham) and his second wife Hajar, and of solidarity with Muslims worldwide. These acts of faith are:

These rituals complete the Umrah, and the pilgrim can choose to go out of ihram. Although not a part of the ritual, most pilgrims drink water from the Well of Zamzam. Various sects of Islam perform these rituals with slightly different methods.

The peak times of pilgrimage are the days before, during and after the Hajj and during the last ten days of Ramadan.

al-Umrat al mufradah refers to Umrah that is performed independently of Hajj.

Umrat al-tammatu refers to Umrah that is performed in conjunction with Hajj. More precisely, the rituals of the Umrah are performed first and then the Hajj rituals are performed.

Difference between Hajj and Umrah

Throughout Muhammad's era the Muslims wanted to establish the right to perform Umrah and Hajj. During that time Mecca was occupied by Arab Pagans who used to worship idols inside Mecca.[2][3]

The first military campaign related to the Umrah was the Nakhla Raid ordered by Muhammad, Abdullah ibn Jahsh's was the commander of this expedition. During this raid one of Abdullah ibn Jahsh's men , Ukkash ibn Mihsan, was shaven in head to hide the real purpose of their journey and to give the Quraysh the impression of lesser Hajj (Umra); for it was the month (Rajab) when hostilities were forbidden. When the Quraysh saw the shaven head of Ukkash, they thought that the group was on its way for pilgrimage and they felt relieved and began to set up camp. They said, "These people seek the 'Umrah, so there is no need to fear them."[4][5] The sacred months of the Arab Pagans were the 1st, 7th, 11th and 12th months of the Islamic calendar according to the Muslim scholar Safiur Rahman Mubarakpuri.[6]

Muhammad signed the Treaty of Hudaybiyyah, which took place in March 628.[7] During this event Muslims March to Mecca to perform the lesser pilgrimage (Umrah).[8]

Muhammad also ordered the Expedition of Abu Qatadah ibn Rab'i al-Ansari (Batn Edam) in December 629[9] to divert the attention from his intention of attacking Mecca. He despatched 8 men to attack a caravan passing through Edam.[10] During this expedition one Muslim was killed by another Muslim.[11][12] After this, verse 4:94 of the Quran was revealed.[13][14] Ibn Kathir interprets this as, God asking Muslims to be more careful when fighting "in the way of Allah", as to reduce the chance of killing Muslims accidentally, as happened in this incident.[13]

Finally Muhammad ordered and took part in the almost entirely peaceful Conquest of Mecca in December 629.[9][15] After the conquest the people of Makkah who had persecuted and driven away the early Muslims, and had fought against the Muslims due to their beliefs were afraid of retribution. However, Muhammad forgave even the most ardent of enemies of Islam to establish safe sanctuary in their homes. This was a significant moment where Muhammad showed mercy as opposed to revenge to the people of Makkah. Thus, the right to perform Umrah and Hajj were guaranteed.