For other uses, see Telescope (disambiguation). 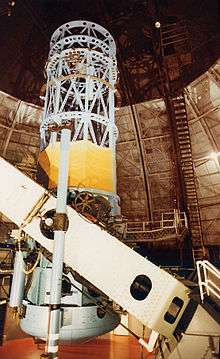 A telescope is an optical instrument that aids in the observation of remote objects by collecting electromagnetic radiation (such as visible light). The first known practical telescopes were invented in the Netherlands at the beginning of the 1600s, by using glass lenses. They found use in both terrestrial applications and astronomy.

Within a few decades, the reflecting telescope was invented, which used mirrors to collect and focus the light. In the 20th century many new types of telescopes were invented, including radio telescopes in the 1930s and infrared telescopes in the 1960s. The word telescope now refers to a wide range of instruments capable of detecting different regions of the electromagnetic spectrum, and in some cases other types of detectors.

The word telescope (from the Ancient Greek τῆλε, tele "far" and σκοπεῖν, skopein "to look or see"; τηλεσκόπος, teleskopos "far-seeing") was coined in 1611 by the Greek mathematician Giovanni Demisiani for one of Galileo Galilei's instruments presented at a banquet at the Accademia dei Lincei.[1][2][3] In the Starry Messenger, Galileo had used the term perspicillum.

Main article: History of the telescope

Modern telescopes typically use CCDs instead of film for recording images. This is the sensor array in the Kepler spacecraft. 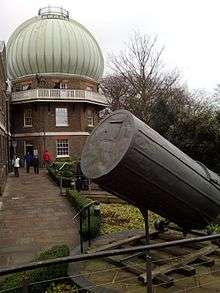 The earliest recorded working telescopes were the refracting telescopes that appeared in the Netherlands in 1608. Their development is credited to three individuals: Hans Lippershey and Zacharias Janssen, who were spectacle makers in Middelburg, and Jacob Metius of Alkmaar.[4] Galileo heard about the Dutch telescope in June 1609, built his own within a month,[5] and improved upon the design in the following year. In the same year, Galileo became the first person to point a telescope skyward in order to make telescopic observations of a celestial object.[6]

The idea that the objective, or light-gathering element, could be a mirror instead of a lens was being investigated soon after the invention of the refracting telescope.[7] The potential advantages of using parabolic mirrors—reduction of spherical aberration and no chromatic aberration—led to many proposed designs and several attempts to build reflecting telescopes.[8] In 1668, Isaac Newton built the first practical reflecting telescope, of a design which now bears his name, the Newtonian reflector.

The invention of the achromatic lens in 1733 partially corrected color aberrations present in the simple lens and enabled the construction of shorter, more functional refracting telescopes. Reflecting telescopes, though not limited by the color problems seen in refractors, were hampered by the use of fast tarnishing speculum metal mirrors employed during the 18th and early 19th century—a problem alleviated by the introduction of silver coated glass mirrors in 1857,[9] and aluminized mirrors in 1932.[10] The maximum physical size limit for refracting telescopes is about 1 meter (40 inches), dictating that the vast majority of large optical researching telescopes built since the turn of the 20th century have been reflectors. The largest reflecting telescopes currently have objectives larger than 10 m (33 feet), and work is underway on several 30-40m designs.

The 20th century also saw the development of telescopes that worked in a wide range of wavelengths from radio to gamma-rays. The first purpose built radio telescope went into operation in 1937. Since then, a tremendous variety of complex astronomical instruments have been developed.

Telescopes may be classified by the wavelengths of light they detect:

As wavelengths become longer, it becomes easier to use antenna technology to interact with electromagnetic radiation (although it is possible to make very tiny antenna). The near-infrared can be collected much like visible light, however in the far-infrared and submillimetre range, telescopes can operate more like a radio telescope. For example, the James Clerk Maxwell Telescope observes from wavelengths from 3 μm (0.003 mm) to 2000 μm (2 mm), but uses a parabolic aluminum antenna.[11] On the other hand, the Spitzer Space Telescope, observing from about 3 μm (0.003 mm) to 180 μm (0.18 mm) uses a mirror (reflecting optics). Also using reflecting optics, the Hubble Space Telescope with Wide Field Camera 3 can observe in the frequency range from about 0.2 μm (0.0002 mm) to 1.7 μm (0.0017 mm) (from ultra-violet to infrared light).[12]

At the photon energy of shorter wavelengths (higher frequency), glancing-incident optics, rather than fully reflecting optics are used. Telescopes such as TRACE and SOHO use special mirrors to reflect Extreme ultraviolet, producing higher resolution and brighter images than are otherwise possible. A larger aperture does not just mean that more light is collected, it also enables a finer angular resolution. 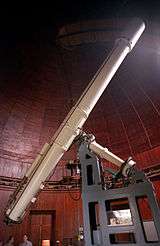 An optical telescope gathers and focuses light mainly from the visible part of the electromagnetic spectrum (although some work in the infrared and ultraviolet).[13] Optical telescopes increase the apparent angular size of distant objects as well as their apparent brightness. In order for the image to be observed, photographed, studied, and sent to a computer, telescopes work by employing one or more curved optical elements, usually made from glass lenses and/or mirrors, to gather light and other electromagnetic radiation to bring that light or radiation to a focal point. Optical telescopes are used for astronomy and in many non-astronomical instruments, including: theodolites (including transits), spotting scopes, monoculars, binoculars, camera lenses, and spyglasses. There are three main optical types:

Beyond these basic optical types there are many sub-types of varying optical design classified by the task they perform such as astrographs, comet seekers, solar telescope, etc. 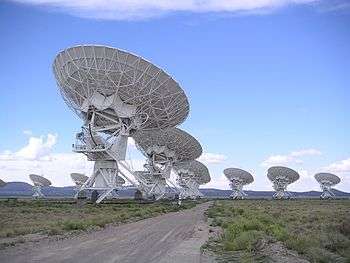 Radio telescopes are directional radio antennas used for radio astronomy. The dishes are sometimes constructed of a conductive wire mesh whose openings are smaller than the wavelength being observed. Multi-element Radio telescopes are constructed from pairs or larger groups of these dishes to synthesize large 'virtual' apertures that are similar in size to the separation between the telescopes; this process is known as aperture synthesis. As of 2005, the current record array size is many times the width of the Earth—utilizing space-based Very Long Baseline Interferometry (VLBI) telescopes such as the Japanese HALCA (Highly Advanced Laboratory for Communications and Astronomy) VSOP (VLBI Space Observatory Program) satellite. Aperture synthesis is now also being applied to optical telescopes using optical interferometers (arrays of optical telescopes) and aperture masking interferometry at single reflecting telescopes. Radio telescopes are also used to collect microwave radiation, which is used to collect radiation when any visible light is obstructed or faint, such as from quasars. Some radio telescopes are used by programs such as SETI and the Arecibo Observatory to search for extraterrestrial life.

X-ray telescopes can use X-ray optics, such as a Wolter telescopes composed of ring-shaped 'glancing' mirrors made of heavy metals that are able to reflect the rays just a few degrees. The mirrors are usually a section of a rotated parabola and a hyperbola, or ellipse. In 1952, Hans Wolter outlined 3 ways a telescope could be built using only this kind of mirror.[15][16] Examples of an observatory using this type of telescope are the Einstein Observatory, ROSAT, and the Chandra X-Ray Observatory. By 2010, Wolter focusing X-ray telescopes are possible up to 79 keV.[14]

Higher energy X-ray and Gamma-ray telescopes refrain from focusing completely and use coded aperture masks: the patterns of the shadow the mask creates can be reconstructed to form an image.

X-ray and Gamma-ray telescopes are usually on Earth-orbiting satellites or high-flying balloons since the Earth's atmosphere is opaque to this part of the electromagnetic spectrum. However, high energy X-rays and gamma-rays do not form an image in the same way as telescopes at visible wavelengths. An example of this type of telescope is the Fermi Gamma-ray Space Telescope.

A discovery in 2012 may allow focusing gamma-ray telescopes.[17] At photon energies greater than 700 keV, the index of refraction starts to increase again.[17]

High-energy astronomy requires specialized telescopes to make observations since most of these particles go through most metals and glasses.

In other types of high energy particle telescopes there is no image-forming optical system. Cosmic-ray telescopes usually consist of an array of different detector types spread out over a large area. A Neutrino telescope consists of a large mass of water or ice, surrounded by an array of sensitive light detectors known as photomultiplier tubes. Originating direction of the neutrinos is determined by reconstructing the path of secondary particles scattered by neutrino impacts, from their interaction with multiple detectors. Energetic neutral atom observatories like Interstellar Boundary Explorer detect particles traveling at certain energies.

Other types of telescopes 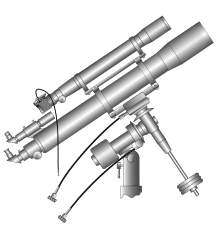 Astronomy is not limited to using electromagnetic radiation. Additional information can be obtained using other media. The detectors used to observe the Universe are analogous to telescopes, these are:

A telescope mount is a mechanical structure which supports a telescope. Telescope mounts are designed to support the mass of the telescope and allow for accurate pointing of the instrument. Many sorts of mounts have been developed over the years, with the majority of effort being put into systems that can track the motion of the stars as the Earth rotates. The two main types of tracking mount are:

Since the atmosphere is opaque for most of the electromagnetic spectrum, only a few bands can be observed from the Earth's surface. These bands are visible – near-infrared and a portion of the radio-wave part of the spectrum. For this reason there are no X-ray or far-infrared ground-based telescopes as these have to be observed from orbit. Even if a wavelength is observable from the ground, it might still be advantageous to place a telescope on a satellite due to astronomical seeing.

A diagram of the electromagnetic spectrum with the Earth's atmospheric transmittance (or opacity) and the types of telescopes used to image parts of the spectrum.

Different types of telescope, operating in different wavelength bands, provide different information about the same object. Together they provide a more comprehensive understanding. 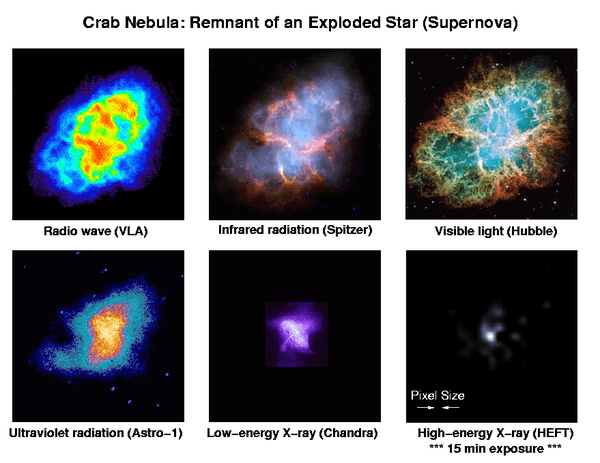 A 6′ wide view of the Crab nebula supernova remnant, viewed at different wavelengths of light by various telescopes

Telescopes that operate in the electromagnetic spectrum: