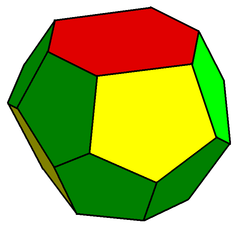 A tetradecahedron with D2d symmetry, existing in the Weaire–Phelan structure

A tetradecahedron is a polyhedron with 14 faces. There are numerous topologically distinct forms of a tetradecahedron, with many constructible entirely with regular polygon faces.

A tetradecahedron is sometimes called a tetrakaidecahedron.[1][2] No difference in meaning is ascribed.[3][4] The Greek word kai means 'and'. There is evidence that mammalian epidermis cells are shaped like flattened tetrakaidecahedra, an idea first suggested by Lord Kelvin. [5]

There are 1,496,225,352 topologically distinct convex tetradecahedra, excluding mirror images, having at least 9 vertices.[6] (Two polyhedra are "topologically distinct" if they have intrinsically different arrangements of faces and vertices, such that it is impossible to distort one into the other simply by changing the lengths of edges or the angles between edges or faces.)

Tetradecahedra having all regular polygonal faces (all exist in irregular-faced forms as well):

Tetradecahedra having at least one irregular face: