A regular tetrahedron, an example of a solid with full tetrahedral symmetry

A regular tetrahedron has 12 rotational (or orientation-preserving) symmetries, and a symmetry order of 24 including transformations that combine a reflection and a rotation.

The group of all symmetries is isomorphic to the group S4, the symmetric group of permutations of four objects, since there is exactly one such symmetry for each permutation of the vertices of the tetrahedron. The set of orientation-preserving symmetries forms a group referred to as the alternating subgroup A4 of S4.

Chiral and full (or achiral tetrahedral symmetry and pyritohedral symmetry) are discrete point symmetries (or equivalently, symmetries on the sphere). They are among the crystallographic point groups of the cubic crystal system.

Seen in stereographic projection the edges of the tetrakis hexahedron form 6 circles (or centrally radial lines) in the plane. Each of these 6 circles represent a mirror line in tetrahedral symmetry. The intersection of these circles meet at order 2 and 3 gyration points.

The conjugacy classes of T are:

A4 is the smallest group demonstrating that the converse of Lagrange's theorem is not true in general: given a finite group G and a divisor d of |G|, there does not necessarily exist a subgroup of G with order d: the group G = A4 has no subgroup of order 6. Although it is a property for the abstract group in general, it is clear from the isometry group of chiral tetrahedral symmetry: because of the chirality the subgroup would have to be C6 or D3, but neither applies. 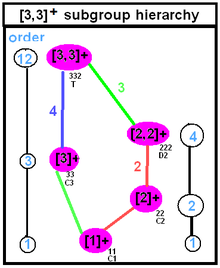 Td, *332, [3,3] or 43m, of order 24 – achiral or full tetrahedral symmetry, also known as the (2,3,3) triangle group. This group has the same rotation axes as T, but with six mirror planes, each through two 3-fold axes. The 2-fold axes are now S4 (4) axes. Td and O are isomorphic as abstract groups: they both correspond to S4, the symmetric group on 4 objects. Td is the union of T and the set obtained by combining each element of O \ T with inversion. See also the isometries of the regular tetrahedron.

The conjugacy classes of Td are: 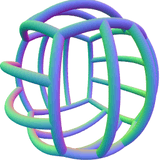 The seams of a volleyball have pyritohedral symmetry

Th, 3*2, [4,3+] or m3, of order 24 – pyritohedral symmetry. This group has the same rotation axes as T, with mirror planes through two of the orthogonal directions. The 3-fold axes are now S6 (3) axes, and there is a central inversion symmetry. Th is isomorphic to T × Z2: every element of Th is either an element of T, or one combined with inversion. Apart from these two normal subgroups, there is also a normal subgroup D2h (that of a cuboid), of type Dih2 × Z2 = Z2 × Z2 × Z2. It is the direct product of the normal subgroup of T (see above) with Ci. The quotient group is the same as above: of type Z3. The three elements of the latter are the identity, "clockwise rotation", and "anti-clockwise rotation", corresponding to permutations of the three orthogonal 2-fold axes, preserving orientation.

It is the symmetry of a cube with on each face a line segment dividing the face into two equal rectangles, such that the line segments of adjacent faces do not meet at the edge. The symmetries correspond to the even permutations of the body diagonals and the same combined with inversion. It is also the symmetry of a pyritohedron, which is extremely similar to the cube described, with each rectangle replaced by a pentagon with one symmetry axis and 4 equal sides and 1 different side (the one corresponding to the line segment dividing the cube's face); i.e., the cube's faces bulge out at the dividing line and become narrower there. It is a subgroup of the full icosahedral symmetry group (as isometry group, not just as abstract group), with 4 of the 10 3-fold axes.

The conjugacy classes of Th include those of T, with the two classes of 4 combined, and each with inversion: 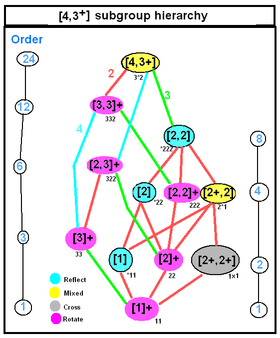 The Icosahedron colored as a snub tetrahedron has chiral symmetry.