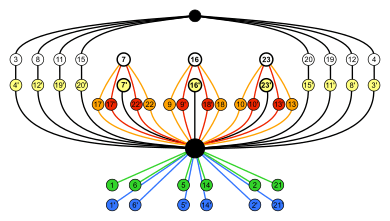 Cycle graphThe four hexagonal cycles have the inversion (the black knot on top) in common. The hexagons are symmetric, so e.g. 3 and 4 are in the same cycle, but not 3 and 12.

A regular octahedron has 24 rotational (or orientation-preserving) symmetries, and a symmetry order of 48 including transformations that combine a reflection and a rotation. A cube has the same set of symmetries, since it is the dual of an octahedron.

The group of orientation-preserving symmetries is S4, the symmetric group or the group of permutations of four objects, since there is exactly one such symmetry for each permutation of the four pairs of opposite sides of the octahedron.

Chiral and full (or achiral) octahedral symmetry are the discrete point symmetries (or equivalently, symmetries on the sphere) with the largest symmetry groups compatible with translational symmetry. They are among the crystallographic point groups of the cubic crystal system.

,and a natural way to identify its elements is as pairs

.But as it is also the direct product

, one can simply identify the elements of

and their inversions as

So e.g. the identity

can be seen in the six files below. Each file is denoted by the

, and the position of each permutation in the file corresponds to the

A rotoreflection is a combination of rotation and reflection:

applied on the 120° rotation

applied on the 90° rotation

O, 432, or [4,3]+ of order 24, is chiral octahedral symmetry or rotational octahedral symmetry . This group is like chiral tetrahedral symmetry T, but the C2 axes are now C4 axes, and additionally there are 6 C2 axes, through the midpoints of the edges of the cube. Td and O are isomorphic as abstract groups: they both correspond to S4, the symmetric group on 4 objects. Td is the union of T and the set obtained by combining each element of O \ T with inversion. O is the rotation group of the cube and the regular octahedron.

With the 4-fold axes as coordinate axes, a fundamental domain of Oh is given by 0 ≤ x ≤ y ≤ z. An object with this symmetry is characterized by the part of the object in the fundamental domain, for example the cube is given by z = 1, and the octahedron by x + y + z = 1 (or the corresponding inequalities, to get the solid instead of the surface). ax + by + cz = 1 gives a polyhedron with 48 faces, e.g. the disdyakis dodecahedron.

The 9 mirror lines of full octahedral symmetry can be divided into two subgroups of 3 and 6 (drawn in purple and red), representing in two orthogonal subsymmetries: D2h, and Td. D2h symmetry can be doubled to D4h by restoring 2 mirrors from one of three orientations.

The isometries of the cube

48 symmetry elements of a cube

(To be integrated in the rest of the text.)

The cube has 48 isometries (symmetry elements), forming the symmetry group Oh, isomorphic to S4 × C2. They can be categorized as follows:

An isometry of the cube can be identified in various ways:

For cubes with colors or markings (like dice have), the symmetry group is a subgroup of Oh.

For some larger subgroups a cube with that group as symmetry group is not possible with just coloring whole faces. One has to draw some pattern on the faces.

Octahedral symmetry of the Bolza surface

In Riemann surface theory, the Bolza surface, sometimes called the Bolza curve, is obtained as the ramified double cover of the Riemann sphere, with ramification locus at the set of vertices of the regular inscribed octahedron. Its automorphism group includes the hyperelliptic involution which flips the two sheets of the cover. The quotient by the order 2 subgroup generated by the hyperelliptic involution yields precisely the group of symmetries of the octahedron. Among the many remarkable properties of the Bolza surface is the fact that it maximizes the systole among all genus 2 hyperbolic surfaces.