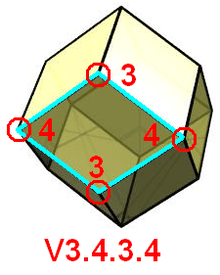 A rhombic dodecahedron with its face configuration

The disdyakis triacontahedron, with face configuration V4.6.10, is the largest Catalan solid, with 120 faces.

Additionally, two of the Catalan solids are edge-transitive: the rhombic dodecahedron and the rhombic triacontahedron. These are the duals of the two quasi-regular Archimedean solids.

The Catalan solids, along with their dual Archimedean solids, can be grouped by their symmetry: tetrahedral, octahedral, and icosahedral. There are 6 forms per symmetry, while the self-symmetric tetrahedral group only has three unique forms and two of those are duplicated with octahedral symmetry.