For the British band, see The Go-Go's (British band). For other uses, see Go go (disambiguation).

The Go-Go's were an American rock band formed in 1978.[1] They made history as the first and only all-female band that both wrote their own songs and played their own instruments to top the Billboard album charts.[2]

The Go-Go's rose to fame during the early 1980s. Their 1981 debut album, Beauty and the Beat, is considered one of the "cornerstone albums of (US) new wave" (AllMusic), breaking barriers and paving the way for a host of other new American acts. When the album was released, it steadily climbed the Billboard 200 chart, ultimately reaching No. 1, where it remained for six consecutive weeks. The album sold in excess of 3 million copies and reached triple platinum status, making it one of the most successful debut albums ever. The Go-Go's have sold more than 7 million albums.[3]

They were formed as a punk band and had roots in the L.A. punk community;[5] they shared a rehearsal space with the Motels, and Carlisle (under the name "Dottie Danger") had briefly been a member of punk rock band the Germs. Due to a bout of mononucleosis, she left the Germs before playing a gig.

The band started out playing gigs at seminal punk venues such as The Masque and the Whisky A Go Go in Los Angeles and the Mabuhay Gardens in San Francisco alongside bands such as Fear, the Plugz and the Controllers. Charlotte Caffey (lead guitar, keyboards) was added later in 1978, and in the summer of 1979, Gina Schock replaced Bello on drums. With these lineup changes, the group began moving towards their more-familiar power pop sound.

The group used to frequently meet at a now-defunct Denny's on Sunset Boulevard in Hollywood, and it was there that they chose the band's name.

During late 1979, the band recorded a five-song demo at Gold Star Studios in Los Angeles, and in 1980, they supported the British ska revival group Madness in both Los Angeles and England. The Go-Go’s subsequently spent half of 1980 touring England, earning a sizable following and releasing the demo version of "We Got the Beat" on Stiff Records, which became a minor UK hit.

During December 1980, original bassist Olavarria fell ill with hepatitis A and was replaced with Kathy Valentine, who had played guitar in bands such as Girlschool and the Textones. Valentine had not previously played bass guitar. Carlisle also related in her autobiography, Lips Unsealed, that, according to the band's view, another reason for Olavarria's dismissal from the Go-Go's was that she frequently missed rehearsals, due largely to her dissatisfaction with the band's move away from punk and toward pop. In late 1982, Olavarria sued the remaining members of the band for wrongfully throwing her out. The suit was settled in 1984. Olavarria later joined Martin Atkins' band Brian Brain.[6] 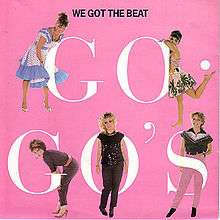 Cover image from the 1982 hit single "We Got the Beat"

The Go-Go's signed to I.R.S. Records in April 1981. Their debut album, Beauty and the Beat, was a surprise hit: it topped the U.S. charts for six weeks in 1982 and eventually received a triple platinum certification. The album was also a success outside the U.S. charting at No. 2 in Canada, where it received a platinum certification, and No. 27 in Australia. In 2003, the album was ranked No. 413 on Rolling Stone magazine's list of the 500 greatest albums of all time. "Our Lips Are Sealed" and a new version of "We Got the Beat" were extremely popular singles in North America in early 1982. During this period, the Go-Go's became America's sweethearts and started building a fanbase.[7] 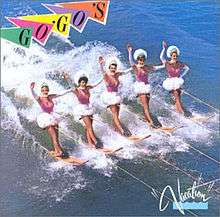 The follow-up album, Vacation, received mixed reviews and sold far less than Beauty and the Beat. However, the album was certified gold in the U.S. and spawned another top 10 US hit with the title track. Other singles released from the album were "Get Up and Go" and "This Old Feeling", neither of which made it into the Top 40. In 1983, Vacation was nominated for a Grammy Award for Best Packaging. During the album's promotion, the group was forced to go on hiatus when Schock underwent surgery for a congenital heart defect.

In 1984, the group returned with the Martin Rushent-produced album Talk Show. The album tracks "Head over Heels" and "Turn to You" were both Top 40 hits in the US. Despite the favorable critiques, the album sold far less than the previous two, not reaching the top 10 and not receiving any certification.

Personality conflicts and creative differences within the group were also taking a toll, as were drug addiction problems for some band members. Wiedlin announced her departure from the group in October 1984. The band sought a replacement, and finally selected Paula Jean Brown (of Giant Sand) as their new bass guitarist, with Valentine moving to rhythm guitar. This lineup debuted at the 1985 Rock in Rio festival, playing two shows, but Carlisle and Caffey soon realized their hearts were no longer in the group and decided to disband the Go-Go's in May 1985.

In 1990, the Go-Go's classic lineup (Caffey, Carlisle, Schock, Valentine and Wiedlin) reunited to play a benefit concert for the California Environmental Protection Act, a 1990 ballot initiative. This led to more show dates later that year. The band also entered the studio with producer David Z to re-record a cover of "Cool Jerk" for a greatest hits compilation.

In 1994, the same lineup got together again to release the 2-disc retrospective Return to the Valley of The Go-Go's, which featured three new recordings. The single "The Whole World Lost Its Head" peaked at No. 21 on the Billboard Modern Rock charts and "bubbled under" on the US charts at No. 108, but became the band's first and only Top 40 hit in the UK, peaking at No. 29. The band toured again to promote the release; ex-Bangle Vicki Peterson stood in on several dates for Caffey, who was pregnant.

In 1997, Schock sued the other members of the group, claiming that she had not been properly paid for her contributions since 1986 and that a songwriting agreement with Caffey had been breached. The suit was resolved by 1999 when the band reunited for a brief tour[9] and they finally began to resolve their personal differences.

In 2001, the band (still with the "classic" lineup) released an album of new material, God Bless The Go-Go's. Green Day's lead singer Billie Joe Armstrong co-wrote the only released single, "Unforgiven", which peaked at No. 22 on Billboard's Adult Top 40 chart. The album was well received by critics, and peaked at number No. 57 in the Billboard 200 chart.

Also in 2001, the Go-Go's, along with artists Elton John, Billy Joel, David Crosby and Paul Simon, performed at the concert "An All-Star Tribute to Brian Wilson" at Radio City Music Hall, hosted by the TNT network. 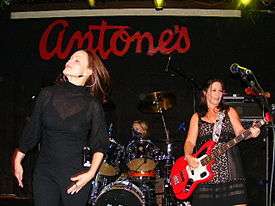 The Go-Go's toured regularly from 1999 onward. In February 2010, Carlisle announced that the 2010 tour would be billed as the "Farewell Tour",[10] but this tour was cancelled when Wiedlin injured her knee while hiking near her home in Northern California, requiring surgery and up to a year of recovery time.[11]

After 2010, the idea of a farewell tour seemed to have been abandoned, with the Go-Go's touring frequently. In 2011, the Go-Go's announced the "Ladies Gone Wild" tour to commemorate the 30th anniversary of the release of Beauty and the Beat.[12]

On August 11, 2011, the band received the 2,444th star on the Hollywood Walk Of Fame located at the site where punk rock club The Masque used to stand. They subsequently toured the US in 2012, with Abby Travis subbing for an injured Valentine during the latter part of the tour.

Departure of Kathy Valentine and lawsuit

On March 8, 2013, the group's official website said "irreconcilable differences" had led to the departure of bassist Valentine.[13] On May 24, Valentine sued her former bandmates for "breach of fiduciary duty and abuse of control...in an attempt to deprive [her] of her position and interest in the group, including her right to receive her full one-fifth, 20% share of the benefits and revenues generated by the group substantial reputation, fame, and goodwill."[14][15] Valentine's last full show with the band had occurred on May 9, 2012.

Now officially a quartet (Caffey, Carlisle, Schock, Wiedlin) the Go-Go's continued on, playing a series of tour dates in 2013 and 2014, including several double bills with the B-52's.[16] Abby Travis performed with the group as an adjunct member on bass.

In 2014, the band was inducted in the Hollywood Bowl Hall of Fame.[17] That same year, the lawsuit that Valentine brought against her former band mates was settled out of court.

In a February 2016 blog post by Wiedlin on her personal website, she announced that a new Go-Go's tour would kick off in August 2016, stating that it would be the "Farewell Tour" that had originally been postponed in 2010 while she recovered from her knee injury. On March 21, 2016, plans for the farewell tour (minus Valentine) were officially announced. The tour consisted of 18 dates kicking off on August 2 and ending on August 30. Kaya Stewart and Best Coast were the opening acts. A band statement said: "After a 38-year run, we are gearing up for one last blast of a summer tour".[18]

On July 27, 2016 the band appeared on the television talk show Jimmy Kimmel Live! to promote the tour. Songs played on the show included "We Got the Beat" and "Vacation".