Radio City Music Hall is an entertainment venue located in Rockefeller Center in New York City. Its nickname is the Showplace of the Nation, and it was for a time the leading tourist destination in the city. Its interior was declared a city landmark in 1978.

The 12-acre (4.9 ha) complex in Midtown Manhattan known as Rockefeller Center was developed between 1929 and 1940 by John D. Rockefeller, Jr., on land leased from Columbia University. The Radio City Music Hall was designed by architect Edward Durell Stone and interior designer Donald Deskey in the Art Deco style.

Its originally planned name was International Music Hall.[3] The names "Radio City" and "Radio City Music Hall" derive from one of the complex's first tenants, the Radio Corporation of America. Radio City Music Hall was a project of Rockefeller; Samuel Roxy Rothafel, who previously opened the Roxy Theatre in 1927; and RCA chairman David Sarnoff. RCA had developed numerous studios for NBC at 30 Rockefeller Plaza, just to the south of the Music Hall, and the radio-TV complex that lent the Music Hall its name is still known as the NBC Radio City Studios.

The Music Hall opened to the public on December 27, 1932 with a lavish stage show featuring Ray Bolger, Doc Rockwell and Martha Graham. The opening was meant to be a return to high-class variety entertainment. The new format was not a success. The program was very long, and individual acts were lost in the cavernous hall. On January 11, 1933, the Music Hall converted to the then-familiar format of a feature film, with a spectacular stage show perfected by Rothafel at the Roxy Theatre in New York City. The first film shown on the giant screen was Frank Capra's The Bitter Tea of General Yen, starring Barbara Stanwyck, and the Music Hall became the premiere showcase for films from the RKO-Radio Studio. The film-plus-stage-spectacle format continued at the Music Hall until 1979, with four complete performances presented every day.

By the 1970s, changes in film distribution made it difficult for Radio City to secure exclusive bookings of many films; furthermore, the theater preferred to show only G-rated movies, which further limited their film choices as the decade wore on.[4] Regular film showings at Radio City ended in 1979. Plans were made to convert the theater into office space, but a combination of preservation and commercial interests (including an irate commentary on Saturday Night Live's Weekend Update given by John Belushi) resulted in the preservation of Radio City and in 1980, after a renovation, it reopened to the public.

Radio City Music Hall is currently leased to and managed by The Madison Square Garden Company[5] Movie premieres and feature runs have occasionally taken place there such as the Harry Potter film series, but the focus of the theater throughout the year is now on concerts and live stage shows. The Radio City Christmas Spectacular continues to be an important annual event (see below). The Music Hall has presented most of the leading pop and rock performers of the last 30 years, as well as televised events including the Grammy Awards, the Tony Awards, the Daytime Emmy Awards the MTV Video Music Awards, and the NFL Draft. Starting in 2013, however, the Tony Awards will be the only major televised awards ceremony at Radio City, as the Video Music Awards relocated permanently to the Barclays Center that year. (The Grammys which alternated between New York City and Hollywood, has been held since 2004 in Los Angeles, as have the Daytime Emmys, off and on, since 2006.)

Radio City has 5,933 seats for spectators, and additional seating can be placed on the pit elevator during events that do not require that space bringing the seating capacity to over 6,000; it became the largest movie theater in the world at the time of its opening.

Designed by Edward Durell Stone, the interior of the theater with its austere Art Deco lines represented a break with the traditional ornate rococo ornament associated with movie palaces at the time. The radiating arches of the proscenium united the large auditorium, allowing a sense of intimacy as well as grandeur. The interior decor was created by designer Donald Deskey. Deskey's geometric Art Deco designs incorporate glass, aluminum, chrome, and leather in the ornament for the theater's wall coverings, carpet, light fixtures, and furniture. His work borrowed heavily from the European Modern aesthetic style, of which he was the foremost exponent in the United States.

The Great Stage, designed by Peter Clark, measures 66.5 by 144 ft (20.3 by 43.9 m), and resembles a setting sun.[6] Its system of elevators was so advanced that the U.S. Navy incorporated identical hydraulics in constructing World War II aircraft carriers; according to Radio City lore, during the war, government agents guarded the basement to assure the Navy's technological advantage.[7] This elevator system was also designed by Peter Clark, and was built by Otis Elevators. 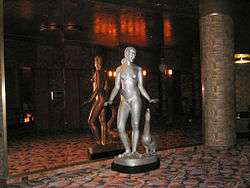 The public areas of the Music Hall feature the work of many depression era artists. The large mural in the grand foyer is entitled "Fountain of Youth" and was painted by Ezra Winter. The murals on the wall of the grand lounge are collectively known as the "Phantasmagoria of the Theater" by Louis Bouche.[8] Three female nudes cast in aluminum were commissioned for the music hall, however Roxy Rothafel thought that they were inappropriate for a family venue.[9] Although the Rockefellers loved the sculptures, the only one that was displayed on opening night was "Goose Girl" by Robert Laurent, which is currently on the first mezzanine. Since opening night the other two sculptures have been put on display at the music hall, "Eve" by Gwen Lux is currently displayed in the southwest corner of the grand foyer, and "Spirit of the Dance" by William Zorach is currently on display in the Grand lounge.[8] Each of the Public restrooms have adjoining lounges that display various works of art.[10] Stuart Davis, Witold Gordon, Edward "Buk" Ulrich, Henry Billings and Donald Deskey all have art displayed in these lounges. Georgia O'Keeffe was asked to paint a mural for the second mezzanine lady's lounge, however she never completed the mural. The reason for her withdrawal is subject to debate.[11]

The Music Hall's "Mighty Wurlitzer" pipe organ is the largest theater pipe organ built for a movie theater. Identical consoles with four manuals (keyboards) are installed on both sides of the Great Stage. Each console operates independently, with the one on the audience's left being the primary one of the two. The organ's 4,410 pipes are installed in chambers on either side of the proscenium's arch. Installed in 1932, the instrument was the largest produced by the Rudolph Wurlitzer Manufacturing Company of North Tonawanda, New York; it was built as a serious concert instrument rather than to accompany silent movies, capable of playing many styles of music including classical organ literature. A total rebuild of the historic organ was completed in time for the theater's restoration in 1999.[12] A smaller Wurlitzer organ was installed in the theater's radio studios, but was put into storage when the studio was converted into office space.

The Radio City Christmas Spectacular is an annual Christmas stage musical produced by MSG Entertainment, which operates the Music Hall. A New York Christmas tradition since 1933, it features the women's precision dance team known as The Rockettes. Additional companies of Rockettes also tour every holiday season, bringing the show to theaters around the country. In addition, the program features appearances of Santa Claus.

The Radio City Music Hall also hosted the Cirque du Soleil show "Zarkana". It stopped playing on September 2, 2012 in order to prepare for the 2012 Christmas Spectacular.

In March 1994, the Lyons Group (parent company of Barney & Friends at the time), taped a live stage show, called "Barney Live in New York City" at the theatre. It was released on home video in August of the same year, and was aired on various PBS stations throughout the country during 1994's Summer and Holiday pledge drives. It was the largest Barney & Friends stage show of its time.

The theater was also the site for Jeopardy!'s 4,000th episode as well as for its Million Dollar Masters invitational tournament in May 2002. It was used again in November 2006 for a 2-week Celebrity Jeopardy! event.

In 2013-2015, the NBC summer reality television talent show America's Got Talent broadcast the final rounds of its competition live from the stage of the Music Hall.

The WNBA's New York Liberty played six home games while their regular home, Madison Square Garden, prepared to host the 2004 Republican National Convention. The Liberty played their first game in front of 5,945 fans against the Detroit Shock in July 2004. Courtside seats were stage left and stage right along the baseline and the Rockettes performed at half-time.[13] These games marked the first time Radio City had hosted a professional sporting event since the Roy Jones Jr. boxing match held in 1999. Radio City Music Hall was the site of the NFL Draft between 2006 and 2014.