The Lion Has Wings

The film was made at the outbreak of the Second World War, released to cinemas very quickly, and helped convince the government of the value of film in both the propaganda battle and the dissemination of information.

The Lion Has Wings is recounted in various "chapters" with a linking story revolving around a senior Royal Air Force (RAF) officer, played by Ralph Richardson, his wife and his family. 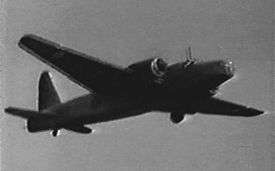 A RAF Vickers Wellington bomber sets off on an attack on the Kiel shipyards in Germany, a pivotal event in the film

The film opens with a newsreel style documentary comparing life in Britain to life in Nazi Germany, narrated by E.V.H. Emmett in the upbeat and patriotic narrative style common to such newsreels in Britain. This mainly uses existing newsreel footage with some additional footage shot especially for this film. It includes scenes from Fire Over England with Queen Elizabeth I giving her speech to the troops at Tilbury about repelling invaders. It also compares the relaxed lifestyles and openness of the British Royal Family and the British people with the militarism of Nazi Germany by including footage from Triumph of the Will (Triumph des Willens).

The second chapter shows an early bombing raid on German warships in the Kiel Canal. Although it was mainly recreated in the studio and with special effects, it also includes some footage of the real bombers and their crews returning from the raid.[2]

The third chapter shows an attack by Luftwaffe bombers and how it is repelled by the RAF, with assistance from the Observer Corps and the barrage balloons.

The epilogue has Mr. and Mrs. Richardson taking a break from their duties, enjoying an afternoon by the river. She gives a stirring speech about how the women of Britain have in the past given their sons and lovers to the land and to the sea and must now give them to the air. But they will do so willingly to defend all that is fair and kind about the British way of life. But Wing Commander Richardson is so tired he falls asleep part way through her speech. 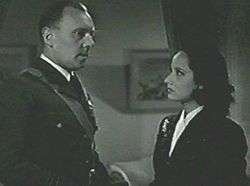 Ralph Richardson and Merle Oberon listening to the declaration of war, a scene which was particularly criticised by critics as being forced and unrealistic.

At the outbreak of war, there were fears that all film production would be halted and cinemas closed, as they were in the First World War. Alexander Korda was close friends with Winston Churchill and was very aware of current events. As soon as war was declared, Korda pulled staff from other productions to fulfill his promise to Churchill that he would have a feature propaganda film ready within one month of the outbreak of war.

Since The Lion Has Wings was made before the attacks on Britain had begun, the film had to rely on existing "stock" footage including sequences lifted from the air raid featurette, The Gap. Contemporary aircraft, many of which were obsolete by 1939, are a noticeable jarring element. The footage of a German bomber taking off is actually a German airliner (Focke-Wulf Fw 200); at least it has the correct markings but most of the aircraft featured in the RAF air show were antiquated biplane fighters. The addition of footage that was shot at operational bases, RAF Hornchurch, Hornchurch, Essex and RAF Mildenhall, Suffolk, England combined with studio work at Denham Studio, Denham, Buckinghamshire, UK, lent an air of authenticity to the production.[3]

To ensure rapid progress, the film had three directors and was shot simultaneously in various locations. Michael Powell was assigned the task of recreating the RAF bomber raids and his taut and well-structured section stands up the best, while Brian Desmond Hurst's sequence with Merle Oberon and Ralph Richardson received the most criticism as being forced and obvious. Adrian Brunel, the last of the three credited directors, was responsible for the spy and "crisis" scenes. Powell later remarked that the project was "all shop-made, edited and directed in less than a month."[4]

The speed of production and the multiple directors shows in the final result, "it's not the most elegant of films",[5] but it is an effective "message" film. It was all shot in 12 days and completed in about four weeks at a cost of just £30,000, a notable achievement in the times. Within days of its release, copies had been shipped to 60 countries. Although it is difficult to determine its actual impact on the public, The Lion Has Wings was considered a significant factor in persuading the British government to allow the film industry to continue to work, and the film was regarded as a model of how filmmakers could be an asset to the war effort.[6]

Like many propaganda films, The Lion Has Wings does not tell the whole truth, but there are many elements of truth in it. The use of radar as a defensive measure was not mentioned since it was still a secret. However, the bombing raids were shown first being reported by spies then confirmed by the Observer Corps, a tactic that was actually occurring as part of the defensive measures. The film also shows Luftwaffe bombers trying to attack London but being completely turned back by barrage balloons which in reality had little effect on the raids. The use of RAF fighters intercepting and attacking enemy bombers at night was not feasible at that point. These errors or misinterpretations added to other lofty claims that Britain had sufficient aircraft in production and was quite ready to fight to counter the overwhelming numbers of Luftwaffe raiders; all purposeful exaggerations intended to bolster morale.

Public reaction was generally reserved, as British audiences saw The Lion Has Wings as patently simplistic and patronising, yet it was a commercial success.[7] Powell later derided the project as "an outrageous piece of propaganda, full of half-truths and half-lies, with some stagey episodes which were rather embarrassing and with actual facts which were highly distorted..."[4]

Author of The Rise and Fall of the Third Reich, William Shirer recounts in his Berlin Diary on 10 June 1940 that he thought the film "very bad, supercilious and silly". He was shown the film at the German Propaganda ministry while working as a CBS Radio news reporter.

This film is available on DVD from:

Theirs Is The Glory: Arnhem, Hurst And Conflict On Film takes film director Brian Desmond Hurst's Battle of Arnhem epic as its centerpiece and chronicles Hurst's ten films on conflict including The Lion Has Wings. Released in hardback on 15 September 2016 with almost 400 pages and over 350 images "this book also shows why Hurst was an enigma, but a master of the genre, and at his very best when focusing on the vast canvas of film" (from dust jacket). ISBN 978-1-911096-63-4. Publisher Helion and Company and co-authored by David Truesdale and Allan Esler Smith.