For the 1848 replica canal boat, see The Volunteer (canal boat).

The Volunteer (1944) is a short black-and-white British film by the filmmakers Michael Powell and Emeric Pressburger for the U.K. Ministry of Information. Made during World War II as recruitment propaganda for the Fleet Air Arm, volunteer numbers rose after its release. 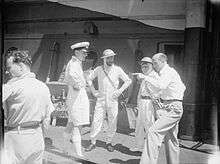 The director Michael Powell during filming for The Volunteer, 1943