The British royal family comprises the monarch of the United Kingdom and her close relations. There is no strict legal or formal definition of who is or is not a member of the British royal family, and apart from Queen Elizabeth II herself, different lists will include different people. Those who, at a time in question, carry the style Her or His Royal Highness (HRH), and any styled Her or His Majesty (HM), are normally considered members, including those so styled before the beginning of the current monarch's reign. By this criterion, a list of the current royal family will usually include the monarch, the consort of the monarch, the widows of previous monarchs, the children and male-line grandchildren of the monarch and previous monarchs, the children of the eldest son of the Prince of Wales, and the wives or widows of the monarch's and previous monarchs' sons and male-line grandsons.

Different terms may be applied to the same or similar group of relatives of the monarch in his or her role as sovereign of any of the other Commonwealth realms. For example, in Canada, the family is known as the Canadian royal family.

Since 1917, when King George V changed the name of the royal house from Saxe-Coburg and Gotha, members of the royal family belong, either by birth or by marriage, to the House of Windsor. Senior titled members of the royal family do not usually use a surname, although since 1960 Mountbatten-Windsor, incorporating Prince Philip's adopted surname of Mountbatten, has been prescribed as a surname for Elizabeth II's direct descendants who do not have royal styles and titles, and it has sometimes been used when required for those who do have such titles.

On 30 November 1917, King George V issued letters patent defining the styles and titles of members of the royal family; the text of the notice from the London Gazette is:[2]

In 1996, Queen Elizabeth II modified these letters patent, and this Notice appeared in the London Gazette:[3]

On 31 December 2012, letters patent were issued to extend a title and a style borne by members of the royal family to additional persons to be born, and this Notice appeared in the London Gazette:[4]

The QUEEN has been pleased by Letters Patent under the Great Seal of the Realm dated 31 December 2012 to declare that all the children of the eldest son of The Prince of Wales should have and enjoy the style, title and attribute of Royal Highness with the titular dignity of Prince or Princess prefixed to their Christian names or with such other titles of honour.

Members and relatives of the British royal family historically represented the monarch in various places throughout the British Empire, sometimes for extended periods as viceroys, or for specific ceremonies or events. Today, they often perform ceremonial and social duties throughout the United Kingdom and abroad on behalf of the United Kingdom. Aside from the monarch, their only constitutional role in the affairs of government is to serve, if eligible and when appointed by letters patent, as a Counsellor of State, two or more of whom exercise the authority of the Crown (within stipulated limits) if the monarch is indisposed or abroad. In the other countries of the Commonwealth royalty do not serve as Counsellors of State, although they may perform ceremonial and social duties on behalf of individual states or the organisation.

The Queen, her consort, her children and grandchildren, as well as all former sovereigns' children and grandchildren hold places in the first sections of the official orders of precedence in England and Wales, Scotland, and Northern Ireland. Wives of the said enjoy their husbands' precedence, and husbands of princesses are unofficially but habitually placed with their wives as well. However, the Queen changed the private order of precedence in the royal family in favour of Princesses Anne and Alexandra, who henceforth take private precedence over the Duchess of Cornwall, who is otherwise the realm's highest ranking woman after the Queen herself.[5][6] She did not alter the relative precedence of other born-princesses, such as the daughters of her younger sons. 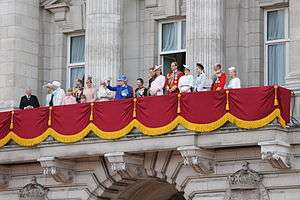 Royal family on the balcony of Buckingham Palace after the annual Trooping the Colour in 2013.

This is a list of current members of the royal family:

There are a few immediate family members (a spouse and the children and grandchildren of its current full or deceased members) carrying no royal style who sometimes appear in listings:[8][9]

In other Commonwealth realms

As the royal family is shared by other Commonwealth realms, its members will often also conduct official and non-official duties outside the United Kingdom, on behalf of the relevant state.