The Maltese Falcon is a 1929 detective novel by Dashiell Hammett, originally serialized in the magazine Black Mask beginning with the September 1929 issue. The story has been adapted several times for the cinema. The main character, Sam Spade, appears in this novel and in three lesser-known short stories and is widely cited as the crystallizing figure in the development of the hard-boiled private detective genre. Raymond Chandler's character Philip Marlowe, for instance, was strongly influenced by Hammett's Spade. Spade was a departure from Hammett's nameless detective, The Continental Op. Spade combined several features of previous detectives, notably his cold detachment, keen eye for detail, unflinching, sometimes ruthless, determination to achieve his own form of justice, and a complete lack of sentimentality.

The novel contains a considerable amount of homosexual subtext concerning Wilmer Cook and Joel Cairo (Cairo is also referred to as the "Levantine"), all of which was excised, because of Production Code restraints, from the 1941 film version starring Humphrey Bogart and Mary Astor, the best known of three films between 1931 and 1941 adapted from Hammett's novel. The briefly seen character Rhea Gutman, who has no back story, does not appear in any of the film versions. In 1998, the Modern Library ranked The Maltese Falcon 56th on its list of the 100 best English-language novels of the 20th century.

Note: the story is told entirely in external third-person narrative; there is no description whatever of any character's internal thoughts or feelings, only what they say and do, and how they look.

In 1928, Samuel "Sam" Spade is a private detective in San Francisco, in partnership with Miles Archer. A beautiful young woman, "Miss Wonderly", hires them to follow Floyd Thursby, and find her sister, who ran off with him. Archer takes the first stint. That night, Archer is found shot to death. A few hours later, Thursby is also killed and Spade is a suspect. Spade refuses to tell the police about the client. The next morning, Spade coolly tells his office secretary, Effie Perine, to have the office door repainted to read simply "Samuel Spade". "Miss Wonderly" is soon revealed as adventuress Brigid O'Shaughnessy, involved with the title object, a foot-high black statuette of unknown but substantial value. Others are after the falcon, including Joel Cairo, an effeminate Greek homosexual, and Casper Gutman, a fat man accompanied by vicious young gunman Wilmer Cook.

O'Shaughnessy begs for Spade's protection, putting on a great show of fear and weakness while telling him as little as possible. Spade responds cynically "You're good. You're very good." They meet with Cairo at Spade's apartment. While they are waiting, Spade tells O'Shaughnessy of the Flitcraft case,[1] an odd story from his early years as a detective. After Cairo leaves, Spade again presses O'Shaughnessy; again she stalls. Instead she kisses Spade. The next morning, she is asleep in his bed. While she is asleep, Spade slips out to search her apartment. 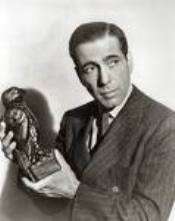 Humphrey Bogart as Sam Spade in the 1941 film adaptation

Effie says O'Shaughnessy "is all right" and Spade should help her. Effie agrees to hide O'Shaughnessy at her home - but O'Shaughnessy disappears again instead. Spade meets Gutman in his hotel room; neither will tell what he knows. Spade implies he is looking out for himself, not O'Shaughnessy. Red herrings abound. The police suspect Spade in the shootings because he was bedding Archer's wife Iva. The District Attorney ties the shootings to Dixie Monahan, a Chicago gambler who employed Thursby as a bodyguard in the Far East.

At a second meeting, Gutman tells Spade the history of the falcon, citing various obscure historical sources. It was made of gold and jewels by the 16th-century Knights of Malta, as a gift to the King of Spain. But it was captured by pirates, and passed from owner to owner around Europe for centuries. At some time it was coated with black enamel to conceal its value. It turned up in Paris in 1911, and then disappeared again. Gutman thinks it could be worth two million dollars. Gutman traced the falcon to General Kemidov, a Russian exile in Constantinople, and hired O'Shaughnessy to get it; she brought in Cairo to help. They got the falcon, but O'Shaughnessy and Thursby fled with it to Hong Kong and then San Francisco. During this conversation, Gutman drugs Spade, who passes out on the floor. Spade awakens alone, and returns to his office. A wounded man staggers in and dies: Captain Jacobi, of the ship La Paloma, just arrived from Hong Kong. Jacobi has a package containing the falcon.

O'Shaughnessy calls the office, begging for Spade's help. Spade stashes the falcon, then goes to an address in Burlingame to help O'Shaughnessy, but it is a "wild goose chase". When he returns, O'Shaughnessy is waiting in front of Spade's apartment building. When they enter the apartment, Gutman, Wilmer, and Cairo are waiting with guns drawn. They want the falcon. Gutman presents $10,000 in cash. But Spade notes that the police must arrest someone for the murders of Thursby and Jacobi. Spade suggests Wilmer as the fall guy; it was he who shot Thursby and Jacobi. Gutman balks, but Wilmer loses control under Spade's taunting, and Spade knocks him out. Gutman agrees to give up Wilmer.

Spade has Effie fetch the falcon. But Gutman discovers it is a fake (a decoy made by General Kemidov). During the excitement, Wilmer escapes. Gutman decides to go to Constantinople for the real falcon; Cairo joins him. Gutman forces Spade to return the $10,000, but lets him keep $1,000 "for expenses". He and Cairo leave.

Spade calls the police and tells them the story, adding that he has Wilmer's guns and other evidence. Then he bullies O'Shaughnessy into confessing her real role. Archer was shot with Thursby's gun (a distinctive English Webley-Fosbery Automatic Revolver, found at the scene) - but not by Thursby. Spade says Archer would never have followed Thursby into a blind alley with his gun buttoned up – but he would have gone there with O'Shaughnessy. She weeps and pleads, but he is implacable. He says she planned the whole thing to get rid of Thursby, by getting him into a fight. Either Archer would kill him, or he would kill Archer and be arrested, and she could vanish. But Thursby backed off, so she killed Archer with Thursby's gun. Then Thursby was killed, so she came back to Spade for protection. She's lied to him and double-crossed him.

O'Shaughnessy admits all this, but pleads that she is in love with Spade and he loves her. Spade refuses to protect her, listing several reasons. Maybe he does care for her; but he says "I won't play the sap for you." If she (a pretty young woman) can get off with a long prison term, he'll wait for her. But if she hangs, so be it. She kisses him one last time, just before the police arrive. He turns her in. The police tell him Wilmer has killed Gutman.

At the office the next day, Effie is shocked that O'Shaughnessy was a ruthless killer, but also that Spade cold-bloodedly turned her in. Then Iva Archer comes in, and the story ends.

Although Hammett himself worked for a time as a private detective for the Pinkerton Detective Agency in San Francisco (and used his given name, Samuel, for the story's protagonist), Hammett called Spade "a dream man" with "no original":

Spade has no original. He is a dream man in the sense that he is what most of the private detectives I worked with would like to have been, and, in their cockier moments, thought they approached.[2]

Hammett reportedly drew upon his years as a detective in creating many of the other characters for The Maltese Falcon, which reworks elements from two of his stories published in Black Mask magazine in 1925, "The Whosis Kid" and "The Gutting of Couffignal".[3] The novel was serialized in five parts in Black Mask in 1929 and 1930 before being published in book form in 1930 by Alfred A. Knopf.

The novel has been filmed four times, twice under its original title:

There have been two audiobooks of the novel:

There has been one stage adaptation: