Based on a story by Dashiell Hammett, this Pre-Code crime film is about a racketeer's daughter who is in love with a shooting gallery showman. Despite her prodding, the showman known as The Kid has no ambitions about joining the rackets and making enough money to support her in the lifestyle she's accustomed to. Her father implicates her in a murder and she's sent to prison, after which her father convinces The Kid to join the gang to free his daughter. 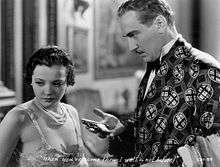 Sylvia Sidney and Paul Lukas in a scene from the film.

Nan Cooley (Sylvia Sidney), the daughter of racketeer Pop Cooley (Guy Kibbee), is in love with The Kid (Gary Cooper), a shooting gallery showman. Cooley tries to urge him to join the gang, in order to earn enough money to support her in the lifestyle she is accustomed to, but The Kid refuses. Soon her father kills bootlegging chief Blackie (Stanley Fields), at the urging of Big Fella Maskal (Paul Lukas), because Blackie was against Maskal's involvement with Blackie's gun moll Aggie (Wynne Gibson).

After Pop shoots Blackie, he passes the gun to Nan, thus implicating her in the murder. She naïvely takes the rap, believing the mob will arrange for her acquittal, but is sent to prison. Pop Cooley tries to convince The Kid to join the gang to free Nan, and he does so out of love for her. However, her attitude had changed since she was railroaded to prison. When The Kid visits Nan in prison in a fur coat, she becomes terrified of his involvement with Pop's gang after witnessing a fellow inmate's mobster boyfriend being gunned down outside the prison gate. When Nan is released, having served her term, she wants nothing more to do with the mob. She tries to persuade The Kid to quit the gang, but he refuses. Things go downhill from there. She finds that her father is unrepentant and involved with a loose, gold-digging woman named Pansy (Betty Sinclair). Maskal soon takes a strong liking to Nan and throws her a homecoming party, forcing her to dance with him all evening. When The Kid finally asserts his claim over Nan, Maskal threatens him, then later sends his thugs to kill him, but The Kid successfully disarms them, then goes after Maskal.

Terrified her lover will be killed, Nan goes to Maskal to warn him and offers herself to him in exchange for The Kid's life. Aggie, now Maskal's mistress, shoots him with Nan's gun after he leaves her for Nan, and Nan is accused of murder. The Kid then names himself mob chief and escapes with Nan in a car with three of Maskal's men, who aim to kill him. Thus events culminate in The Kid and Nan being taken "for a ride" by rival thugs. By racing a train and maintaining high speeds, The Kid keeps himself alive until Nan pulls a gun on the men and disarms them. Dropping the thugs off with "no hard feelings", The Kid tells them he has quit the beer business, and he and Nan drive off.

In 2008, the American Film Institute nominated this film for its Top 10 Gangster Films list.[1]