The Thin Man is a 1934 American Pre-Code comedy-mystery film directed by W. S. Van Dyke and based on the novel of the same name by Dashiell Hammett. The film stars William Powell and Myrna Loy as Nick and Nora Charles; Nick is a hard-drinking, retired private detective, and Nora is a wealthy heiress. Their wire-haired fox terrier Asta is played by canine actor Skippy.

The film's screenplay was written by Albert Hackett and Frances Goodrich, a married couple. In 1934, the film was nominated for the Academy Award for Best Picture. The titular "Thin Man" is not Nick Charles, but the man Charles is initially hired to find – Clyde Wynant (part way through the film, Charles describes Wynant as a "thin man with white hair"). The "Thin Man" moniker was thought by many viewers to refer to Nick Charles and, after a time, it was used in the titles of sequels as if referring to Charles. 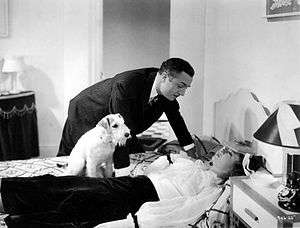 Nick Charles (William Powell), a retired detective, and his wife Nora (Myrna Loy) are attempting to settle down. They are based in San Francisco but decide to spend the Christmas holidays in New York. There Nick is pressed back into service by Dorothy Wynant (Maureen O'Sullivan), a young woman whose father was an old client of Nick's. The man, Clyde Wynant (the title's "thin man"), was supposed to be on a secret business trip and promised to be home before his daughter's wedding, but has mysteriously vanished. She convinces Nick to take the case, much to the amusement of his socialite wife. It starts out as a missing person case, but when Wynant's former secretary and love interest, Julia Wolf, is found dead, evidence points to Wynant as the prime suspect, but Dorothy refuses to believe that her father is guilty. The detective begins to uncover clues and eventually solves the mystery of the disappearance through a series of investigative steps.

The murderer is finally revealed in a classic dinner-party scene that features all of the suspects. A skeletonized body, found during the investigation, had been assumed to be that of a "fat man" because it is wearing oversize clothing. The clothes are revealed to be planted, and the identity of the body is accurately determined by an old war wound to the leg. It turns out that the body belongs to a "thin man": the missing Wynant. The double murder has been disguised in such a way as to make it seem that Wynant is the killer and still alive. The real killer is uncovered at the dinner party, before he almost takes the life of someone who knows too much.

The film was based on the novel of the same name by Dashiell Hammett. Hammett's inspiration drew on his experiences as a union-busting Pinkerton detective in Butte, Montana, in creating his detective characters. Hammett based Nick and Nora's banter upon his rocky on-again, off-again relationship with playwright Lillian Hellman. The novel was released in January 1934.

MGM loved the novel and paid Hammett $21,000 for the screen rights to the novel. The screenplay was written by Albert Hackett and Frances Goodrich, who were a married couple since 1931. Director W.S. Van Dyke encouraged them to use Hammett's writing as a basis only, and to concentrate on providing witty exchanges for Nick and Nora.

Van Dyke was able to convince MGM executives to let Powell and Loy portray the lead characters, despite concerns that Powell was too old and strait-laced to play Nick Charles and that Loy had become typecast in exotic femme fatale roles.[3][4]

Skippy played Asta, the dog of Nick and Nora. Skippy would be cast in two screwball comedy classics, The Awful Truth (1937) and Bringing Up Baby (1938).

The film was shot with a budget of $226,408. For Powell's first scene in the film, Van Dyke told him to take the cocktail shaker, go behind the bar and just walk through the scene while the crew checked lights and sound. Powell did it, throwing in some lines and business of his own. Suddenly he heard Van Dyke say, "That's it! Print it!" The director had decided to shoot the scene without Powell knowing it so that he'd be as relaxed and natural as possible.

Van Dyke often did not bother with cover shots if he felt the scene was right on the first take, reasoning that actors "lose their fire" if they have to do something over and over. It was a lot of pressure on the actors, who often had to learn new lines and business immediately before shooting, without the luxury of retakes, but Loy credited much of the appeal of the film to Van Dyke's pacing and spontaneity. He paid the most attention to Powell and Loy's easy banter between takes and their obvious enjoyment of each other's company and worked it into the movie. The director often encouraged and incorporated improvisation and off-the-cuff details into the picture. In order to keep her entrance fresh and spontaneous, W.S. Van Dyke did not tell her about it until right before they shot it.

Powell loved working so much with Loy because of her naturalness, her professionalism, and her lack of any kind of "diva" temperament. On her, Powell said: "When we did a scene together, we forgot about technique, camera angles, and microphones. We weren't acting. We were just two people in perfect harmony. Myrna, unlike some actresses who think only of themselves, has the happy faculty of being able to listen while the other fellow says his lines. She has the give and take of acting that brings out the best."

According to Loy, the actors were not allowed to interact between takes with the dog, Skippy; trainers felt it would break his concentration. Skippy once bit her during filming.[5]:91

Although she had great compliments for Powell's charm and wit, Maureen O'Sullivan (who played the daughter of Wynant, who was played by Edward Ellis) later said she did not enjoy making the picture because her part was so small and the production was so rushed.

The scene of Nick shooting the ornaments off the tree was added after William Powell playfully picked up an air gun and started shooting ornaments the art department was putting up.

Loy wrote that the biggest problem during shooting was the climactic dinner party scene in which Nick reveals the killer. Powell complained that he had too many lines to learn and could barely decipher the complicated plot he was unraveling. It was the one scene when several retakes were necessary, which brought up an entirely new problem. The script called for oysters to be served to the dinner guests and, in take after take, the same plate of oysters was brought out under the hot lights. "They began to putrefy," Loy recalled. "By the time we finished that scene, nobody ever wanted to see another oyster."[5]:89–90

The film was released in May 25, 1934 to extremely positive reviews and was a box office hit with special praise for the chemistry between Loy and Powell. Mordaunt Hall of The New York Times called it "an excellent combination of comedy and excitement", and the film appeared on the Times year-end list of the ten best of the year.[3] "The Thin Man was an entertaining novel, and now it's an entertaining picture", reported Variety. "For its leads the studio couldn't have done better than to pick Powell and Miss Loy, both of whom shade their semi-comic roles beautifully."[6] "The screen seldom presents a more thoroughly interesting piece of entertainment than this adaptation of Dashiell Hammett's popular novel", raved Film Daily. "The rapid fire dialogue is about the best heard since talkies, and it is delivered by Powell and Miss Loy to perfection."[7] John Mosher of The New Yorker wrote that Loy and Powell played their parts "beautifully", adding, "All the people of the book are there, and I think the final scenes of the solution of the mystery are handled on a higher note than they were in print."[8] Louella Parsons called it "the greatest entertainment, the most fun and the best mystery-drama of the year."[3] The Chicago Tribune said it was "exciting", "amusing" and "fat with ultra, ultra sophisticated situations and dialog." It also called Powell and Loy "delightful".[9] Harrison Carroll of The Los Angeles Herald-Express wrote that it was "one of the cleverest adaptations of a popular novel that Hollywood has ever turned out."[3]

The film was such a success that it spawned five sequels:

In 2002, critic Roger Ebert added the film to his list of Great Movies.[10] Ebert praises William Powell's performance in particular, stating that Powell "is to dialogue as Fred Astaire is to dance. His delivery is so droll and insinuating, so knowing and innocent at the same time, that it hardly matters what he's saying."[11]

In 1997, the film was added to the United States National Film Registry having been deemed "culturally, historically, or aesthetically significant." In 2000 American Film Institute designated the film as one of the great comedies in the previous hundred years of cinema.

Nick Charles: "They never got near my tabloids."
– Nominated[16]

The trailer contained specially filmed footage in which Nick Charles (William Powell) is seen on the cover of the Dashiell Hammett novel The Thin Man. Nick Charles then steps out of the cover to talk to fellow detective Philo Vance (also played by Powell) about his latest case.

Charles goes on to explain to Vance that his latest case revolves around a "tall, thin man" (referring to Clyde Wynant), just before clips of the film are shown.

The Thin Man (TV series) ran from 1957 through 1959, starring Peter Lawford and Phyllis Kirk. In the 1976 comedy spoof movie Murder by Death, the characters of Nick and Nora Charles became Dick and Dora Charleston, played by David Niven and Maggie Smith. The 1979–84 ABC television weekly romantic detective series Hart To Hart also mimicked the central conceit. It starred Robert Wagner, Stefanie Powers and Lionel Stander. In the 11th episode of the second season of the series, "Slow Boat to Murder", there is also a scene where the Harts watch the film on TV. In the 2005 animated film Hoodwinked!, the character Nicky Flippers, a frog detective voiced by David Ogden Stiers, was based on Nick Charles. Echoing the name "Nick Charles", the 2013 Australian crime comedy series Mr & Mrs Murder features married couple "Nicola" and "Charlie" Buchanan, who run an industrial cleaning business specialising in crime scenes and, using this experience, they become amateur sleuths.