For other uses, see The Narrows (disambiguation). 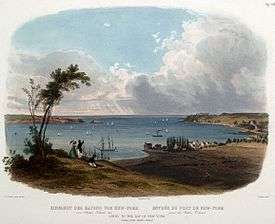 The Narrows is the tidal strait separating the boroughs of Staten Island and Brooklyn in New York City. It connects the Upper New York Bay and Lower New York Bay and forms the principal channel by which the Hudson River empties into the Atlantic Ocean. It has long been considered to be the maritime "gateway" to New York City and historically has been one of the most important entrances into the harbors of the Port of New York and New Jersey.

The Narrows was most likely formed after deposition of the Harbor Hill Moraine about 18,000 years ago prior to the end of the last ice age. Previously Staten Island and Brooklyn were connected and the Hudson River emptied into the ocean through the present course of the Raritan River, by taking a more westerly course through parts of present-day northern New Jersey, along the eastern side of the Watchung Mountains to Bound Brook, New Jersey, and then on into the Atlantic Ocean via Raritan Bay. A build up of water in the Upper Bay allowed the river to break through to form the Narrows less than 12,000 to 13,000 years ago as it exists today. The first recorded European entrance into the Narrows was in 1524 by Giovanni da Verrazzano, who set anchor in the strait and was greeted by a group of Lenape, who paddled out to meet him in the strait.

In August 1776, the British forces under William Howe on Staten Island undertook an amphibious operation across the Narrows and landed in Brooklyn, where they routed Washington's Army at the Battle of Long Island. In 1964 the Narrows was spanned by the Verrazano–Narrows Bridge, the longest suspension bridge in the world at the time, and still the longest suspension bridge in the United States (by length of the main span).