The Public Library of Cincinnati and Hamilton County (PLCH) is a public library system in the United States. In addition to its main library location in downtown Cincinnati, Ohio, PLCH operates 41 regional and branch locations throughout Hamilton County.

Special needs services provided by PLCH include "talking books" and Braille to the visually impaired, blind, and physically handicapped in 33 Ohio counties; its outreach services include books-by-mail, foreign language materials and bilingual programs, and passport application; its literacy services include GED classes and GED practice testing.

PLCH holds one of the largest genealogical collections in the United States. Online postings include Cincinnati and Norwood, Ohio city directories, Sanborn maps, and yearbooks as well as books relating to local history.

In 2015, the Library opened its first MakerSpace at the Main Library downtown. Later that year, branch MakerSpaces also opened at the Reading and St. Bernard locations.

PLCH traces its roots to a subscription library that began in 1802. On March 14, 1853, it became the Cincinnati Public Library.[1] Since its founding, the library has occupied several locations, including its current location at Eighth Street and Vine Street.[9]

Cincinnati's public library was among the first to try providing service to patrons on Sunday. Starting in March 1871, the reading rooms at the main library were open from 8am to 10pm. Sunday library service was so popular that, according to library director William F. Poole, "often during the afternoon and evenings every seat has been occupied". As a result of Cincinnati's experiment, the public libraries in New York, Philadelphia, and St. Louis adopted Sunday hours as well. Poole reported that "many of that class of young men who [had previously] strolled about the streets on Sunday, and spent the day in a less profitable manner, [began] habitually frequenting the rooms and spending a portion of the day in reading."[10]

For many years, the library used the Computerized Information Network for Cincinnati and Hamilton County (CINCH) as a system-wide library catalog which connected each branch through computer terminals.[11] Users at home accessed the database via TELNET. In 2005, the system was replaced with an integrated library system (ILS) purchased from library automation vendor Sirsi, now SirsiDynix.

Beginning in 2001, budget cuts from the State of Ohio drastically reduced funding for PLCH. In July 2002, the Board of Trustees voted to close branch locations in Deer Park, Elmwood Place, Greenhills and Mount Healthy. The board later backed off on the branch closing plan after a strong negative response from citizens in the affected neighborhoods.[12]

In 2005, a state budget plan that cut spending on libraries a further five percent was passed in the Ohio House of Representatives, after being proposed by Ohio governor Bob Taft. The budget prompted the library to distribute flyers and hold rallies in Downtown Cincinnati, calling on the state to repeal the proposed cuts.[13] The cuts resulted in a periodic hiring freeze, reductions in hours, branch and department closings, and the layoff of approximately forty librarians. Librarians responded by voting to join the Service Employees International Union (SEIU) Local 1199 in 2006.[14]

After nine months of contentious negotiations over a union contract, the parties (SEIU and the library administration) resorted to a hearing in front of a third-party neutral negotiator, who drew up a labor contract. Librarians voted 45–1 to approve the contract. The library's Board of Trustees subsequently voted the contract down by a 7–0 vote, citing concerns over 'fair share' proposals built into the contract. After further negotiations between SEIU and attorneys for the library, the Board approved a union contract that did not include fair share. See the Agency shop article for clarification.

In 2007, the library began implementing a reorganization plan, known as ML/21 (Main Library for the 21st Century), that will lead to the creation of a Technology Center, Teen Center, a Popular Library, and a Local History and Genealogy Department. The plan also calls for the disbanding of subject departments in Art and Music, Literature and Languages, History and Genealogy, Rare Books and Special Collections, Science and Technology, Government and Business, Education and Religion, Fiction and Young Adults, and Films and Recordings. The latter two departments will comprise the new Popular Library. The History and Genealogy Department will be merged with Rare Books and Special Collections to create the Local History and Genealogy department. The other subject departments will comprise the Information and Reference department. Approximately 24 professional positions (those holding a Master of Library and Information Science) are slated for elimination through attrition and reassignment.[15][16]

In July 2007, the library joined with Kirtas Technologies, Inc. to digitize rare books and make them available via Amazon.com. The plan costs the library nothing and allows it to retain full control what is digitized. Profits from sales of the digitized books are to be shared with the library. Other institutions involved in the plan include the University of Maine, Emory University in Atlanta, and the Toronto Public Library in Ontario.[17] Digitized material, including books, maps, yearbooks, and city directories, are available via the Public Library of Cincinnati and Hamilton County's Virtual Library.

Fourteen individuals have served as Directors of the Public Library of Cincinnati and Hamilton County:[1]

PLCH has 40 branch locations, in addition to the main library downtown:

The Avondale Branch, a Carnegie library, opened in 1913 on the corner of Reading Road (south of Dana Avenue) and Mann Place. It is designed in Spanish Colonial style 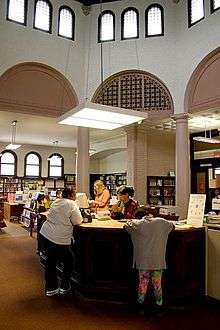 Locations marked with asterisks were built as Carnegie libraries.[18]