Not to be confused with other organizations named Scripps.

The E. W. Scripps Company is an American broadcasting company founded in 1878 as a chain of daily newspapers by Edward Willis Scripps. It was also formerly a media conglomerate. The company is headquartered inside the Scripps Center in Cincinnati, Ohio.[1] Its corporate motto is "Give light and the people will find their own way."[2]

The E. W. Scripps Company was incorporated on December 1, 1987,[3] but it traces its history to November 2, 1878, when Edward Willis Scripps published the first issue of the Cleveland Penny Press.

In 1894, E. W. Scripps and his half-brother, George H. Scripps, organized their various papers into the first modern newspaper chain. In July 1895, it was named the Scripps-McRae League with the addition of Cincinnati Post general manager Milton A. McRae as a partner.[4] On November 29, 1921, it was renamed Scripps-Howard Newspapers, to recognize Roy W. Howard.[5] 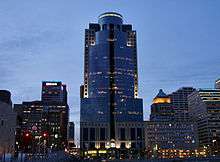 The E. W. Scripps Company is headquartered in the Scripps Center in downtown Cincinnati.

In 1990, the company completed a new downtown Cincinnati headquarters, the Scripps Center.[7]

On October 3, 2011, The E. W. Scripps Company announced it was purchasing the television arm of McGraw-Hill for $212 million.[8] This purchase nearly doubles the number of Scripps stations to 19 with a combined reach of 13% of U.S. households. Upon the 2012 death of E. W. Scripps' grandson, Robert Scripps, the Edward W. Scripps Trust was dissolved and its stock divided among the surviving trustees.[6]

The E. W. Scripps Company and Journal Communications announced on July 30, 2014, that the two companies would merge and spin-off their newspaper assets.[9] The deal created a broadcast group under the E.W. Scripps Company name and retaining the Cincinnati headquarters, and a newspaper company based in Milwaukee, Wisconsin, under the Journal Media Group name.[10] The FCC approved the deal on December 12, 2014, and it was approved by shareholders on March 11, 2015.[11] The merger and spinoff were completed on April 1, 2015.[12][13] Journal Media Group merged with the all-newspaper Gannett Company on April 8, 2016. Gannett had also shed their television and broadcast operations into a spin-off, Tegna, months after the Scripps-Journal merger.

In April 2016, Demand Media announced the sale of the humor/listicle website Cracked.com to E.W. Scripps.[14]In June, it acquired podcast service Stitcher from Deezer[15]

In 1997, Scripps bought daily Texas newspapers in Corpus Christi, Abilene, Wichita Falls, San Angelo and Plano, plus the paper in Anderson, S.C. from Harte-Hanks Communications, along with 25 non-daily newspapers and San Antonio-based KENS-TV and KENS-AM.[16] The purchase price was to be between $605 and $775 million, depending on a federal ruling.[17]

The company, before the merger with Journal and creation of spinoff, owned and operated newspapers in 13 American markets:

Other newspapers owned by Scripps

Scripps operated United Media (composed of the United Feature Syndicate and the Newspaper Enterprise Association). United Feature Syndicate syndicated many notable comic strips including Peanuts, Garfield, Li'l Abner, Dilbert, Nancy and Marmaduke. NEA, originally established as a secondary news service to the Scripps Howard News Service, later evolved into a general syndicate, and were best known for syndicating Alley Oop, Freckles and His Friends, The Born Loser and Frank and Ernest, in addition to an annual Christmas comic strip.[18] The distribution rights to properties syndicated by United Media was outsourced to Universal Uclick in February 2011. While United Media effectively ceased to exist, Scripps still maintains copyrights and intellectual property rights.[19][20]

Scripps also previously owned the Shop at Home Network from 2000 until 2006. Shop at Home in turn owned five television stations, all as a division of its cable network division.

Attempts to use Shop at Home as a complementary service to Food Network and HGTV by selling products connected to personalities of those networks were middling compared to competitors QVC and HSN. On May 22, 2006, Scripps announced that it was to cease operations of the network and intended to sell each of Shop at Home's five owned and operated television stations.[23] Jewelry Television eventually acquired Shop at Home, but Scripps still intended to sell its affiliated stations (Jewelry Television discontinued most Shop at Home operations in March 2008). On September 26, 2006, Scripps announced that it was selling its Shop at Home TV stations to New York City-based Multicultural Television for $170 million.[24]

On October 3, 2011, Scripps announced it was purchasing all seven television stations owned by The McGraw-Hill Companies for $212 million; the sale is a result of McGraw-Hill's decision to exit the broadcasting industry to focus on its other core properties, including its publishing unit.[25] This deal was approved by the FTC on October 31[26] and the FCC on November 29.[27] The deal was completed on December 30, 2011.[28]

On February 10, 2014, Scripps announced it has reached a deal to acquire Buffalo ABC affiliate WKBW-TV and Detroit MyNetworkTV affiliate WMYD for $110 million.[29] The sale was approved by the FCC on May 2, 2014 and was completed on June 16, 2014. This deal has created a duopoly between WMYD and ABC affiliate WXYZ-TV.

Scripps also operates the national (US) spelling bee. The final competition is in Washington, DC, and it is broadcast on ESPN and ABC. Lower levels are organized by the school, then county and eventually to the final competition. E.W. Scripps will retain ownership of the property in the split of its newspaper and broadcasting businesses.