This article is about the film. For the Irving Berlin song of the same name, see There's No Business Like Show Business.

The title is borrowed from the famous song in the stage musical (and MGM film) Annie Get Your Gun. The screenplay was written by Phoebe Ephron and Henry Ephron, based on a story by Lamar Trotti;[3] and the movie was Fox's first musical in CinemaScope and DeLuxe Color.[4]

Donald O'Connor later called the film the best picture he ever made.[5]

In 1919, Terence (Dan Dailey) and Molly Donahue (Ethel Merman), a husband-and-wife vaudeville team known as the Donahues, pursue both a stable family life as well as professional success. The kids Steve (Johnnie Ray), Katy (Mitzi Gaynor), and Tim (Donald O'Connor) join the act one by one, and their act eventually becomes the Five Donahues. The family is a success and soon hit the top.

One night after a show, a worried Molly and Terry return home alone while Katy goes out on a date, Steve takes a walk, and the womanizing Tim goes out with an older chorus girl. Katy and Tim both wind up at a nightclub where Tim teases Victoria Hoffman (Marilyn Monroe). Vicky forgets Tim's wisecracks, however, when Eddie (Frank McHugh), her agent, informs her that he has persuaded famed producer Lew Harris (Richard Eastham) to visit the club. With the help of her co-workers, Vicky gets onstage and impresses Lew and Tim with her singing. Backstage, Vicky learns that Tim is one of the well known Donahues but quickly dismisses him in order to talk business with Harris. 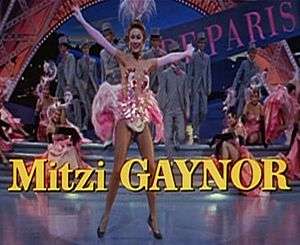 Back at the Donahue home, Steve informs his family that he wants to become a priest. Terry is distraught over his son's decision, but their discussion is interrupted by the appearance of Tim, who got drunk after he was dismissed by Vicky.

After Steve leaves for seminary school, the rechristened Four Donahues accept an engagement in Miami. Upon arrival, Tim is thrilled to find that Hoffman, now known as Vicky Parker, is also appearing there; however she is performing a considerably more sensual version of Heat Wave, the same number as the family. After falling in complete lust with Vicky's performance at rehearsal, Tim gives his approval for her to perform the number without checking with the family beforehand.

Katy begins dating Charlie Gibbs (Hugh O'Brian) the show's tall and spare lyricist, and Tim continues dating Vicky. After a misunderstanding over a broken dinner date with Vicky, Tim goes out drinking with a chorus girl and gets in a car accident. Molly and Terry learn of the accident just hours before opening night of the show for which Vicky and Katy have been rehearsing, and Terry goes down to the hospital to confront Tim about his conduct. Tim rebuffs the advice, whereupon Terry slaps him across the face and storms out. The next day, Terry and Molly go back to the hospital to pick up Tim but discover that he has vanished, leaving behind a note apologizing for his behavior. Molly and Terry are both heartbroken but decide to take action.

Molly convinces Harris that, while she'd have to fake the dancing, a feat with which she's been getting away for years, she can go on in Tim's place, having been at rehearsal every night for months. Steve has been called up into the Army as a chaplain and been sent to Europe where his whereabouts are also unknown. Weeks later, the show is a rounding success, but Terry is still despondent over the loss of Tim. After dropping Molly off at the theatre to perform that night, he disappears on the road in a quest for his son, which understandably devastates a very high-strung Molly, having all three of the men in her life with their whereabounts now unknown. 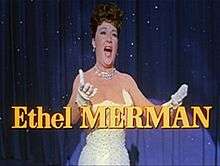 Months later at a benefit show for the closing night of the famed Hippodrome Theatre in New York, Katy, who has since become close friends with Vicky, arranges for her to share a dressing room with her mother to teach her a very well-deserved lesson. Seeing through her daughter's manipulation and highly annoyed thereat, Molly begins to pack up and head upstairs for some peace and quiet, however, Katy not only tells her mother that she'll be doing nothing of the kind, but that she needs to apologize to Vicky for snubbing her at every turn for the past year. Highly incensed at the very idea, she demands to know why and Katy calmly tells her that what happened to Tim, he brought on all by himself. Seeing the truth about her youngest son, Molly relents and has a long talk with Vicky, who assures her that she never did play around on Tim and that she's loved him all along. They make up and Vicky takes her place backstage. Steve comes in unexpectedly, they share a hug, and Molly admits that she was pretty hardheaded too and never gave Vicky the proper chance she deserved.

As Molly performs the title song, Steve and Katy watch from the wings; then Tim, wearing a US Navy uniform, appears behind them. Thrilled to be reunited, the Five Donahues, with Vicky holding tightly onto Tim's hand, all go onstage and happily reprise a short encore of their version of "Alexander's Ragtime Band" before reprising with a finale of the title song.

All songs written by Irving Berlin.[6]

In the months prior to the filming of the movie, Marilyn Monroe had been placed on suspension from 20th Century-Fox after refusing to accept the leading role in a film version of The Girl in Pink Tights. During her suspension, she married baseball star Joe DiMaggio and the two honeymooned in Japan, during which she took time to entertain soldiers in Korea. Fox had intended on casting Sheree North in The Girl in Pink Tights, even testing her in Monroe's own studio wardrobe. When Monroe returned to Hollywood, her Fox suspension was lifted, and studio executives offered her a role in the ensemble cast of There's No Business Like Show Business as a replacement project for having refused to make The Girl in Pink Tights. Monroe initially refused to make There's No Business Like Show Business until Fox ensured her that her next film would be The Seven Year Itch. [8]

Ethel Merman had first sung "There's No Business Like Show Business" in the original Broadway production of Annie Get Your Gun in 1946 and would go on to sing it again in the 1967 television broadcast of the musical's Lincoln Center revival production.[9]

To publicize the film, Monroe wore a black cotton polka-dot swimsuit. It went on auction at Christie's in London in 1991 and sold for $22,400 to collector David Gainsborough Roberts.[10]

Despite boasting a lavish production, There's No Business Like Show Business eventually became both a critical and box office failure.

Ed Sullivan described Monroe's performance of the song "Heat Wave" as "one of the most flagrant violations of good taste" he had witnessed.[11] Time magazine compared her unfavorably to co-star Ethel Merman. Bosley Crowther in The New York Times called the film a "major success" in a generally favorable review, praising in particular Donald O'Connor's performance, but said that Mitzi Gaynor had surpassed Monroe's "wriggling and squirming" which were "embarrassing to behold."[12] Donald O'Connor drew unfavorable reviews for his "over-acting" and "uncanny flirting" with Monroe on-screen. Dan Dailey and Johnnie Ray favored better among critics, although reviewers stated their performances were "below average".

On a budget of $4,340,000,[1] mainly because of delays in production and the lavish musical numbers, the film made just $5,103,555 at the box office,[2] becoming the thirteenth highest-grossing film of 1954. According to records, Fox was expecting a profit of $2 million, but yet ran a loss of almost $950,000. Over time, the film's legacy has improved and has achieved better reviews from critics and fans.