(Tamil:திருச்செந்தூர்) Tiruchendur is a panchayat town at the southern tip of India, in the Thoothukudi district of Tamil Nadu. It is home to Thiruchendur Murugan Temple, one of the ancient Hindu temples dedicated to Lord Muruga.[2][3]

The suburban villages surrounding the town contain arid, red soil forests that are densely planted with palm trees, cashew plantations, and other crops typical of the region.

The town is connected by rail and road. The Tuticorin Airport is about 40 kilometres (25 mi) from Tuticorin, 55 km (34 mi) from Tirunelveli, and 171 km (106 mi) from Madurai.[5] Currently, Spice Jet operates one inbound and outbound flight to Chennai. There are bus connections to Aruppukkottai, Ettayapuram, Tuticorin, Kovilpatti, Sankarankovil, Madurai and Tirunelveli. The town is connected to Tirunelveli by a broad-gauge train track, with a train station at Thiruchendur. The Chendur Express train runs daily between Chennai Egmore Junction and Tiruchendur. Passenger train services are also available between Tirunelveli and Tiruchendur.

An epic poem composed in the 17th century, known as Kapadapuram, relates that Muruga killed the demon, Surapadman, after a six-day battle.[6] The name, 'Tiruchendur', originated from 'Thiru', meaning sacred, because it was a battleground for Lord Muruga, and 'Senthur', meaning 'red place', because of the bloodiness of the battle. Many towns in Tamil Nadu have the same honorary prefix, including Tiruchirappalli, Tiruppur and Tirunelveli. 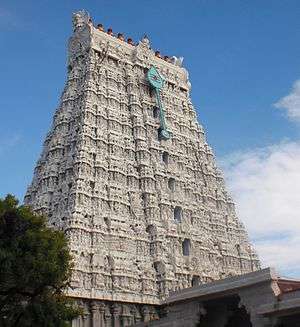 View of the Thiruchedur Temple gopuram 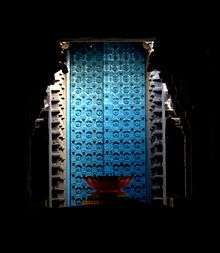 Door of the temple 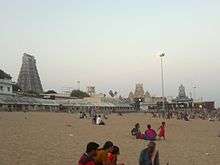 Tiruchendur Murugan Temple is an ancient Hindu temple dedicated to Lord Muruga at the site of the battle. It is one of the six major abodes, or sacred temples, of the Kaumaram religion. Soorasamharam, a reenactment of the victory over Sarapadman, and Kanda Shasti, a devotional song in praise of Lord Muruga are performed at the temple.

The temple, which is built near the seashore, measures 91 m (299 ft) north to south, 65 m (213 ft) east to west, and has a seven-tier gopuram, or tower gate, that is 42 m (138 ft) high.[7] The principal entrance faces south, and opens into the first of two prakarams, the first of which is lined with rows of Yalis. The inner sanctum of the temple is in a cave and the main deity, or moolavar, is Murugan as a saintly child, portrayed in a granite carving.[6]

Naazhi Kinaru, a sacred well fed by a freshwater spring, is located 100 m (330 ft) south of the temple. Devotees undergo a ritual cleansing by bathing in water from the well after bathing in the ocean.[6]

Dutch Occupation of the Thiruchendur Temple

Several lakh of people congregate for Masi Thiruvizha, a 12-day festival at Thiruchendur. The Kayamozhi Athitha Nadarhal Arakattalai Mandahapadi committee organises functions on the sixth and seventh days of the festival. On the tenth day of the festival, the presiding Lord of the Thiruchendur temple makes a special appearance in Thirunelveli Dakshinamara Nadar Sangam, in Sannidhi Street.

Several thousand devotees worship at the Masi Magam festival of the Sri Subramaniawamy temple at Tiruchendur. The festival was inaugurated by the Athitha Nadar clan several centuries ago and includes ritual performances, like Pali-vidalai eridhal.