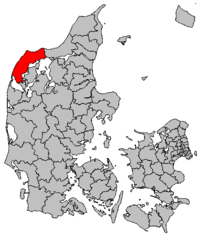 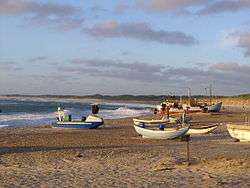 View of beach with small trawlers berthing in Vorupør, Denmark.

Thisted municipality is a municipality (Danish: kommune) in North Denmark Region, Denmark. The municipality covers an area of 1,072 km², and has a total population of 45,549 (2008). Its mayor is Erik Hove Olesen, a member of the Social Democrats (Socialdemokraterne). The main town and the site of its municipal council is the town of Thisted.

Thisted municipality is roughly identical with the traditional district of Thy, except that the municipality includes a small portion of the district Hanherred, but not the southernmost peninsula of Thy, Thyholm.

Famous residents of the municipality