Læsø ("Isle of Hlér") is the largest island in the North Sea bay of Kattegat, and is located 19 kilometres (12 mi) off the northeast coast of the Jutland Peninsula, the Danish mainland. Læsø is also the name of the municipality (Danish, kommune) on that island. The island is a location mentioned in several instances in Norse mythology, including as the dwelling of the sea jötunn Ægir and as a feasting place of the Norse gods, the Æsir.

The Municipality of Læsø

The main town and the site of its municipal council is Byrum.

Because Læsø is an island and lies in the Kattegat, its neighboring municipality, Frederikshavn on the Jutland peninsula, is separated by water, the Læsø Rende, from the island municipality.

Ferry service connects Frederikshavn on the Jutland peninsula to the municipality at the town of Vesterø Havn while Østerby Havn is the island's fishing harbour.

Læsø municipality was not merged with other municipalities in the nationwide 2007 Kommunalreformen ("The Municipal Reform" of 2007).

Læsø has an outstanding botanical interest. The nature-types on and around Læsø includes open water, extensive mudflats, sand banks, heathland, islets and areas of arable land. It houses Denmarks largest tidal saltmarsh outside the Wadden Sea but the decline in grazing animals, has led to a gradual vegetational succession. Invasive species are colonizing the site, especially Japanese Rose and scrub clearance has been implemented to re-establish the former pastures open heathland. Seals like the Harbor seal, are breeding around Læsø and the whole area is an internationally important area for wintering, molting and staging waterbirds. Therefore, a Ramsar protection was put into force in 1977 (number 149) and today it encompass 66,548 ha.[3] 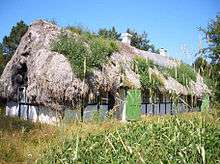 Together with Anholt, Læsø belongs to the Danish "desert belt"; during the summer months there is so little rain that streams and ponds partly dry up.

In the Middle Ages, the island was known for its salt industry. The ground water can reach over 15 percent salt, and this was naturally concentrated in flat salt meadows during the hot dry summers. The final concentration, carried out in hundreds of salt kilns, consumed large amounts of wood. Eventually the island became deforested, sandstorms buried villages, and salt extraction was banned. Since the end of the 1980s it has been resumed on a small scale as an archaeological experiment and a tourist attraction.

Læsø is home to the bee subspecies European dark bee. The species is protected by Danish law which prohibits the import of other species to the island. The law has not been enforced and today normal bees and brown bees are both used for the production of honey. The island has been split in two parts for bee management, one for each species.

Læsø is home to unique styles of Danish traditional music. Most of it is not played any more but has been preserved through intense documentation and research in the 1980s and 1990s.

The HVDC powerline Kontiskan crosses Læsø as overhead line. On Læsø, there is also a 160 metres tall radio relay mast.

Modern Danish Læsø is first attested in Old Norse as Hlésey, meaning "Isle of Hlér". According to the Prose Edda book Skáldskaparmál, Hlér is another name for the sea jötunn Ægir who, according to the same book, there held feasts for the gods.[4]

In the Poetic Edda poem Hárbarðsljóð, the god Thor comments that it was on Hlésey that he was attacked by and so fought "berserk women" or "brides of berserks" who had bewitched all of the men on the island. Thor details that, upon beaching his ship, the women battered it, threatened him with iron clubs and chased his servant, Þjálfi:

These "women" are either personified waves or jötnar. The island is also a setting in the poems Helgakviða Hundingsbana II and Oddrúnargrátr, the saga Örvar-Odds saga, in two skaldic kennings, and the aforementioned (see etymology section above) Prose Edda book Skáldskaparmál.[7]

Since 1992 the island has been home to the noted chef Mogens Bay Esbensen.[8] The artist Per Kirkeby owns a house and studio on the island.