The main church of Thisted

Thisted is a town in Thisted municipality of Region Nordjylland, in Denmark. It has a population of 13,079 (1 January 2014)[1] and is located in Thy, in northwestern Jutland.

The town name derives from the Germanic deity Tyr and could be translated into Tyr's Stead.

Market town status was given to Thisted in the year 1500.

J.P. Jacobsen, Jesper Grønkjær, Bent Larsen, Yutte Stensgaard, Christen Mikkelsen Kold, and the pop duo Junior Senior and disc jockey Kato are some notable people from Thisted. Grethe Rask, a medical doctor who worked in Africa in the 1970s is also from Thisted. Working in primitive conditions, Rask was the first known confirmed case of AIDS to be discovered by the western medical community

Thisted is also home of the Brewery Thisted Bryghus known for its high quality organic beer.

Langdos, the largest bronze age burial mound in Denmark, is located in Thisted. The burial mound is 175 meters long and was built between 1800 and 1000 BC.

Thisted features a church Gothic-style church, the exterior of which contains a stone with Runic inscriptions.

During the Jutland Peasant rebellion of 1441, Christopher of Bavaria, King of Denmark, approached the rebel camp at Husby Hole near St. Jørgen's Hill in northern Jutland and sent word that anyone who left the camp and went home, would not be punished for rebellion. The men from Thisted, as well as those of Mors, left for which they were afterwards called cowards and traitors. 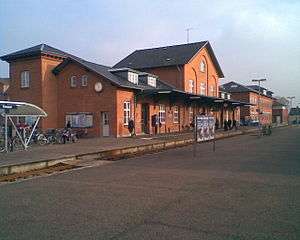 Thisted is served by Thisted railway station. It is located on the Thy railway line and offers direct InterCity services to Copenhagen and local train services to Struer.