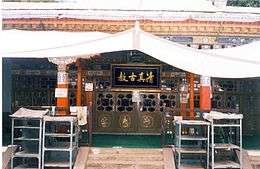 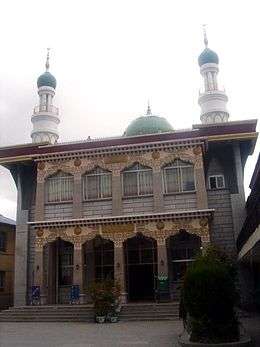 The Tibetan Muslims, also known as the Kachee (Tibetan: ཁ་ཆེ་, Wylie: kha-che ; also spelled Kache), form a small minority in Tibet. Despite being Muslim, they are officially recognized as Tibetans by the government of the People's Republic of China, unlike the Hui Muslims, who are separately recognized. The Tibetan word Kachee literally means Kashmiri and Kashmir was known as Kachee Yul (Yul means Country).

Generally speaking, the Tibetan Muslims are unique in the fact that they are largely of Kashmiri descent through the patrilineal lineage and also often descendants of native Tibetans through the matrilineal lineage, although the reverse is not uncommon. Thus, many of them display a mixture of Indo-Iranian and indigenous Tibetan facial features.

The appearance of the first Muslims in Tibet has been lost in the mists of time, although variants of the names of Tibet can be found in Arabic history books.

During the reign of the Ummayad Caliph Umar bin Abdul Aziz, a delegation from Tibet and China requested him to send Islamic missionaries to their countries, and Salah bin Abdullah Hanafi was sent to Tibet. Between the eighth and ninth centuries, the Abbasid rulers of Baghdad maintained relations with Tibet. However, there was little proselytisation among the missionaries at first, although many of them decided to settle in Tibet and marry Tibetan women.

In 710-720, during the reign of Me Agtsom, the Arabs, who now had more of a presence in China, started to appear in Tibet and were allied with them along with the Eastern Turks against the Chinese.

During the reign of Sadnalegs (799-815), there was a protracted war with Arab powers to the West. It appears that Tibetans captured a number of Arab troops and pressed them into service on the Eastern frontier in 801. Tibetans were active as far west as Samarkand and Kabul. Arab forces began to gain the upper hand, and the Tibetan governor of Kabul submitted to the Arabs and became a Muslim about 812 or 815 [1]

Islam was spread by the Salar people to the formerly Buddhist Kargan Tibetans in Lamo-shan-ken.[2][3] Some Tibetans in Qinghai who converted to Islam are now considered Hui people.[4][5]

The Balti people of Baltistan in Pakistan and Kargil are descendants of Tibetan Buddhists who mostly converted to Shia Islam, with a Sunni minority. Their Balti language is highly archaic and conservative and closer to Classical Tibetan than other Tibetan languages.