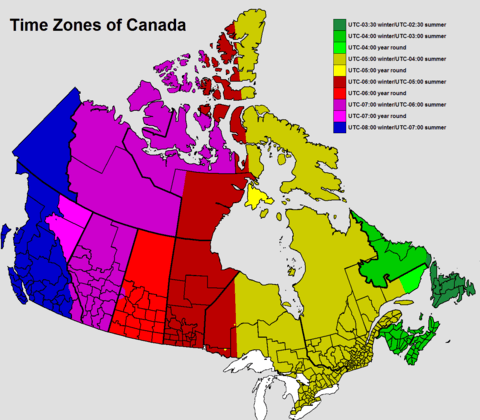 Map of time zones in Canada

Canada is divided into six time zones, based on proposals by Scottish Canadian railway engineer Sir Sandford Fleming, who helped pioneer the world's time zone system.[1] Most of Canada operates on standard time from the first Sunday in November to the second Sunday in March and daylight saving time the rest of the year.[2]

Four Canadian cities, by local ordinance, used Daylight Saving Time in 1916. Brandon, Manitoba on April 17 became the first place in the world to use it. It was followed by Winnipeg on April 23, Halifax on April 30, and Hamilton, Ontario on June 4.[5]

Daylight saving time is now observed in most regions of all provinces and territories, except Saskatchewan (although, since Saskatchewan is in the Mountain Time Zone and observes CST time it is effectively on DST year round). Under the Constitution of Canada, laws related to timekeeping are a purely provincial matter. In practice, since the late 1960s DST across Canada has been closely or completely synchronized with its observance in the United States to promote consistent economic and social interaction. When the United States extended DST in 1987 to the first Sunday in April, all DST-observing Canadian provinces followed suit to mimic the change.

The latest United States change (Energy Policy Act of 2005), adding parts of March and November starting in 2007, was adopted by the various provinces and territories on the following dates: