Time management is the act or process of planning and exercising conscious control over the amount of time spent on specific activities, especially to increase effectiveness, efficiency or productivity.

It is a meta-activity with the goal to maximize the overall benefit of a set of other activities within the boundary condition of a limited amount of time, as time itself cannot be managed in the sense that time is the indefinite continued progress of existence and events that occur in apparently irreversible succession from the past through the present to the future.[1][2][3]

Time management may be aided by a range of skills, tools, and techniques used to manage time when accomplishing specific tasks, projects, and goals complying with a due date. Initially, time management referred to just business or work activities, but eventually the term broadened to include personal activities as well. A time management system is a designed combination of processes, tools, techniques, and methods. Time management is usually a necessity in any project development as it determines the project completion time and scope.

The major themes arising from the literature on time management include the following:

Time management has been considered to be a subset of different concepts such as:

Some time-management literature stresses tasks related to the creation of an environment conducive to "real" effectiveness. These strategies include principles such as:

Writers on creating an environment for effectiveness refer to such matters as having a tidy office or home for unleashing creativity, and the need to protect "prime time". Literature also focuses on overcoming chronic psychological issues such as procrastination.

Excessive and chronic inability to manage time effectively may result from Attention Deficit Hyperactivity Disorder (ADHD) or Attention Deficit Disorder (ADD). Diagnostic criteria include a sense of underachievement, difficulty getting organized, trouble getting started, many projects going simultaneously and trouble with follow-through.[2] Some authors focus on the prefrontal cortex which is the most recently evolved part of the brain. It controls the functions of attention-span, impulse-control, organization, learning from experience and self-monitoring, among others. Some authors argue that changing the way the prefrontal cortex works is possible and offer a solution.[3]

Time management strategies are often associated with the recommendation to set personal goals. The literature stresses themes such as -

These goals are recorded and may be broken down into a project, an action plan, or a simple task list. For individual tasks or for goals, an importance rating may be established, deadlines may be set, and priorities assigned. This process results in a plan with a task list or a schedule or calendar of activities. Authors may recommend a daily, weekly, monthly or other planning periods associated with different scope of planning or review. This is done in various ways, as follows.

A technique that has been used in business management for a long time is the categorization of large data into groups. These groups are often marked A, B, and C—hence the name. Activities are ranked by these general criteria:

Each group is then rank-ordered by priority. To further refine the prioritization, some individuals choose to then force-rank all "B" items as either "A" or "C". ABC analysis can incorporate more than three groups.[4]

This is the idea 80% of tasks can be completed in 20% of the disposable time. The remaining 20% of tasks will take up 80% of the time. This principle is used to sort tasks into two parts. According to this form of Pareto analysis it is recommended that tasks that fall into the first category be assigned a higher priority.

The 80-20-rule can also be applied to increase productivity: it is assumed that 80% of the productivity can be achieved by doing 20% of the tasks. Similarly, 80% of results can be attributed to 20% of activity.[5] If productivity is the aim of time management, then these tasks should be prioritized higher.[6] 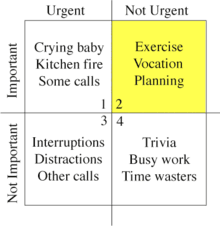 A basic "Eisenhower box" to help evaluate urgency and importance. Items may be placed at more precise points within each quadrant.

This method is said to have been used by U.S. President Dwight D. Eisenhower.[12]

This is the idea that there are actions that you invest in once and which produce over time in different channels. Writing a book is such an action, because it requires a one-time effort, and once you finish it, it continues serving you.[13]

POSEC is an acronym for Prioritize by Organizing, Streamlining, Economizing and Contributing. The method dictates a template which emphasizes an average individual's immediate sense of emotional and monetary security. It suggests that by attending to one's personal responsibilities first, an individual is better positioned to shoulder collective responsibilities.

Inherent in the acronym is a hierarchy of self-realization, which mirrors Abraham Maslow's hierarchy of needs: 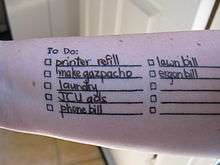 A to-do form tattooed into a person's arm, with some items already written out with a black pen.

A task list (also to-do list or things-to-do) is a list of tasks to be completed, such as chores or steps toward completing a project. It is an inventory tool which serves as an alternative or supplement to memory.

Task lists are used in self-management, grocery lists, business management, project management, and software development. It may involve more than one list.

When one of the items on a task list is accomplished, the task is checked or crossed off. The traditional method is to write these on a piece of paper with a pen or pencil, usually on a note pad or clip-board. Task lists can also have the form of paper or software checklists.

Writer Julie Morgenstern suggests "do's and don'ts" of time management that include:

Numerous digital equivalents are now available, including Personal information management (PIM) applications and most PDAs. There are also several web-based task list applications, many of which are free.

Task lists are often tiered. The simplest tiered system includes a general to-do list (or task-holding file) to record all the tasks the person needs to accomplish, and a daily to-do list which is created each day by transferring tasks from the general to-do list.[14]

Various writers have stressed potential difficulties with to-do lists such as the following:

Many software products for time management support multiple users. They allow the person to give tasks to other users and use the software for communication.

Task list applications may be thought of as lightweight personal information manager or project management software.

Modern task list applications may have built-in task hierarchy (tasks are composed of subtasks which again may contain subtasks),[22] may support multiple methods of filtering and ordering the list of tasks, and may allow one to associate arbitrarily long notes for each task.

In contrast to the concept of allowing the person to use multiple filtering methods, at least one software product additionally contains a mode where the software will attempt to dynamically determine the best tasks for any given moment.[23]

GTD Getting Things Done was created by David Allen and the basic idea behind this method is to finish all the small tasks immediately and a big task is to be divided into smaller tasks to start completing now. The reasoning behind this is to avoid the information overload or "brain freeze" which is likely to occur when there are hundreds of tasks. The thrust of GTD is to encourage the user to get their tasks and ideas out and on paper and organized as quickly as possible so they're easy to manage and see.

Francesco Cirillo's "Pomodoro Technique" was originally conceived in the late 1980s and gradually refined until it was later defined in 1992. The technique is the namesake of a pomodoro (Italian for tomato) shaped kitchen timer initially used by Cirillo during his time at university. The "Pomodoro" is described as the fundamental metric of time within the technique and is traditionally defined as being 30 minutes long, consisting of 25 minutes of work and 5 minutes of break time. Cirillo also recommends a longer break of 15 to 30 minutes after every four Pomodoros. Through experimentation involving various work groups and mentoring activities, Cirillo determined the "ideal Pomodoro" to be 20–35 minutes long.[24]

Time management also covers how to eliminate tasks that do not provide value to the individual or organization.

According to Sandberg,[25] task lists "aren't the key to productivity [that] they're cracked up to be". He reports an estimated "30% of listers spend more time managing their lists than [they do] completing what's on them".

Hendrickson asserts[26] that rigid adherence to task lists can create a "tyranny of the to-do list" that forces one to "waste time on unimportant activities".