A 1497 illustration by Johannes de Cuba, depicting the extraction and use of a toadstone 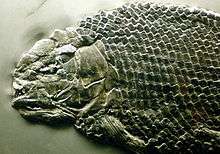 Fossilized Lepidotes, showing detail of the skull, from which toadstones originated

The toadstone, also known as bufonite, is a mythical stone or gem that was thought to be found in the head of a toad. It was supposed to be an antidote to poison and in this it is not unlike batrachite, supposedly formed in the heads of frogs. Toadstones were actually the button-like fossilized teeth of Lepidotes, an extinct genus of ray-finned fish from the Jurassic and Cretaceous periods. They appeared to be "stones that are perfect in form" and were set by European jewellers into magical rings and amulets from Medieval times until the 18th century.[1]

From ancient times people associated the fossils with jewels that were set inside the heads of toads. The toad has poison glands in its skin, so it was naturally assumed that they carried their own antidote and that this took the form of a magical stone. They were first recorded by Pliny the Elder in the first century.[1]

According to Paul Taylor of the English Natural History Museum:

Like tonguestones, toadstones were considered to be antidotes for poison and were also used in the treatment of epilepsy".[1] As early as the 14th century, people began to adorn jewelry with toadstones for their magical abilities. In their folklore, a toadstone was required to be removed from an old toad while the creature was still alive, and as instructed by the 17th century naturalist Edward Topsell, could be done by setting the toad on a piece of red cloth.[1]

The true toadstone was taken by contemporary jewellers to be no bigger than the nail of a hand and they varied in colour from a whitish brown through green to black, depending on where they were buried.[2] They were supposedly most effective against poison when worn against the skin, on which occasion they were thought to heat up, sweat and change colour.[3] If a person was bitten by a venomous creature a toadstone would be touched against the affected part to effect a cure.[4] Loose toadstones were discovered amongst other gemstones in the Elizabethan Cheapside Hoard and there are surviving toadstone rings in the Ashmolean and the British museum.

Sweet are the uses of adversity; Which, like the toad, ugly and venomous, Wears yet a precious jewel in his head.

In James Branch Cabell's short story "Balthazar's Daughter" (collected in The Certain Hour) and its subsequent play adaptation The Jewel Merchants, Alessandro de Medici attempts to seduce Graciosa by listing various precious jewels in his possession, including "jewels cut from the brain of a toad".

Some various other names of the toadstone are:

"Toadstone" is also an old miner's name for the basaltic intrusions into Derbyshire limestone.[5]