The Tokyo National Museum (東京国立博物館, Tōkyō Kokuritsu Hakubutsukan), or TNM, established in 1872, is the oldest Japanese national museum,[2] the largest art museum in Japan and one of the largest art museums in the world. The museum collects, houses, and preserves a comprehensive collection of art works and archaeological objects of Asia, focusing on Japan. The museum holds over 110,000 objects, which includes 87 Japanese National Treasure holdings and 610 Important Cultural Property holdings (as of July 2005). The museum also conducts research and organizes educational events related to its collection.

The museum is located inside Ueno Park in Taito, Tokyo. The facilities consist of the Honkan (本館?, Japanese Gallery) , Tōyōkan (東洋館?, Asian Gallery) , Hyōkeikan (表慶館?) , Heiseikan (平成館?) , Hōryū-ji Hōmotsukan (法隆寺宝物館?, the Gallery of Hōryū-ji Treasures) , as well as Shiryōkan (資料館?, the Research and Information Center) , and other facilities. There are restaurants and shops within the museum's premises, as well as outdoor exhibitions and a garden where visitors can enjoy seasonal views.

The museum's collections focus on ancient Japanese art and Asian art along the Silk Road. There is also a large collection of Greco-Buddhist art.

All information is provided in Japanese, Chinese, English, French, German, Korean, and Spanish.

The museum came into being in 1872, when the first exhibition was held by the Museum Department of the Ministry of Education at the Taiseiden Hall. This marked the inauguration of the first museum in Japan. Soon after the opening, the museum moved to Uchiyamashita-cho (present Uchisaiwai-cho), then in 1882 moved again to the Ueno Park, where it stands today. Since its establishment, the museum has experienced major challenges such as the Great Kantō earthquake in 1923, and a temporary closing in 1945, during World War II. In more than the 120 years of its history, the museum has gone under much evolution and transformation through organizational reforms and administrative change.

The museum went through several name changes, being called the Imperial Museum in 1886 and the Tokyo Imperial Household Museum in 1900, until it was given its present title in 1947.

The growth and development of today's museum has been an evolving process:

The original Main Gallery (designed by the British architect Josiah Conder) was severely damaged in the Great Kantō earthquake of 1923. In contrast to the original building's more Western style, the design of the present Honkan by Jin Watanabe is the more eastern "emperor's crown style". Construction began in 1932, and the building was inaugurated in 1938. It was designated an Important Cultural Property of Japan in 2001.

The Japanese Gallery provides a general view of Japanese art, containing 24 exhibition rooms on two floors. It consists of exhibitions from 10,000 BC up to the late 19th century, exhibitions of different types of art such as ceramics, sculpture, swords, and others.

This building was inaugurated in 1968 and designed by Yoshiro Taniguchi. This is a three-storied building which bring a feeling such as five-storied. Because there are large floors arranged in a spiral ascending from the 1st floor along the mezzanines to the 3rd floor, and many stairs. It has been made huge colonnade air space to reach from the first floor to the third floor ceiling inside, and placement of an exhibition room is complicated. There is a restaurant and museum shop on the first floor, too.

The Asian Gallery consists of ten exhibition rooms arranged on seven region levels. It is dedicated to the art and archaeology of Asia, including China, Korea, Southeast Asia, India, the Middle east and Egypt.

Built to commemorate the marriage of the then Meiji Crown Prince (later Emperor Taisho), Hyokeikan was inaugurated in 1909.[6] This building is designated as an Important Cultural Property as a representative example of Western-style architecture of the late Meiji period (early 20th century). It is open for events and temporary exhibitions only.

Heiseikan serves primarily as space for special exhibitions, but also houses the Japanese Archaeology Gallery. The Japanese Archaeology Gallery on the first floor traces Japanese history from ancient to pre-modern times through archaeological objects. The galleries on the second floor are entirely dedicated to special exhibitions. The Heiseikan building was opened in 1999 to commemorate the crown prince's marriage. The building also contains an auditorium and lounge area.

This gallery displays some examples of pottery, the Jōmon linear appliqué type, from around 10,000 BCE. The antiquity of these potteries was first identified after World War II, through radiocarbon dating methods: "The earliest pottery, the linear applique type, was dated by radiocarbon methods taken on samples of carbonized material at 12500 +- 350 before present" (Prehistoric Japan, Keiji Imamura).

Art works from the 319 Hōryū-ji Treasures, originally donated to the Imperial Household by Hōryū-ji in 1878, are exhibited in six rooms. The building was designed by Yoshio Taniguchi and furnished with the latest in conservation technology, and opened in 1999 after a full renovation. The reference room on the 2nd floor mezzanine houses the "digital archive" which allows visitors to view the entire collection of Horyuji Treasures on computer with explanations provided in Japanese, Korean, Chinese, English, French, and German. A restaurant is located on the first floor. 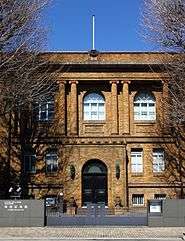 The Kuroda Memorial Hall (黒田記念館, Kuroda kinenkan), built in 1928 to the design of Okada Shinichirō (岡田信一郎), houses and displays works by Kuroda Seiki. From 1930 the building housed the Art Research Institute, which developed into the Tokyo Research Institute for Cultural Properties. After the Institute moved to new premises in 2000, the Kuroda Memorial Hall reopened with a new gallery the following year. With the reorganization of the IAI National Institute for Cultural Heritage in 2007, the Kuroda Memorial Hall was transferred to the Tokyo National Museum. The gallery reopened after further renewal on 2 January 2015 and is accessible to the general public for a fortnight each January, another fortnight in Spring, and a further fortnight in Autumn. The collection includes 126 oil paintings, 170 drawings, sketchbooks, letters, and other materials relating to the leading yōga artist.[7][8][9]

The Research and Information Center was established in 1984 mainly for scholarly use. It deals with various documents related to archaeological objects, fine art, applied arts, and historic materials of Asia and the Middle East, with a special emphasis on Japan's legacy. Visitors may browse through books, magazines, and large-format art books on the open stacks, as well as monochrome and color photographs in the photo cabinets. Admission is free. Materials are mostly in Japanese only.

Available Materials Books: Books and magazines (Japanese, Chinese, European), including exhibition catalogues and archaeological reports. Photographs: Color and monochrome photographs of arts, crafts, and archaeological findings of Japan, Korea, China, and other Asian countries, mainly from the collections of the Tokyo National Museum.

Image Reproductions Images stocked at Tokyo National Museum are lent for academic or commercial use by color duplicates, digital data or printing papers.