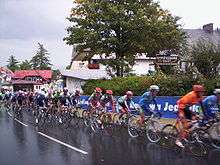 The peloton in the 2004 Tour of Poland

The Tour de Pologne (French for "Tour of Poland"), official abbreviation TdP, is a road bicycle racing stage race. It consists of seven or eight stages and is usually around 1,200 km in length. The race was first held in 1928. Until 1952 the race was held sporadically, but since then it has been an annual race. Until early 1993 the race was open to amateur cyclists only and most of its winners came from Poland.

The initial concept of the TdP's multi-stage format was modeled after the popular Tour de France. The proposal for organizing the event was submitted jointly by the Warsaw Cycling Society and the Przegląd Sportowy sports newspaper published in Kraków. Thanks to their initiative, a Wyścig Dookoła Polski (Race Around Poland, the original name of the TdP) was held in the summer of 1928 . The historic first edition of the race took place on 7–11 September 1928. 71 cyclists rode almost 1,500 km — the winner was Felix Więcek from the Bydgoszcz Cycling Club.

Until the outbreak of World War II, the TdP took place four times, two of which — in the years 1937 and 1939 - were won by the "Tiger of the Roads" - Bolesław Napierała.

The early races differed significantly from today's. The stages were much longer (often a distance of 300 km), and riders repeatedly caught flat tires on stone-chipped roads, and made stops at local restaurants.

After the war, the idea of a cycling competition around Poland was reborn. In 1947, thanks to the cooperation of the Polish Cycling Association, the publishing house "Czytelnik" and a group of journalists, the race was reactivated after an 8-year break. The winner after just four stages and only 606 km (the shortest route in the history of the TdP) was Stanislaw Grzelak (Tramwajarz Lodz). Until 1993 it was not possible for the organizers of TdP to achieve an adequate rank for their event. This was due to the official stance of the authorities and the favoring of a different cycling event — the Peace Race. Noteworthy moments from that time period: triumphs of foreign cyclists — Francesco Locatelli (1949), Roger Diercken (1960), José Viejo (1972) and André Delcroix (from 1974), the longest edition of the race - 2,311 km and 13 stages (in 1953) and the hat-trick of victories of Marian Wieckowski (1954–56), matched only by Dariusz Baranowski (1991–93).

Since 1993, Czesław Lang, the 1980 Summer Olympics cycling silver medalist and the winner of the 1980 TdP, took over the function of TdP Director. Thanks to his persistent efforts, the TdP is now a UCI World Ranking event.

In 1997, during the UCI congress in San Sebastian, TdP advanced to the professional category of 2.4, and was now classified as a "National Race" (first of its kind in Central and Eastern European countries).

In at the 1999 World Championships in Verona, the UCI Technical Commission promoted the race to Class 2.3. On 12 October 2001 the Tour was promoted to category 2.2.

In the 2005 decision of the UCI, the TdP has been included in the elite of cycling events — the UCI ProTour. The composition of the sample were three Grand Tours: Giro d'Italia, Tour de France, Vuelta a España, classic World Cup, staged races 2.HC category (i.e. Paris–Nice, Tour de Suisse), the classics 1.HC (i.e. La Flèche Wallonne - The Walloon Arrow) and the TdP, which was advanced by 2 categories to 2HC.