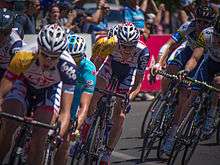 Born in Sint-Truiden, Wellens has competed as a professional since the middle of the 2012 season,[2] joining the Lotto–Belisol team after three seasons with the squad's development team. Wellens made his début with the team at the GP José Dubois, where he finished eighth; he later made his first appearances on the UCI World Tour, by competing in the Canadian pair of races in Quebec, and Montreal attempting to bridge to each race's breakaway during the respective events.[3][4] Wellens performed strongly in the season-ending Tour of Beijing, finishing each of the race's stages inside the top 25 placings – taking a best of fifth on the final stage – en route to a final overall placing of tenth,[5][6] and second to Saxo Bank–Tinkoff Bank rider Rafał Majka in the young rider classification.[7]

In August 2014, Wellens won the General classification and Stage 6 in the Eneco Tour. He was named in the start list for the 2015 Tour de France.[8]