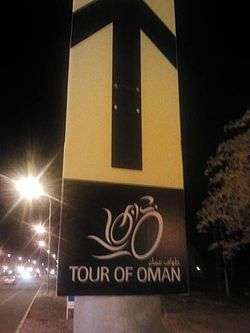 Tour of Oman banner on a lighting pole in Nakhl, Oman on February 21, 2014

The Tour of Oman is an annual professional road bicycle racing stage race held in Oman since 2010 as part of the UCI Asia Tour. The race is classified as a 2.HC (as of 2012). The race is organized by the Amaury Sport Organisation, and was held for the first time between 14 and 19 February 2010.[2] The race is a men's competition consisting of six stages. The race contains mainly flat stages, with some hillier parts.

During the race, the leader of the General Classification wears a red jersey, the leader of sprinter's points classification is denoted by a green jersey and best young rider by white. The race does not contain a mountains jersey. The most aggressive rider wears a white jersey with green and red polka-dots.

The inaugural edition of the race in 2010, consisted of 6 stages, beginning with a 16-lap criterium in Muscat Corniche and ending with an 18.6 km time trial, also in Muscat.[3] Fabian Cancellara won this event after coming second in the final time trial to Edvald Boasson Hagen.[4]