Born in Rostock, East Germany, Greipel is a pure sprinter who is among the most prolific cyclists of his era with regard to the number of his wins. His major successes have included 20 stage victories at Grand Tours: 10 at the Tour de France, 4 at the Vuelta a España, and 6 at the Giro d'Italia. Also he won the points classification in the 2009 Vuelta a España. He also prevailed in the classic Paris–Bourges and won the overall classification of the Australian race Tour Down Under twice, in 2008 and 2010.

Greipel (center) at the 2010 Tour Down Under, which he won

The 2008 Tour Down Under was to be the revelation for Greipel. He won the overall classification by a narrow margin of 7 seconds on the local Allan Davis of Team UniSA-Australia. He also earned the points classification thanks to an impressive 4 stage wins out of a possibility of 6.[3] Later in the season, he won his first Grand Tour stage in the Giro d'Italia.

In the 2009 Vuelta a España, Greipel competed as Team Columbia–HTC top sprinter benefiting from flat stages and the Columbia lead-out team. He won 4 stages including the prestigious last one after group sprints. He also won the "Green Jersey" Points Classification. Greipel finished the 2009 season with an impressive 20 wins, second in victories only to his teammate Mark Cavendish.[4]

In 2010, he started the year with his second overall victory at the Tour Down Under. He achieved that result thanks to 3 stages triumphs. The 4-second bonuses awarded to the winner of each stages helped him carry on to the top of the podium.[5] In April, Greipel completely dominated the Tour of Turkey in terms of stage wins, winning 5 stages out of 8 including the opening time trial. He finished eighth overall and earned the points classification jersey.[6] He later conquered his second Giro d'Italia stage. 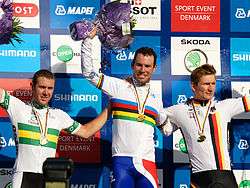 In 2011, after moving to Omega Pharma–Lotto, he had his first Tour de France victory on stage 10, inching out his biggest rival and former teammate Mark Cavendish in a sprint in Carmaux.[7] Greipel later took the bronze medal at the World Road Race Championships in Copenhagen, after coming third in the mass sprint behind Cavendish and Matt Goss, another former HTC teammate. 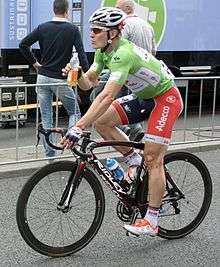 Greipel at the 2012 World Ports Classic

At the Tour de France, Greipel and his Lotto–Belisol teammates had high hopes for stage victories. It almost happened on Stage 2, where he was edged on the line by Mark Cavendish despite having a "nearly perfect lead out train" by his own admission.[8] On the next bunch sprint stage (Stage 4 finishing in Rouen), a crash occurred with a little less than 3 kilometers to go, which included Cavendish among other riders. Greipel steered clear of the accident and won the sprint by beating Alessandro Petacchi (Lampre–ISD) and Tom Veelers (Argos–Shimano).[9] Greipel repeated the feat the very next day on Stage 5, taking his second win in a row while the peloton reached the escapees in Saint-Quentin inside the final kilometer. Cavendish was part of the sprint this time around, finishing fifth.[10] He was the victor again on Stage 13, surviving the short but steep category 3 climb Mont-Saint-Clair situated 23 km (14.3 mi) from the finish and clawed his way back to the bunch in the following flat section. A few late attacks were reeled in during the final kilometers and he edged Peter Sagan on the line to take his third win of the Tour.[11]

In August, Greipel took second place after winner Arnaud Démare (FDJ–BigMat) in the Vattenfall Cyclassics, the only World Tour event disputed in Germany, his home country.[12] He stated that the scorching heat did not help matters in the 245.6 km (152.6 mi) race, and that his "engine had some cooling problems".[13] He also announced after the race that he would not participate in the World Championships in Limburg, citing the course is not suited to his characteristics.[13]

Greipel followed his second place with victories in the first two stages of the Danmark Rundt.[14] In October, Greipel reacted to the Lance Armstrong-USADA affair: "[...] the fight against cheating and the falsely-earned successes must absolutely be continued! This fight for honesty and a fair sport has already proven itself, even if cycling's reputation seems to be continually damaged." the German wrote on his blog, supportive of the investigation.[15]

Greipel started the 2013 campaign successfully in Australia by winning the Cancer Council Helpline Classic and the first stage of the Tour Down Under two days later. With that victory, Greipel equaled the record for most stage wins at this race with 12, which was held by Robbie McEwen.[16] He went on to win stages 4 and 6, establishing his own record and registering his 100th career victory in Adelaide, on the last day of the event.[17] During Stage 3 of the Tour of Turkey, it was announced to Greipel that his grandmother had died. He talked to his family after the stage and they chose to continue. The next day, he won Stage 4, surviving a climb in the final 10 kilometers to come up a victor of a group of 38 riders. He declared after the stage: "They [his family] supported me to stay here for racing. It's also good for me. It's an important race for my build-up for the Tour de France. I promised my dad that I'd win a stage for my grandmother. I'm happy I could make it."[18] He won another stage the next day.[19] In late June, Greipel won the German national road race ahead of Gerald Ciolek and John Degenkolb. He was part of an eighteen-man leading group as he won the sprint on a rainy day in Wangen im Allgäu.[20]

Greipel at the Grote Prijs Jef Scherens in September 2014

In January, Greipel started his season with a couple of stage victories in Australia at the Tour Down Under, as has become his habit in recent years.[21] He then went on to compete in the Tour of Oman, winning three stages and the points classification.[22] He crashed heavily in the finale of Gent-Wevelgem with Tyler Farrar, dislocating his collarbone and tearing off the bone's ligaments. He was successfully operated upon that same evening, but that event greatly hindered his spring campaign.[23] Greipel made his return to racing at the Tour of Turkey, where he went winless since he was still recuperating from his injuries and trying to get his form back.[24] His next victory came on Stage 4 of the Tour of Belgium. He later participated to the Tour de Luxembourg to fine-tune his form before the Tour de France, amassing 2 stage wins in the process. On the last stage, Greipel soloed to the finish line, a rare feat for such a pure sprinter.[25] Right before the Tour, Greipel added another win to his tally at the Ster ZLM Toer. At the Tour, success came on the sixth stage in Reims after rival fast men Arnaud Démare and Marcel Kittel had been dropped from the peloton. Greipel outsprinted Alexander Kristoff (Team Katusha) and Samuel Dumoulin (Ag2r–La Mondiale) to claim the first step of the podium.[26]

Greipel celebrating victory in Stage 21 of the 2015 Tour de France on the Champs-Élysées.

Greipel took his first victory of the season at the Volta ao Algarve. He then waited until the second stage of Paris–Nice to grab the next one, dedicating the victory to his mother, who he said "is going through a very hard time".[27] In April, he was denied his third victory of the season as he was edged by 3/10,000th of a second on the finish line by Alexander Kristoff at the Three Days of De Panne.[28] At the end of the month, he renewed with victory on the fourth stage of the Tour of Turkey. As some of his main rivals were dropped on a climb close to the finish, he won the sprint of the reduced group.[29] His next victory was Stage 6 of the Giro d'Italia ahead of Matteo Pelucchi and Sacha Modolo.[30] He then withdrew from the Giro ahead of stage 14.[31] He grabbed his next success on Stage 1 of the Tour de Luxembourg.[32]

At the Tour de France, Greipel was the victor of the second stage, a very windy affair that saw splits occur in the peloton. He was in the front group and out-sprinted Peter Sagan, Mark Cavendish and Fabian Cancellara.[33] On the fifth stage, a bunch sprint occurred and Greipel got the better of it by besting Sagan and Cavendish.[34] He also won the bunch sprints at the end of stages 15 in Valence and the final stage (stage 21) to Paris on the Champs-Élysées, giving him four stage victories — the most of any competitor at that year's Tour de France.[35][36]

Greipel took three sprint victories on the Giro d'Italia before deciding to withdraw before the mountains. He was wearing the red jersey when he decided to quit.[37] On 26 June, he won his third German championship in the road race, beating Max Walscheid (Team Giant–Alpecin) and Marcel Kittel (Etixx–Quick-Step) in a bunch sprint in Erfurt.[38]

He currently lives in Hürth, close to Cologne in Germany. After his win of the 2008 Tour Down Under, he was nicknamed the "Gorilla" by various sports media.[3]