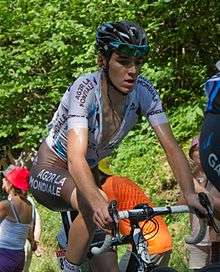 Bardet turned professional in 2012.[1] He distinguished himself in the 2012 Tour of Turkey especially in the 3rd stage, which was a mountain affair, where he attacked relentlessly to finally take fifth place.[2] He also finished fifth overall in this stage race.[3]

In Stage 5 (a mountain stage) of the Critérium du Dauphiné, Bardet attacked the leading group at the end of the penultimate climb of the day. He gained a minute on the technical descent, then climbed up to the ski resort of Pra Loup to win the stage solo, 36 seconds of ahead of second-placed Tejay van Garderen.[4]

At the 2015 Tour de France, Bardet and Thibaut Pinot were part of a breakaway and led over the top of the final climb (Côte de la Croix Neuve) of Stage 14. However, the pair were caught and overtaken by Steve Cummings (MTN-Qhubeka) on the short descent to the finish at Mende Aerodrome, and Bardet finished third in the stage. On 23 July 2015, after a solo breakaway, Bardet won Stage 18, a mountain stage. It was his first ever Tour de France stage victory.[5] The next day, he claimed the polka dot jersey for the first time, after finishing fifth in Stage 19, another mountain stage.[6] However, he lost the polka dot jersey to Chris Froome on Stage 20. Bardet finished in ninth place in the final general classification and won the combativity award of the 2015 Tour de France 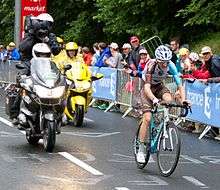 In February 2016, Bardet repeatedly attacked Nibali during Stage 4 of the 2016 Tour of Oman and ultimately finished the stage in second position, 9 seconds behind him. Bardet finished the Tour of Oman second overall, 15 seconds behind Vincenzo Nibali (Astana).[7] In June, Bardet attacked during Stage 6 of Critérium du Dauphiné and ultimately finished second in the stage after being outsprinted by Thibaut Pinot to the finish line in Méribel. After Stage 6, Bardet rose to third overall in the general classification, 21 seconds behind the leader Chris Froome.[8]Bardet finished second overall in the Critérium du Dauphiné final general classification, 12 seconds behind Froome.[9]

On Stage 19 of the 2016 Tour de France, Bardet and his team mate Mikaël Cherel attacked together on a wet descent before the penultimate climb. Bardet escaped the yellow jersey group on the lower slopes of Mont Blanc with 10km to go. Bardet caught the breakaway survivor Rui Costa with 7km to go, dropped him on the steepest pitches of the final climb with 3.2km remaining and won the stage by 23 seconds over second-placed Joaquim Rodríguez. He was the first and only Frenchman to win a stage in the 2016 Tour de France. After winning Stage 19, Bardet rose from fifth to second overall in the general classification. He finished the 2016 Tour de France in second position in the final general classification, 4:05 behind Chris Froome.[10] Bardet thus became just the sixth Frenchman to finish in the top three in the final general classification of the last 30 editions of the Tour de France, the other five were Thibaut Pinot(2014), Jean-Christophe Péraud(2014), Richard Virenque(1996, 1997), Laurent Fignon(1989) and Jean-François Bernard(1987).[11]

Bardet was selected to represent France at the 2016 Summer Olympics in the individual road race. He finished the road race in 24th position.

Bardet lives in Clermont-Ferrand.[12] Alongside his professional cycling career, Romain Bardet began business studies in 2011, in the Grande École program adapted to high-level athletes in Grenoble School of Management.[13] He should obtain his Postgraduate diploma in Management in 2015. Bardet is rare among professional cyclists in that he is fat-adapted rather than carb loading.