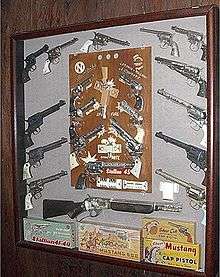 A collection of toy cap guns

Toy weapons are toys which appear as real weapons, but are designed for children to play with, and are not hazardous.

Some are essentially similar to actual weapons, but less powerful. Metal and wooden weapons for cutting and stabbing, such as swords, have dull blades that are usually made with plastic. Toy guns either cannot really shoot projectiles or just soft ones such as cork shooting pop guns or "Nerf" darts with limited velocity. 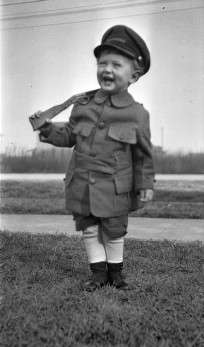 However, cap pistols use caps with extremely small amounts of explosives for the sound effect. Toy hand grenades do not contain explosives except for a cap. BB guns are often called toy guns, but their shots can cause body harm.

Many newer toy weapons are brightly colored and oddly shaped to appeal to children and distinguish them from the real thing (see Dangers below). For example, a toy that shoots Nerf balls might have a rounded shape and a neon yellow color.

For big weapons, the toy version is usually on a smaller scale. It might be much smaller, such as a toy catapult that is 20 centimetres (8 in) tall. Or it might just be sized for children, such as a water pistol that is half the size of a similar firearm.

A prop weapon (such as a stage gun or a stage sword) has to look real, but like a toy weapon, it should not be dangerous. A woodworking business, the Parris Manufacturing Company was contracted by the United States Government to provide over 2 million accurate copies of the M1903 Springfield rifles, the MK 1 USN Dummy Training Rifle for the large World War II US armed forces. After the war they manufactured and sold their replicas to drill teams and to children as toy guns.[1]

Children have always had small imitations of things from the adult world and toy weapons are no exception. From a hand-carved wooden replica to factory-produced pop guns and cap guns, toy weapons came in all sizes, prices and materials from wood to metal.

With the influence of Hollywood and comic strips, tie-ins could make an ordinary toy gun a major bestseller. In the 1930s Daisy Outdoor Products came out with a Buck Rogers Rocket Pistol (1933), Disintegrator Pistol (1934), and Liquid Helium Pistol (1935) that sold in record numbers.[2]

In 1940, Daisy went from spacemen to cowboys with their Red Ryder BB Gun that still is in production today. Though the Red Ryder comic strip is not as popular as it was with its spin-offs on radio and the cinema, the Red Ryder BB Gun gained a new life from the film A Christmas Story based on Jean Shepherd's short stories. However, it was the Buck Jones BB gun, rather than the Red Ryder one that featured a compass and sundial in the stock. In the 1950s motion pictures and television heroes Roy Rogers, Gene Autry, Hopalong Cassidy and Davy Crockett added their names to toy six shooters and rifles.

Mattel had used television advertising to sell their "burp gun" on The Mickey Mouse Club in the mid-1950s to great effect. In 1959 Mattel sponsored their own television show Matty's Funday Funnies with their trademark little boy "Matty" showing cartoons and advertising their products. Mattel toys came out with Dick Tracy weapons in 1960 that were state of the art. Not only could the "Dick Tracy Crimestoppers" have a realistic snubnosed revolver in a shoulder holster, but Mattel also boosted junior law enforcement firepower with a Dick Tracy cap firing tommy gun that fired a burst of 6 caps automatically when the M-1 Thompson-style bolt was pulled back. One commercial featured Billy Mumy demonstrating the weapons to his father prior to watching Dick Tracy on TV. Mattel also came up with a "Dick Tracy Water Jet Gun" that was a miniature replica of a police pump action shotgun that fired caps when you pulled the trigger and squirted water when you pumped the slide. When the Dick Tracy craze faded the same two weapons were reissued in military camouflage as Green Beret "Guerrilla Fighter" weapons. (see United States Army Special Forces in popular culture). Mattel later issued the same tommy gun in its original colours as a Planet of the Apes tie-in complete with ape mask.

In the mid-1960s, Multiple Toymakers/Multiple Plastics Corporation (MPC) came out with James Bond's attache case from From Russia with Love. Topper Toys replied with a copy called "Secret Sam" that featured a toy gun that fired plastic bullets through the attache case and had a working camera that outsold 007's kit. MPC toys replied with a "B.A.R.K" - "Bond Assault and Raider Kit" an attache case that opened up to display a firing mortar and a rocket shooting pistol. MPC also provided a "Bond-O-Matic" water pistol. Bond's television competition The Man From UNCLE had their pistol with attachments that turned it into a rifle made by both the Ideal Toy Company in the US and the Lone Star Toys company in the United Kingdom. Mattel came out with a series of "Zero-M" secret agent weapons such as a camera turning into a pistol and a radio turning into a rifle demonstrated by a juvenile Agent Zero M played by Kurt Russell.

Perhaps inspired by Zulu but not advertised as a film tie in, a mid-1960s child's toy blowgun the size of a ball point pen called a "Zulugun" was produced that shot plastic sticking darts that were often inhaled and swallowed.[3]

Perhaps the ultimate toy weapon was the 1964 Topper Toys Johnny Seven OMA (One Man Army) where an exciting television commercial showed one little boy using each of the seven weapons of the gun to wipe out a neighborhood full of children armed only with ordinary toy guns. Though an amazing seller, the Captain Kangaroo television program refused to air the advertisement. The proliferation of toy weapons was satirized in the "Our Man in Toyland" episode of Get Smart.

Toy weapons can cause harm like many objects not under proper supervision. BB guns which were sold as toys can and have caused lethal injury, as well as property damage. Unlike most other toys though, much of the danger of these toys is related to mistaking a real weapon for a toy weapon or vice versa.

As plastic replaced wood and metal in toy weapon manufacture, so did real weapons such as the M-16 start a trend to use plastic in manufacturing modern assault rifles. Current military rifles such as the Steyr AUG now resemble children's toys. Technological advancement also enabled weapons to be the same size of toy weapons. In previous days Colt Peacemaker pistols, Winchester lever action rifles, tommy guns, and Louis Marx and Company children's versions of the M-1 and M-14 were noticeably scaled down in size and unlikely to be mistaken for the real thing. From the 1960s weapons like the Uzi and Mac-10 submachine guns are the same size as children's toys.

Problems with toy weapons that look similar to real firearms can include:

Therefore, these toy weapons are forbidden or regulated in some countries. In the United States, in 1992 the Department of Commerce prohibited the manufacture, sale, or shipping of toy firearms unless they have an orange tip or are entirely brightly colored. The regulation does not prohibit end-users from modifying the toys.

There is a controversy as to whether or not toy weapons are appropriate for children to play with. Some people believe they can encourage violence.

In 2007, the British Department for Children, Schools and Families (which existed between 2007 and 2010) has advised young boys be encouraged to play with toy guns, as it will encourage them to learn and foster their development.[4] However, the National Union of Teachers in England has criticised this advice, arguing that toy guns "symbolise aggression" and that encouraging boys to play with them fosters gender stereotypes.[4]

Jean Shepherd's alleged encounter with an elderly woman wearing a "DISARM THE TOY INDUSTRY" button led to his writing his nostalgic story about his Red Ryder BB Gun Duel in the Snow, or Red Ryder Nails the Cleveland Street Kid published in Playboy magazine in 1964. The story became part of his 1966 collection In God We Trust, All Others Pay Cash that was used as the basis of the film A Christmas Story.[5]

English Children's Clown Barney Baloney AKA Tony Turner is a practitioner of balloon modelling. He was banned from providing children with shaped toy balloons because a national supermarket chain said the latex may be harmful. Barney stated "I also go into schools to entertain children and recently in Rotherham I was told that I mustn't make guns out of balloons because it could encourage violence but I was told it was okay to make swords".[7]

In the United States, federal law and regulations indicate that all airsoft guns transported or imported into the country must have a 6mm wide blaze orange tip or a blaze orange stripe 1 inch (2.54 centimeters) thick on both sides of the barrel. Many retailers now place disclaimers on their toy weaponry stating that airsoft guns are sold with this orange tip, and removing it will be punishable by law.

Chicago goes even further with their mandates. It is considered a crime to wield a look-alike/replica gun (e. g. toy gun, airsoft gun) in public. Also in Chicago, if a toy gun or replica gun is used to commit a crime, then that person is treated as though they had actually used a real firearm.

Averages of four deaths per year, as published by the U. S. Consumer Product Safety Commission in “BB Guns Can Kill,” October 2004, are caused by BB guns and pellet rifles. The Centers for Disease Control and Prevention (CDC) even warn people that some of these guns, at close proximity, have capabilities of shooting projectiles such as pellets or BBs at velocities that are similar to actual pistols.

The CDC released a report named “BB and Pellet Gun- Related injuries” Data timed between June 1992 and May 1994:[8]

• A nine-year-old boy was struck by a BB beneath his lower left eyelid after he stepped from behind a board at which other children were shooting.

• A sixteen-year-old sustained a severe mid-brain injury from a self-inflicted combination BB/pellet gunshot wound through the roof of his mouth.

• A nine-year-old incurred a pellet injury to the back of her right ankle after a boy fired a pellet at her from a passing car.

• A ten-year-old sustained injuries to his neck and trachea after being struck by a BB from a gun that had been fired unintentionally.

• A thirteen-year-old was shot in the neck with a BB gun when a friend pulled the trigger, believing the gun was not loaded.

• A sixteen-year-old boy sustained a penetrating injury to his right eye after being struck by a BB that ricocheted from a gun fired by a friend.

The report also estimated more than 47,000 children and teenagers were injured by BB or pellet wounds in emergency rooms and hospitals.