View of the Entrance to the Arsenal, by Canaletto, 1732. 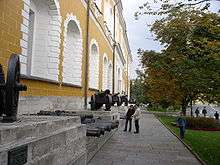 Cannons and mortars of Napoleon's Army exhibited along the wall of the Kremlin Arsenal. 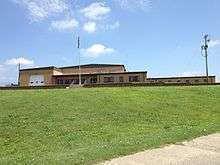 An arsenal is a place where arms and ammunition are made, maintained and repaired, stored, or issued, in any combination, whether privately or publicly owned. Arsenal and armoury (British English) or armory (US spelling[1][2]) are mostly regarded as synonyms, although subtle differences in usage exist.

A sub-armory is a place of temporary storage or carrying of weapons and ammunition, such as any temporary post or patrol vehicle that is only operational in certain times of the day.[3]

A lower-class arsenal, which can furnish the materiel and equipment of a small army, may contain a laboratory, gun and carriage factories, small-arms ammunition, small-arms, harness, saddlery tent and powder factories; in addition, it must possess great store-houses. In a second-class arsenal, the factories would be replaced by workshops. The situation of an arsenal should be governed by strategic considerations. If of the first class, it should be situated at the base of operations and supply, secure from attack, not too near a frontier, and placed so as to draw in readily the resources of the country. The importance of a large arsenal is such that its defences would be on the scale of those of a large fortress.

In the early twentyfirst century the term "floating armoury" described a ship storing weapons to be supplied to merchant vessels in international waters subject to piracy, so that the weapons do not enter territorial waters where they would be illegal.

The usual subdivision of branches in a great arsenal is into storekeeping, construction and administration.

In the manufacturing branches are required skill, and efficient and economical work, both executive and administrative; in the storekeeping part, good arrangement, great care, thorough knowledge of all warlike stores, both in their active and passive state, and scrupulous exactness in the custody, issue and receipt of stores. Frederick Taylor introduced command and control techniques to arsenals, including the U.S.'s Watertown Arsenal (a principal center for artillery design and manufacture) and Frankford Arsenal (a principal center for small arms ammunition design and manufacture).