Trade unions in the United Kingdom

Trade unions in the United Kingdom were first decriminalised under the recommendation of a Royal Commission in 1867, which agreed that the establishment of the organisations was to the advantage of both employers and employees. Legalised in 1871, the trade union movement sought to reform socio-economic conditions for working men in British industries, and the trade unions' search for this led to the creation of a Labour Representation Committee which effectively formed the basis for today's Labour Party, which still has extensive links with the Trade Union Movement in Britain. Margaret Thatcher's governments weakened the powers of the unions in the 1980s, in particular by making it more difficult to strike legally, and some within the British trades union movement criticised Tony Blair's Labour government for not reversing some of Thatcher's changes. Most British unions are members of the TUC, the Trades Union Congress (founded in 1867), or where appropriate, the Scottish Trades Union Congress or the Irish Congress of Trade Unions, which are the country's principal national trade union centres.

Main article: History of trade unions in the United Kingdom

Much like corporations,[2] trade unions were regarded as criminal until the Combination Act 1825, and were regarded as quasi-legal organisations, subjected to the restraint of trade doctrine, until the Trade Union Act 1871. This Act abolished common law restrictions, but took an abstentionist stance to unions internal affairs. The Trade Disputes Act 1906 exempted trade-union funds from liability in action for damages for torts, and this freedom gave future union pickets a great deal of power.

The principle that the common law enforced a union's own rules, and that unions were free to arrange their affairs is reflected in the ILO Freedom of Association Convention, and article 11 of the European Convention on Human Rights, subject to the requirement that regulations "necessary in a democratic society" may be imposed. Unions must have an executive body and that executive must, under TULRCA 1992 sections 46 to 56, be elected at least every five years, directly in a secret, equal postal vote of union members.

The structure of the unions were based in contract and the rights of members depended on being able to show some proprietary interest to be specifically enforced.[3] This meant that the express terms of the union rule book can, like any contract, be supplemented with implied terms by the courts as strictly necessary to reflect the reasonable expectations of the parties,[4] for instance, by implying the Electoral Reform Service's guidance to say what happens in a tie break situation during an election when the union rules are silent.[5] If there are irregular occurrences in the affairs of the union, for instance if negligence or mismanagement is not alleged and a majority could vote on the issue to forgive them, then members have no individual rights to contest executive decision making.[6] However, if a union's leadership acts ultra vires, beyond its powers set out in the union constitution, if the alleged wrongdoers are in control, if a special supra-majority procedure is flouted, or a member's personal right is broken, the members may bring a derivative claim in court to sue or restrain the executive members. So in Edwards v Halliwell[7] a decision of the executive committee of the National Union of Vehicle Builders to increase membership fees, which were set in the constitution and required a ⅔ majority vote, was able to be restrained by a claim from individual members because this touched both a personal right under the constitution and flouted a special procedure. 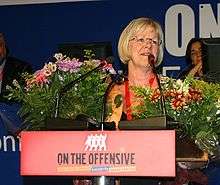 The ETUC, headed by Wanja Lundby-Wedin until May 2011, is the union federation for 37 European countries, the counterpart for the TUC of the UK and the ITUC internationally.

Margaret Thatcher's Conservative government starting in 1979 saw trade unions as an obstacle to economic growth and passed restrictive legislation of the sort the Tories had long avoided.[8]

Union membership declined in parallel with the reduction in size of many traditional industries which had been highly unionised, such as steel, coal, printing, and the docks.[11]

In 2015, the Conservative government introduced a new Trade Union Bill, which proposes stricter ballot thresholds for industrial action, further restraints on picketing and a requirement that union members ‘opt in’ to political funds.[12]