Media of the United Kingdom 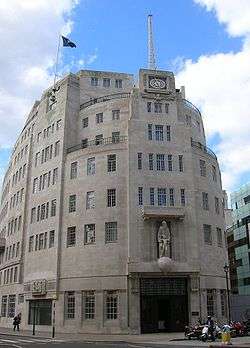 Broadcasting House in London is the headquarters of the BBC.

There are several different types of media in the United Kingdom: television, radio, newspapers, magazines and websites. The country also has a strong music industry. The United Kingdom has a diverse range of providers, the most prominent being the state-owned public service broadcaster, the British Broadcasting Corporation (BBC). The BBC's largest competitors are ITV plc, which operates 11 of the 15 regional television broadcasters that make up the ITV Network, and News Corporation, which holds a large stake in the satellite broadcaster British Sky Broadcasting and also operates a number of leading national newspapers. Regional media is covered by local radio, television and print newspapers. Trinity Mirror operates 240 local and regional newspapers, as well as national newspapers such as the Daily Mirror and the Sunday Mirror.

Mediacity in Greater Manchester, privately funded and publicly backed by the BBC is the largest media-production facility in the United Kingdom.

In 2009 it was estimated that individuals viewed a mean of 3.75 hours of television per day and listened to 2.81 hours of radio. The main BBC public service broadcasting channels accounted for and estimated 28.4% of all television viewing; the three main independent channels accounted for 29.5% and the increasingly important other satellite and digital channels for the remaining 42.1%.[1] Sales of newspapers have fallen since the 1970s and in 2009 42% of people reported reading a daily national newspaper.[2] In 2010, 82.5% of the United Kingdom population were Internet users, the highest proportion amongst the 20 countries with the largest total number of users in that year.[3]

London dominates the media sector in the United Kingdom: national newspapers,television and radio are largely based there, notable centres include Fleet Street and BBC Broadcasting House.

The Guardian national newspaper was founded in Manchester in 1821, and was known as the Manchester Guardian until 1959. In the 1950s, coinciding with the growth in television, the Granada Television franchise was set up by Sidney Bernstein. Consequently, the Granada Studios were the first purpose-built television studios in the United Kingdom. The franchise produced television programmes such as Coronation Street and the Up Series. The BBC currently has two of its six major business divisions based here BBC North Group that comprises a number of important departments including BBC Breakfast, BBC Children's, BBC Sport, BBC Radio 5 and BBC North West. The other division is BBC Future Media. In addition ITV has two major divisions of its business based here ITV Studios responsible for UK and international network production and ITV Granada its regional service provider. The University of Salford also has a media campus and research center based at media city.[4]

The United Kingdom is known for its large music industry, along with its new and upcoming artists. In the UK, media is spread through the forms of TV, newspapers, magazines, websites, and radio. Great Manchester is the hottest place to receive media information in the UK.

Edinburgh and Glasgow, and Cardiff, are important centres of newspaper and broadcasting production in Scotland and Wales respectively.[7]

Other major players in the United Kingdom media include ITV plc, which operates 11 of the 15 regional television broadcasters that make up the ITV Network,[10] and News Corporation, which owns a number of national newspapers through News International such as the tabloid The Sun and "broadsheet" The Times,[11] as well as holding a large stake in satellite broadcaster British Sky Broadcasting.[12]

The United Kingdom print publishing sector, including books, server, directories and databases, journals, magazines and business media, newspapers and news agencies, has a combined turnover of around £20 billion and employs around 167,000 people. The print media sector is entirely regulating itself and there are no specific statutory rules regulating the print media.[13]

Main articles: List of newspapers in the United Kingdom and History of British newspapers

Traditionally British newspapers have been divided into "quality", serious-minded newspapers (usually referred to as "broadsheets" because of their large size) and the more populist, "tabloid" varieties. For convenience of reading many traditional broadsheets have switched to a more compact-sized format, traditionally used by tabloids. In 2008 The Sun had the highest circulation of any daily newspaper in the United Kingdom at 3.1 million, approximately a quarter of the market.[14] Its sister paper, the News of the World, had the highest circulation in the Sunday newspaper market,[14] and traditionally focused on celebrity-led stories until its closure in 2011.[15] The Daily Telegraph, a centre-right broadsheet paper, is the highest-selling of the "quality" newspapers.[14] The Guardian is a more liberal "quality" broadsheet and the Financial Times is the main business newspaper, printed on distinctive salmon-pink broadsheet paper.[16] Trinity Mirror operates 240 local and regional newspapers in the United Kingdom, as well as national newspapers such as the Daily Mirror and the Sunday Mirror.[17]

A large range of magazines are sold in the United Kingdom covering most interests and potential topics. British magazines and journals that have achieved worldwide circulation include The Economist, Nature, and New Scientist, Private Eye, Hello!, The Spectator, the Radio Times and NME. 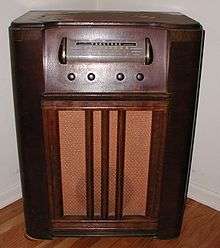 Radio in the United Kingdom is dominated by the BBC, which operates radio stations both in the United Kingdom and abroad. The BBC World Service radio network is broadcast in 33 languages globally. Domestically the BBC also operates ten national networks and over 40 local radio stations including services in Welsh on BBC Radio Cymru, Gaelic on BBC Radio nan Gàidheal in Scotland and Irish in Northern Ireland.[19] The domestic services of the BBC are funded by the television licence.[20] The internationally targeted BBC World Service Radio is funded by the Foreign and Commonwealth Office, though from 2014 it will be funded by the television licence.[21] The most popular radio station by number of listeners is BBC Radio 2, closely followed by BBC Radio 4. Advances in digital radio technology have enabled the launch of several new stations by the Corporation.[22]

Rather than operating as independent entities, many commercial local radio stations are owned by large radio groups which broadcast a similar format to many areas. The largest operator of radio stations is Global Radio, owner of the major Heart and Galaxy radio brands. It also owns Classic FM and London's most popular commercial radio station, 95.8 CapitalFM. Other owners are UTV Radio, with stations broadcasting in large city areas and Bauer Radio, holding radio in the North of England. There are also regional stations, like Real Radio and the Century Network, broadcasting in some main parts of England, Wales and Scotland, and a number of licensed community radio stations[23] which broadcast to local audiences. 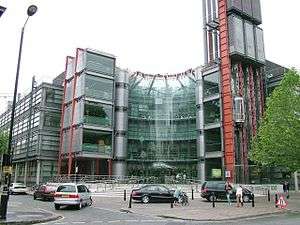 The United Kingdom has no analogue television. A free to air digital service is made up of two chartered public broadcasting companies, the BBC and Channel 4 and two franchised commercial television companies, (ITV and Channel 5). In addition to this, the United Kingdom's free-to-air Freeview service runs a large number of Entertainment, Music, Sport and Shopping channels from the likes of CBS, UKTV and British Sky Broadcasting. There are five major nationwide television channels: BBC One, BBC Two, ITV, Channel 4 and Channel 5—currently transmitted by digital terrestrial, free-to-air signals with the latter three channels funded by commercial advertising. The vast majority of digital cable television services are provided by Virgin Media with satellite television available from Freesat or British Sky Broadcasting and free-to-air digital terrestrial television by Freeview. The entire country switched to digital (from a previously analogue signal) in 2012.[24]

Channel 4 is similarly chartered to the BBC, with a remit to provide public service broadcasting and schools programs, however it runs commercial advertisements to provide a revenue stream. It produces a number of digital channels, branded as Channel 4, as well as E4, More 4 and Film4.

The commercial operators rely on advertising for their revenue, and are run as commercial ventures, in contrast to the public service operators. The ITV franchise transmits the 3 different networks in different parts of the country. These are known as ITV (in England, Wales, Scottish Borders, Isle of Man and Channel Islands), STV (In Central and Northern Scotland), and UTV in Northern Ireland.

The UK's country code top-level domain (ccTLD) is .uk. The most visited ".uk" website is the British version of Google, followed by Amazon, eBay, BBC Online and MailOnline.[26]