The Treaty of London (1913) was signed on 30 May during the London Conference of 1912–13. It dealt with the territorial adjustments arising out of the conclusion of the First Balkan War.[1]

The combatants were the victorious Balkan League (Serbia, Greece, Kingdom of Bulgaria, and Montenegro) and the defeated Ottoman Empire. Representing the Great Powers were the United Kingdom, Germany, Russia, Austria-Hungary, and Italy.

Hostilities had officially ceased on 2 December 1912, except for Greece that had not participated in the first truce. Three principal points were in dispute:

The Treaty[2] was negotiated in London at an international conference which had opened there in December 1912, following the declaration of independence by Albania on 28 November 1912.

Austria-Hungary and Italy strongly supported the creation of an independent Albania. In part, this was consistent with Austria-Hungary's previous policy of resisting Serb expansion to the Adriatic; Italy had designs on the territory, manifested in 1939. Russia supported Serbia and Montenegro. Germany and Britain remained neutral. The balance of power struck between the members of the Balkan League had been on the assumption that no Albanian polity would be formed and Albanian territory would be split between them. 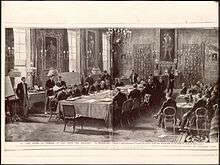 However, the division of the territories ceded to the Balkan League was not addressed in the Treaty, and Serbia refused to carry out the division agreed with Bulgaria in their treaty of March 1912. As a result of Bulgarian dissatisfaction with the de facto military division of Macedonia, the Second Balkan War broke out between the combatants on 16 June 1913.[3] A final peace was agreed at the Treaty of Bucharest on 12 August 1913.

Perceptions of the Treaty

The delineation of the exact boundaries of the Albanian state under the Protocol of Florence (17 December 1913) was highly unpopular among the local Greek population of Southern Albania (or Northern Epirus for Greeks), who after their revolt managed to declare the Autonomous Republic of Northern Epirus, which was internationally recognised as an autonomous region inside Albania under the terms of the Protocol of Corfu.[4]

Albanians have tended to regard the Treaty as an injustice imposed by the Great Powers, alleging that roughly half of the predominantly Albanian territories and 40% of the population were left outside the new country's borders.[5][6]