Mehmed V Reşâd (Ottoman Turkish: محمد خامس Meḥmed-i ẖâmis, Turkish: Mehmed V Reşad or Reşat Mehmet) (2 November 1844 – 3 July 1918) was the 35th and penultimate Ottoman Sultan. He was the son of Sultan Abdülmecid I.[2] He was succeeded by his half-brother Mehmed VI. His nine-year reign was marked by the cession of the Empire's North African territories and the Dodecanese Islands, including Rhodes, in the Italo-Turkish War, the traumatic loss of almost all of the Empire's European territories west of Constantinople in the First Balkan War, and the entry of the Empire into World War I, which would ultimately lead to the defeat and final dissolution of the Ottoman dynasty.

He was born at Topkapı Palace, Constantinople.[1] Like many other potential heirs to the throne, he was confined for 30 years in the Harems of the palace. For nine of those years he was in solitary confinement. During this time he studied poetry of the old Persian style and was an acclaimed poet. On his ninth birthday he was ceremoniously circumcised in the special Circumcision Room (Sünnet Odasi) of Topkapı Palace. 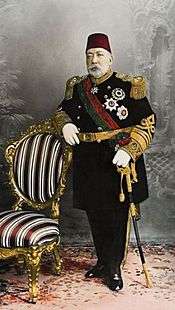 His reign began on 27 April 1909, but he was largely a figurehead with no real political power, as a consequence of the Young Turk Revolution in 1908 (which restored the Ottoman Constitution and Parliament) and especially the 1913 Ottoman coup d'état, which brought the dictatorial triumvirate of the Three Pashas to power.

Under his rule, the Ottoman Empire lost all its remaining territory in North Africa (Tripolitania, Cyrenaica and Fezzan) to Italy in the Italo-Turkish War and nearly all its European territories (except for a small strip of land west of Constantinople) in the First Balkan War.

Mehmed V's most significant political act was to formally declare jihad against the Entente Powers (Allies of World War I) on 14 November 1914, following the Ottoman government's decision to join the First World War on the side of the Central Powers.[3] He was actually said to look with disfavor on the pro-German policy of Enver Pasha.[4]

This was the last genuine proclamation of jihad in history by a Caliph, as the Caliphate lasted until 1924. The proclamation had no noticeable effect on the war, despite the fact that many Muslims lived in Ottoman territories. The Arabs eventually joined the British forces against the Ottomans with the Arab Revolt in 1916.

Mehmed V hosted Kaiser Wilhelm II, his World War I ally, in Constantinople on 15 October 1917. He was made Generalfeldmarschall of the Kingdom of Prussia on 27 January 1916, and of the German Empire on 1 February 1916.

Mehmed V died at Yıldız Palace on 3 July 1918 at the age of 73, only four months before the end of World War I.[5] Thus, he did not live to see the downfall of the Ottoman Empire. He spent most of his life at the Dolmabahçe Palace and Yıldız Palace in Istanbul. His grave is in the historic Eyüp district of the city. 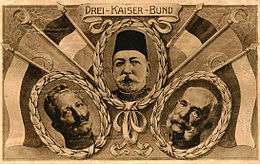 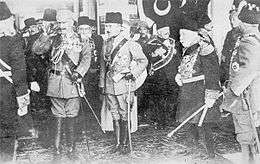 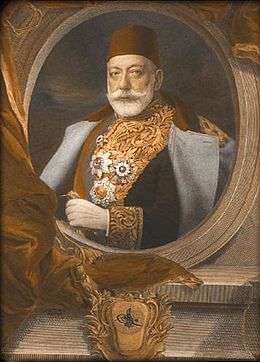 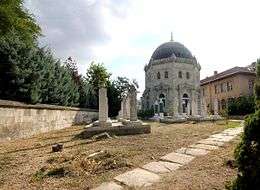 The türbe of Mehmed V is located near the Eyüp Sultan Mosque in Eyüp, Istanbul.

Mehmed V was Grand Master of the following Ottoman Orders: