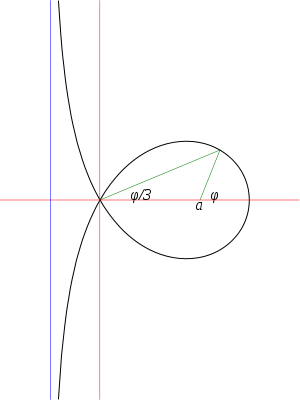 The Trisectrix of Maclaurin showing the angle trisection property

In geometry, the trisectrix of Maclaurin is a cubic plane curve notable for its trisectrix property, meaning it can be used to trisect an angle. It can be defined as locus of the point of intersection of two lines, each rotating at a uniform rate about separate points, so that the ratio of the rates of rotation is 1:3 and the lines initially coincide with the line between the two points. A generalization of this construction is called a sectrix of Maclaurin. The curve is named after Colin Maclaurin who investigated the curve in 1742.

so that when the line rotating about

with the x axis, the rotating about

be the point of intersection, then the angle formed by the lines at

The curve is therefore a member of the Conchoid of de Sluze family.

In Cartesian coordinates the equation of this curve is

If the origin is moved to (a, 0) then a derivation similar to that given above shows that the equation of the curve in polar coordinates becomes

making it an example of an epispiral.

, draw a ray from

whose angle with the

. Draw a ray from the origin to the point where the first ray intersects the curve. Then, by the construction of the curve, the angle between the second ray and the

The curve has an x-intercept at

and a double point at the origin. The vertical line

is an asymptote. The curve intersects the line x = a, or the point corresponding to the trisection of a right angle, at

. As a nodal cubic, it is of genus zero.

Relationship to other curves

The trisectrix of Maclaurin can be defined from conic sections in three ways. Specifically:

relative to the origin.