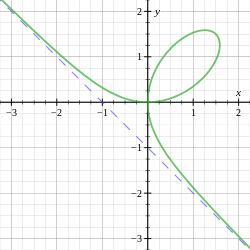 The folium of Descartes (green) with asymptote (blue).

In geometry, the folium of Descartes is an algebraic curve defined by the equation

It is symmetrical about

The name comes from the Latin word folium which means "leaf".

The curve was featured, along with a portrait of Descartes, on an Albanian stamp in 1966.

The curve was first proposed by Descartes in 1638. Its claim to fame lies in an incident in the development of calculus. Descartes challenged Fermat to find the tangent line to the curve at an arbitrary point since Fermat had recently discovered a method for finding tangent lines. Fermat solved the problem easily, something Descartes was unable to do.[1] Since the invention of calculus, the slope of the tangent line can be found easily using implicit differentiation.

Since the equation is degree 3 in both x and y, and does not factor, it is difficult to solve for one of the variables.

However, the equation in polar coordinates is:

which can be plotted easily.

Another technique is to write y = px and solve for x and y in terms of p. This yields the rational parametric equations:[2]

We can see that the parameter is related to the position on the curve as follows:

Another way of plotting the function can be derived from symmetry over y = x. The symmetry can be seen directly from its equation (x and y can be interchanged). By applying rotation of 45° CW for example, one can plot the function symmetric over rotated x axis.

This operation is equivalent to a substitution:

Plotting in the cartesian system of (u,v) gives the folium rotated by 45° and therefore symmetric by u axis.

Relationship to the trisectrix of MacLaurin

The folium of Descartes is related to the trisectrix of Maclaurin by affine transformation. To see this, start with the equation

and change variables to find the equation in a coordinate system rotated 45 degrees. This amounts to setting

plane the equation is

If we stretch the curve in the

direction by a factor of

which is the equation of the trisectrix of Maclaurin.