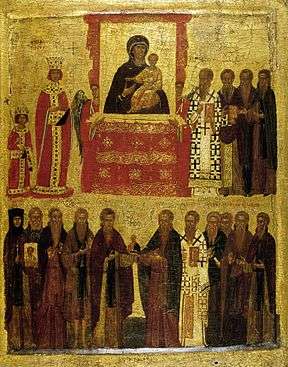 The Feast of Orthodoxy (also knowns as the Sunday of Orthodoxy or the Triumph of Orthodoxy) is celebrated on the first Sunday of Great Lent (six Sundays before Pascha) in the liturgical calendar of the Eastern Orthodox Church and Eastern Catholic Church (Eastern Catholics of Byzantine rite). The Feast is kept in memory of the final defeat of Iconoclasm and the restoration of the icons to the churches.[1]

Despite the teaching about icons defined at the Seventh Ecumenical Council in 787, the Iconoclasts began to trouble the Church again. After the death of the last Iconoclast emperor, Theophilos, his young son Michael III, with his mother the regent Theodora, and Patriarch Methodios, summoned the Synod of Constantinople in 843 to bring peace to the Church. At the end of the first session, all made a triumphal procession from the Church of Blachernae to Hagia Sophia, restoring the icons to the church. This occurred on 11 March, 843 (which that year was the first Sunday of Lent). The Synod decreed that a perpetual feast on the anniversary of that day should be observed each year on the First Sunday of Great Lent, and named the day, "the Sunday of Orthodoxy" (ἡ Κυριακὴ τῆς Ὀρθοδοξίας).[2]

The name "Orthodoxy" has gradually affected the character of the feast. Originally commemorating only the defeat of Iconoclasm, the commemoration has gradually come to be understood in a more general sense as opposition to all heterodoxy. In this way, though its first occasion is not forgotten, the feast has become one in honour of the true Faith in general. This is shown by its special service. 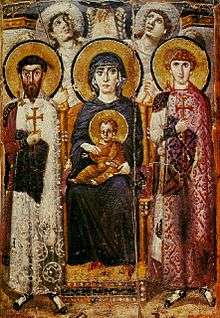 Icon of the Virgin and Child with angels and Sts. George and Theodore Stratelates, c. 600, one of a very few icons to survive Iconoclasm (encaustic on panel. Saint Catherine's Monastery, Mount Sinai).

After Orthros and before the Divine Liturgy, a procession is made with icons to some destined spot (often merely around the church). Meanwhile, a Canon, attributed to St. Theodore of Studium, is sung.

Once the procession arrives at the place, the Synodicon (decree of the Synod of Constantinople) is proclaimed aloud by the deacon. This Synodicon begins with the memory of certain saints, confessors and heroes of the faith, to each of whose names the people cry out: "Eternal Memory!" three times. Then follows a long list of heretics of all kinds, to each of which the answer is: "Anathema" once or thrice. These heretics comprise all the major opponents of the Orthodox Faith, Arians, Nestorians, Monophysites, Monothelites, Iconoclasts, and so on. Then comes again "Eternal Memory" to certain pious emperors, from Constantine the Great on.

There are inevitably differences between the Orthodox and Eastern Catholic lists, as well as minor differences between the Synodika of individual national churches. The Orthodox acclaim Photius, Michael Cerularius, other anti-Roman patriarchs and many emperors. They curse Pope Honorius among the Monothelites, the opponents of Hesychasm. The Synodicon used by Greek-Catholics tends to omit a large number of these names.

The format used by the Russian Orthodox Church differs slightly from that used among the Greek Orthodox: during the monarchy, the Emperor and his family were acclaimed, and "Eternal Memory!" was proclaimed for each member of the Romanov Dynasty; all are cursed who deny the divine right of kings and all who "dare to stir up insurrection and rebellion against it". In the Russian Orthodox Church Outside of Russia anathemas were added against modernism and ecumenism.

In Greek Orthodox churches the Creed is normally recited by the cantors in the Divine Liturgy, but on the Sunday of Orthodoxy especially it is often recited by a lay member of the congregation who is a secular official; it is a prerogative offered to the head of State, if present, in continuation of the same privilege held by the Emperors.

The liturgical texts for the Canon, Synodicon etc., and the rubrics will be found in either Triodion, Orthodox or Greek-Catholic. The theme of the day is the victory of the True Faith over heresy. "This is the victory that overcomes the world, our faith" (1 John 5:4). Also, the icons of the saints bear witness that man, "created in the image and likeness of God" (Genesis 1:26), becomes holy and godlike through the purification of himself as God's living image.

The First Sunday of Great Lent originally commemorated the Prophets such as Moses, Aaron, and Samuel. The Liturgy's Prokeimenon and alleluia verses as well as the Epistle and Gospel readings appointed for the day continue to reflect this older usage.

The name of this Sunday reflects the great significance which icons possess for the Orthodox Church. They are not optional devotional extras, but an integral part of Orthodox faith and devotion. The debate involved important issues: the character of Christ's human nature, the Christian attitude towards matter, and the true meaning of Christian redemption.[3] Icons are held by the Orthodox to be a necessary consequence of Christian faith in the Incarnation of the Word (John 1:14), Jesus Christ. Icons are considered by Orthodox Christians to have a sacramental character, making present to the believer the person or event depicted on them. However, the Orthodox always make a clear doctrinal distinction between the veneration (proskynesis) paid to icons and the worship (latria) which is due to God alone.

Since Iconoclasm was the last of the great Christological controversies to trouble the Church, its defeat is considered to be the final triumph of the Church over heresy. All subsequent heresies tend to be merely offshoots of the earlier great heresies.