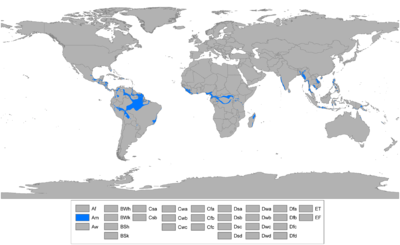 There are generally two versions of a tropical monsoon climate:

Tropical monsoon climates are most commonly found in South and Central America. However, there are sections of South Asia, Southeast Asia, Africa (particularly West and Central Africa), the Caribbean and North America that also feature this climate.

The major controlling factor over a tropical monsoon climate is its relationship to the monsoon circulation. The monsoon is a seasonal change in wind direction. In Asia, during the summer (or high-sun season) there is an onshore flow of air (air moving from ocean towards land). In the “winter” (or low-sun season) an offshore air flow (air moving from land toward water) is prevalent. The change in direction is due to the difference in the way water and land heat. October is the hottest month no matter whether is it in the southern or northern hemisphere. This is because October is the shoulder season of the year as if it is the end of the wet season and no winter winds blowing ( Northeast monsoon).

Changing pressure patterns that affect the seasonality of precipitation also occur in Africa though it generally differs from the way it operates in Asia. During the high-sun season, the Intertropical convergence zone (ITCZ) induces rain. During the low-sun season, the subtropical high creates dry conditions. The monsoon climates of Africa, and the Americas for that matter, are typically located along tradewind coasts.