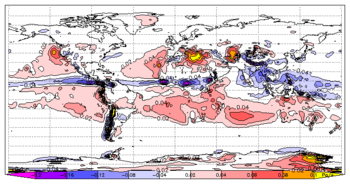 A tropical climate is a climate typically found within the tropics, while a few locations outside the Tropics are considered to have a tropical climate. In the Köppen climate classification it is a non-arid climate in which all twelve months have mean temperatures of at least 18 °C (64 °F). Unlike the subtropics, where there are significant variations in day length and temperature to various degrees, with season, tropical temperature remains relatively constant throughout the year and seasonal variations are dominated by precipitation.

Within the tropical climate zone there are distinct varieties based on precipitation:

In the Tropical rainforest climate (Af):[1] all twelve months have an average precipitation of at least 60 mm (2.4 in). These climates usually occur within 5–10° latitude of the equator. In some eastern coast areas, they may extend to as much as over 26° away from the equator. This climate is dominated by the doldrums Low Pressure System all year round, and therefore has no natural seasons.

The Tropical monsoon climate (Am):[1] is a type of climate that is common in South and Southeast Asia and in South and Central America, as well as part of Africa and Australia. It is dominated by the monsoon winds which change direction according to the seasons. This climate has a driest month (which nearly always occurs at or soon after the "winter" solstice for that side of the equator) with rainfall less than 60 millimetres (2.4 in), but more than (100 − [total annual precipitation {mm}/25]).

The Tropical wet and dry or savanna climate (Aw):[1] These climates generally have a pronounced dry season, with the driest month having precipitation less than 60 millimetres (2.4 in) and less than (100 − [total annual precipitation {mm}/25]). 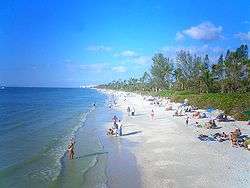 Beach in Naples, Florida lined with coconut trees is an example of a tropical climate. Although it lies in the subtropics over a hundred miles north of the tropic of cancer, the warm waters of the Gulf of Mexico give it a monthly mean temperature never under 18 °C (64 °F), classifying its climate as tropical.

Owing to different causes certain places within the tropics do not have a tropical climate, such as some desert areas and alpine regions.

Because of the effect of sun angle on climate most areas within the tropics are hot year-round, with diurnal variations in temperature exceeding seasonal variations. Seasonal variations in tropical climate are dominated by changes in precipitation, which are in turn largely influenced by the tropical rain belt or Intertropical Convergence Zone (ITCZ), a portion of the Hadley cell. The ITCZ is shown, for July average, in the graphic. Areas of ascending air have heavy rainfall; areas of descending air are dry. The ITCZ somewhat follows the solar equator throughout the year, but with geographical variations, and in some areas (India) is heavily influenced by local large-scale monsoons.