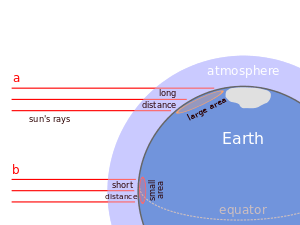 Solar radiation has a lower intensity in polar regions because it travels a longer distance through the atmosphere, and is also spread across a larger surface area due to its oblique angle of approach.[1]

An ice cap climate is a polar climate where the temperature never or almost never exceeds 0 °C (32 °F). The climate covers areas in or near the polar regions, such as Antarctica and Greenland, as well as the highest mountaintops. Such areas are covered by a permanent layer of ice and have no vegetation, but they may have animal life, that usually feeds from the oceans. Ice cap climates are inhospitable to human life. Antarctica, the coldest continent on Earth, sustains no permanent human residents, but have some civil inhabitants in proximity to research stations in coastal settlements that are maritime polar, although there are some towns with permanent human residents in harsher tundra locations that border on an ice cap climate and have a permanent snowpack that never completely recedes in the summer, such as Alert, Nunavut.

Under the Köppen climate classification, the ice cap climate is denoted as EF. Ice caps are defined as a climate with no months above 0 °C (32 °F).[2] Such areas are found around the north and south pole, and on the top of the highest mountains. Since the temperature never exceeds the melting point of ice, any snow or ice that accumulates remains there permanently, over time forming a large ice sheet.

The ice cap climate is distinct from the tundra climate, or ET. A tundra climate has a summer season with temperatures consistently above freezing for several months. This summer is enough to melt the winter ice cover, which prevents the formation of ice sheets. Because of this, tundras have vegetation, while ice caps do not.

Ice cap climate is the world's coldest climate, and includes the coldest places on Earth. Vostok, Antarctica is the coldest place in the world, having recorded a temperature of −89.2 °C (−128.6 °F).[3] The following chart indicates the average and record temperatures in this research station through a year:

The constant freezing temperatures cause the formation of large ice sheets in ice cap climates. These ice sheets, however, are not static, but slowly move off the continents into the surrounding waters. New snow and ice accumulation then replaces the ice that is lost. Precipitation is nearly non-existent in ice cap climates. It is never warm enough for rain, and usually too cold to generate snow. However, wind can blow snow onto the ice sheets from nearby tundras.

The ice sheets are often miles thick. Much of the land located under the ice sheets is actually below sea level, and would be under the ocean if the ice is removed. However, it is the weight of the ice itself that forces this land below sea level. If the ice was removed, the land would rise back up in an effect called post-glacial rebound. This effect is creating new land in formerly ice cap areas such as Sweden.

The extreme pressure exerted by the ice allows for the formation of liquid water at low temperatures that would otherwise result in ice, while the ice sheet itself insulates liquid water from the cold above. The causes the formation of sub-glacial lakes, the largest being Lake Vostok in Antarctica.

Ice cap climates have only existed in ice ages. There have been at least five such ice ages in the Earth's past. Outside these ages, the Earth seems to have been ice-free even in high latitudes.[7][8] By the geologic definition, Earth is currently in an ice age, in that the planet has permanent ice caps. Factors that cause ice ages include changes to the atmosphere, the arrangement of continents, the energy received from the sun, volcanos, and meteor impacts.

The current era is believed to be the only time in the last 600 million years of Earth's history with ice caps at both poles. The Antarctic ice cap was formed after Antarctica split from South America, allowing the formation of the Antarctic Circumpolar Current. The Arctic ice cap was partially caused by the Azolla event, where a large number of ferns in the ocean died, sank, and never decayed, which trapped carbon dioxide beneath the ocean.

There is a hypothesis that around 650 million years ago, the entire planet was frozen, called Snowball Earth. Essentially the entire planet had an ice cap climate. However, this theory is disputed, and even proponents suggest there was an area of periodic melting near the equator.

The two major areas with ice cap climates are Antarctica and Greenland. Some of the most northern islands of Canada and Russia also have ice cap climates. In addition, a large portion of the Arctic Ocean near the North Pole remains frozen year round, effectively making it an icecap climate.

The Arctic Ocean is located in the Arctic region. As a result, the northern polar ice cap is the frozen part of that ocean's surface. The only large landmass in the extreme northern latitudes to have an icecap climate is Greenland, but several smaller islands near the Arctic Ocean also have permanent ice caps. Some places such as Alert, Nunavut despite being characterized as a tundra climate share some characteristics of an ice cap climate, in that although Alert averages above freezing during July and August, during most years the snow does not completely melt except that is in direct sunlight and will often persist from year to year many years in a row without melting completely, but not enough remains to form any kind of glaciation.

Ice cap climates are not nearly as common on land in the extreme northern latitudes as in Antarctica. This is because the Arctic Ocean moderates the temperatures of the surrounding land, making the extreme cold seen in Antarctica impossible. In fact, the coldest winters in the northern hemisphere are in subarctic climates in Siberia, such as Verkhoyansk, which are much farther inland and lack the ocean's moderating effect. This same lack of moderating oceanic effect, coupled with the extreme continentality of the Russian interior allows for very warm summers in the same areas that experience harsh winters. Conversely, ice cap climates in the high arctic remain below 10 degrees Celsius year-round and are the coldest places in the northern hemisphere by mean annual temperature. For example, Resolute and Eureka in Nunavut, Canada have markedly lower annual temperatures than anywhere in Russia or Scandinavia, even for example, Verhoyansk, Omyakon or Novaya Zemlya.

The continent of Antarctica is centered on the South Pole. Antarctica is surrounded on all sides by the Southern Ocean. As a result, high-speed winds circle around Antarctica, preventing warmer air from temperate zones from reaching the continent.

While Antarctica does have some small areas of tundra on the northern fringes, the vast majority of the continent is extremely cold and permanently frozen. Because it is climatically isolated from the rest of the Earth, the continent has extreme cold not seen anywhere else, and weather systems rarely penetrate into the continent.

Mountain glaciers are widespread, especially in the Andes, the Himalayas, the Rocky Mountains, the Caucasus, and the Alps.

Mars, like Earth, has ice caps at its poles. In addition to frozen water, Mars ice caps also have frozen carbon dioxide, commonly known as dry ice. In addition, Mars has seasons similar to Earth. The North Pole of Mars has a permanent water ice cap and a winter-only dry ice cap. On the south pole, both the water and carbon dioxide are permanently frozen.[9]

Europa, a moon of Jupiter, is covered with a permanent sheet of water ice, similar to Antarctica. Scientists theorize that it may have sub-glacial lakes similar to those seen in Antarctica.[10] 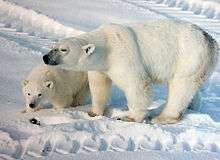 There is very little surface life in ice cap climates. Vegetation cannot grow on ice, and is non-existent. However, the fringes of ice caps do have significant animal life. Most of this life feeds on life in the surrounding oceans. Well known examples are polar bears in the northern region and penguins in Antarctica.

Antarctica has several subglacial lakes underneath its ice sheet. Scientists have theorized that there may be life forms living in these lakes. In the summer of 2011-2012, Russian scientists drilled an ice core into Lake Vostok in Antarctica, but the core has not yet been analyzed. Scientists are particularly worried about accidentally contaminating the subglacial lakes with life forms from outside.