UW–Milwaukee Panther Arena (originally Milwaukee Arena and formerly MECCA Arena, Wisconsin Center Arena and U.S. Cellular Arena) is an indoor arena located in Milwaukee, Wisconsin. The arena, which seats as many as 12,700 people and offers 41,000 feet of floor space, is part of a larger downtown campus, that includes the Milwaukee Theatre and Wisconsin Center.

The arena was part of the MECCA Complex from 1974 until the 1995 opening of the Midwest Express Center.

It opened in 1950 and was one of the first to accommodate the needs of broadcast television. It was folded into MECCA (The Milwaukee Exposition, Convention Center and Arena) when the complex opened in 1974. It is also known for its former unique basketball court painted by Robert Indiana in 1978, with large rainbow 'M's taking up both half-courts representing Milwaukee.

Since the 1960s, the Arena has held a number of concerts by high-profile performers. On September 4, 1964, The Beatles played their only Milwaukee concert, at the Arena, to a sold-out crowd of screaming fans. Folk-rock icon Bob Dylan played a two-night stand there in mid-October as part of his Fall 1981 tour.

It was home to the Milwaukee Hawks (1951–55) and the Milwaukee Bucks of the NBA (1968 to 1988), and hosted the 1977 NBA All-Star Game before an audience of 10,938. The venue was also home to Marquette University's men's basketball team along with the International Hockey League Milwaukee Admirals. These teams all moved to the BMO Harris Bradley Center upon the newer arena's opening in 1988.

In 1994, the Wisconsin Center District (WCD), a state organization, was created in order to fund the Midwest Express Center, and, in 1995 the MECCA complex was folded into this, including the Arena (the BMO Harris Bradley Center is owned by a separate authority). Following a major overhaul in 1998, the arena is now home to the Milwaukee Wave of the Major Indoor Soccer League (including the 2006 MISL All-Star game) and is the Milwaukee venue for Disney on Ice. It has also hosted professional wrestling events, including WCW SuperBrawl II in 1992, WWF King of the Ring 1996, WCW Clash of the Champions in 1997, WWF Over the Edge in 1998 and WCW Mayhem in 2000. It was at the forementioned King Of The Ring card where "Stone Cold" Steve Austin first uttered his now-famous "Austin 3:16" catchphrase.

The WCD added the Wisconsin Athletic Walk of Fame alongside the U.S. Cellular Arena in 2001. At the end of this public promenade is a Wisconsin Historical Marker noting the location where Christopher Sholes invented the first practical typewriter, featuring the QWERTY keyboard layout.

As the MECCA, the building hosted the 1984 NCAA Mideast first and second round games. The U.S. Cellular Arena also hosted all or part of every Horizon League men's basketball conference tournament from 2003 to 2011.

In 2008 and 2009, it was home to the Milwaukee Bonecrushers of the Continental Indoor Football League.[5]

On August 7, 2010, the arena hosted an Arena Football League playoff game between the Milwaukee Mustangs and the Chicago Rush. The Iron played its 2010 regular season home games at the BMO Harris Bradley Center, but the ongoing installation of the new center court scoreboard in that venue forced the home playoff games to be played at the U.S. Cellular Arena, where the Milwaukee Mustangs would go on to win.

It is also home to the Brewcity Bruisers roller derby league.

The arena has been the home of the Milwaukee Panthers men's basketball team at three different times—first from 1993 to 1998, then from 2003 to 2012, and since 2013. The Panthers played their 2012–2013 home games at the 3,500-seat Klotsche Center on UWM's east side campus. The move generated complaints from some Panthers fans and attendance lagged as the team limped to its worst record since the 1990s. After Amanda Braun was named UWM's athletic director in March 2013, she said she would re-examine the decision to move games from the U.S. Cellular Arena. In July 2013, UWM officials reached a 5-year contract with the arena owner, Wisconsin Center District, that runs through the 2017–2018 season.[6]

U.S. Cellular's naming rights expired on May 31, 2014, and they did not renew their contract.[7] On June 26, 2014, it was announced that the Arena would be renamed the UW–Milwaukee Panther Arena, as part of an agreement which would run at least through 2024, with UWM having an option to extend it through 2029.[8] The deal additionally makes the arena officially the major site for UWM events such as graduation ceremonies, a role it had already taken for years before. 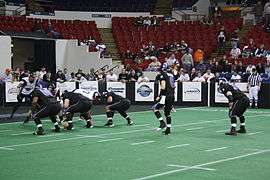 In August 2015, it was revealed that the Milwaukee Admirals were possibly considering moving back to UWM Panther Arena in the next few seasons. Their current home, BMO Harris Bradley Center, is set to be replaced by the new Wisconsin Entertainment and Sports Center, and the Admirals have not expressed any interest of moving into the arena, and in fact, have said they are actually against moving into it. Logically, the move could make sense for a few reasons: more open scheduling dates, the chance to actually share in arena operations rather than just being a tenant, and more marketing in the arena, which they are hardly able to do in Bradley Center. Moreover, Panther Arena's operators have said they would welcome the Admirals moving into the arena.

On March 16, 2016, it was announced the Admirals signed a 10-year lease with a 5-year mutual extension. Also included on the deal was $2.3 million for upgrades to the arena.

The seating capacity for basketball has changed as follows: