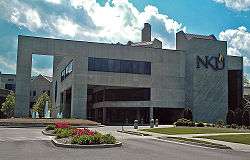 NKU's Library, as seen from the incoming main drive. This is actually the rear entrance and view. The front faces the campus plaza and features a sloping glass facade.

Notable among the university's programs are the Salmon P. Chase College of Law and the College of Informatics, founded in 2006.[7] The university has been cited for academic quality and value by such publications as CIO Magazine,[8] U.S. News and World Report,[9] and Forbes.[10][11] The university issues an annual report that recaps significant achievements by students, faculty, and staff.[12] 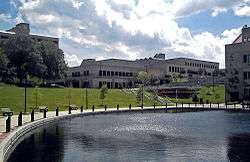 Northern Kentucky University began in 1948, when an extension campus for the University of Kentucky was opened in Covington, Kentucky, known as the UK Northern Extension Center.[13] After 20 years in operation as an extension center for UK, it became an autonomous four-year college under the name Northern Kentucky State College (NKSC).[1] In 1970, Dr. W. Frank Steely was hired as the first president.[14] The following year, the Salmon P. Chase College of Law, formerly an independent law school in Cincinnati, merged with Northern Kentucky State College. The main campus moved from Covington to Highland Heights, Kentucky, in 1972. NKSC awarded its first bachelor's degrees in May 1973. Rapid expansion resulted in the school being upgraded to university status in 1976.[15] 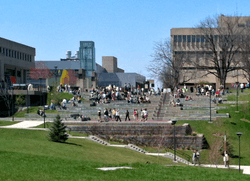 The Northern Kentucky campus plaza in 2010

Northern Kentucky University's main campus in Highland Heights, Kentucky is situated on 400 acres (1.6 km2) of rolling countryside along U.S. Route 27, just off of Interstate 275 and Interstate 471, seven miles (11 km) southeast of Cincinnati, Ohio. The campus was built beginning in the early 1970s, and the first building, Nunn Hall, opened in 1972.[15] Although most of the university's students commute daily to the campus, approximately 2,000 students live on campus. In recent years, the university has been in the process of expanding its campus and facilities. The $60 million BB&T Arena is a recently completed 9,400-seat arena. It serves as the primary venue for athletics on campus, and also as a venue for entertainment, such as live bands and concerts. The arena was originally known as The Bank of Kentucky Center, named after The Bank of Kentucky, which made an endowment of $5 million toward construction. The name was changed in 2015 when that bank was purchased by BB&T. Additionally, a new $37 million, 144,000-square-foot (13,400 m2) Student Union building, which opened to students in August 2008, largely replaces an old university center and is designed to accommodate student needs on campus. The building includes cafeterias, stores, a game room, offices for student life programs, and other amenities for students. Other recent projects included the construction of a new parking garage to accommodate the arena and a European-style roundabout for traffic control and flow management. The most recent university master plan envisions a massive expansion of the campus by the year 2020, including multiple new academic buildings, housing developments, campus quad areas, athletic fields, parking lots and connector roads.[18] The Landrum Academic Center houses an Anthropology Museum. The university campus is also the first educational institute in the world to have a laser-projection planetarium, as part of the Dorothy Westerman Hermann Natural Science Center. The Covington campus, located in Covington, Kentucky, closed at the end of 2008. It mainly served nontraditional and adult students and also hosted the Program for Adult-Centered Education and Emergency Medical Technology programs.[19] Northern Kentucky University's Grant County Center, located in Williamstown, Kentucky, is a partnership between the Grant County Foundation for Higher Education and Northern Kentucky University. It houses Northern Kentucky educational programs and the Williamstown Innovation Center.

The Japanese Language School of Greater Cincinnati (シンシナティ日本語補習校 Shinshinati Nihongo Hoshūkō) is a weekend supplementary Japanese school held at the Mathematics, Education and Psychology Center (MP), formerly known as the Business Education Psychology (BEP) Building.[20][21] The school was founded in 1975.[21] 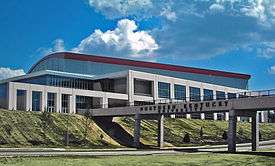 Northern Kentucky's main library is the W. Frank Steely Library,[22] completed in 1975 and named after the first president of the university. A $9.1 million renovation and expansion project was completed in 1995. The library's five floors contain over 850,000 volumes, more than 18,000 bound periodicals, and approximately 1.4 million microforms. The two-floor Chase Law Library[23] Northern Kentucky's other library on campus, contains more than 313,000 volumes and 57,000 monographic and serial titles. 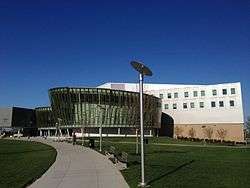 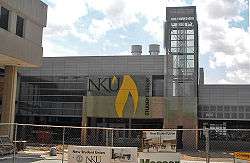 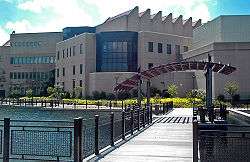 NorseMediaTV is the PEG access Public-access television cable TV station run by Northern Kentucky University.[66] It airs on channel 818 on Cincinnati Bell Fioptics cable and 18 digital/96 analog on Insight Cable of Northern Kentucky. NorseMediaTV students and faculty produce many original programs, such as "Norse Access" - a weekly talk show, various sporting events and entertainment programming. Many NorseMedia programs have won awards at the local (Blue Chips),[67] regional (Philos) and national (Telly) levels, usually in the professional categories. NorseMediaTV also produces live telecasts of NKU basketball, soccer, volleyball and softball games. Students in the program at NKU are invited to create and assist in producing the Electronic Media & Broadcasting programs for the station.[68]

Northern Kentucky University has over 60,000 living alumni, approximately 41,000 of them in Ohio and Kentucky. Many have gone on to achieve success in a variety of fields, including athletics, journalism, business, and government.