UW–Green Bay, founded in 1965, originally had an environmental sustainability emphasis, and now offers a wide array of degrees, many of which are organized as problem-focused interdisciplinary units.[2] The university, unofficially, has the nickname "Eco U".[3] The university's mascot is the Phoenix.

By 1958, the University of Wisconsin-Extension's Green Bay center had swollen to 500 students, and was the second-largest of UW-Extension's eight freshman-sophomore centers. It grew to become the largest by 1965. Demand soon grew for a full-fledged four-year campus serving northeastern Wisconsin. Rudy Small, a vice president of the Paper Converting Machine Company, and Jake Rose, president of Kellogg Bank, took the lead in pushing for a new university in the region. In 1963, the Coordinating Committee for Higher Education unanimously recommended building a new university in the Fox Valley. However, Governor Warren Knowles was somewhat cool to the idea. Eventually, he compromised by proposing that the freshman-sophomore campuses in Green Bay and Kenosha be expanded to four-year institutions (the Kenosha institution eventually became the University of Wisconsin-Parkside). The bill was signed into law on September 2, 1965.[4]

UWGB also has a system of subterranean tunnels running throughout the campus designed to shield students from the elements and provide fast transportation between buildings. Campus planners also had an socioacademic reason for directly connecting the buildings: By traveling throughout the extensive tunnel system, patrons would come into contact with students and faculty they would otherwise not encounter, encouraging interdiciplinism.[6] 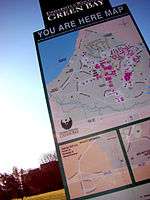 Located on the northeast side of Green Bay, UW–Green Bay enjoys a park-like setting overlooking Lake Michigan's bay of Green Bay. At roughly one square mile, the campus is among the largest in the state. Much of the acreage is devoted to natural areas, with the central campus bordered on one side by the bay and on the other by a wooded ridge known as the Niagara Escarpment.[9]

Weidner Center for the Performing Arts

The Weidner Center for the Performing Arts features the 2,000-seat Cofrin Family Hall, the 200-seat Fort Howard Hall for recitals, the 99-seat-in-the-round Jean Weidner Theatre, and a dance studio. A Casavant pipe organ and a Dale Chihuly chandelier are among its amenities.

A nine-hole public golf course is located on campus. The course also has a clubhouse that serves food and drinks. Current record holder and clubhouse manager Bill Lindmark shot a best of 29 in 1999.[10] 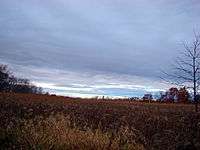 The Cofrin Memorial Arboretum forms a natural boundary of 290 acres encircling the UW Green Bay campus and providing ready access for recreation, field trips, and research projects. The purpose of the Arboretum is to restore and preserve some of Wisconsin's native ecological communities and to provide a place where people can enjoy and appreciate nature. More than 6 miles of trails are open to the public for passive recreation such as hiking, biking, bird-watching, cross-country skiing, and simply meandering.[11]

At the center of learning and the academic buildings is the Cofrin Library, supporting the academic programs with a collection of more than one million items. As a depository for the U.S. government and the state of Wisconsin, the library has extensive holdings and electronic access to government documents. The Special Collections Department contains historical records of Northeast Wisconsin, genealogical records, and a local business archives collection. 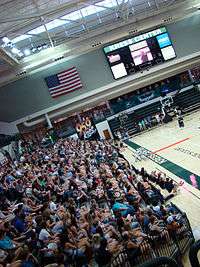 The Lawton Gallery, located adjacent to the theater in Theater Hall, is free and open to the public. The gallery mounts six to eight exhibits each year, including shows by UW–Green Bay faculty and students. The gallery has a role in the Art academic program, both through its exhibits and through classes that offer gallery management experience to students. The gallery is currently managed by Professor Stephen Perkins.

Joseph LeMieux was a stonemason who built lighthouses on the Great Lakes. His brother-in-law, Fabian LaPlant, was a carpenter. Together they teamed to build what today is a hidden Green Bay haven, LeMieux Chapel.[12]

The UWGB campus is fitted with a system of underground tunnels which connect most of its buildings together from the Cofrin Library. It serves to shield students from weather conditions including snow, rain, and heat. Although the concourses do not extend to the residence halls, Weidner Center, or Kress Events Center, entrances are within walking distance of each.[14]

UW–Green Bay, which brands itself athletically as "Green Bay", is an NCAA Division I school, and is a member of the Horizon League.

The Green Bay women's basketball team has won or tied for the Horizon League regular-season championship nine times, including the last eight years.[15] They have been to the NCAA tournament eight times, including four of the last five years. They have also made two appearances in the Women's National Invitation Tournament (WNIT).

The team received its first national ranking in 2003, when it was ranked as high as #16 in both the Associated Press poll and the Coaches' Poll. In 2005, they also received a national ranking and a bid to the NCAA Tournament, but were knocked out in the first round by Maryland. In 2006, they appeared in the WNIT, where they lost to Iowa State in a first-round game. The next season, they were seeded #9 in the NCAA Tournament and defeated New Mexico in the first round before falling to top-seeded Connecticut in the second round. That loss ended their school record and nation-leading 26-game winning streak.

The next NCAA Tournament win for the Phoenix women came in 2010, when they entered as a #12 seed and upset 5-seed Virginia in the first round before bowing out to Iowa State on the Cyclones' home court just short of the Sweet 16. In the 2011 tournament, they entered as a #5 seed and made their first Sweet Sixteen appearance, defeating Arkansas–Little Rock and Michigan State before losing to regional top seed Baylor.

The Green Bay softball team claimed its first Horizon League tournament championship in 2005 after being picked to finish last in the conference. They went on to the national tournament, where they defeated #5 seed Oregon State in the first round.