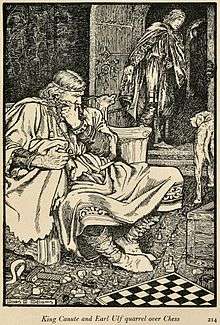 Ulf (or Ulf Jarl) (Ulf Thorgilsson) was a Danish earl (jarl) and regent of Denmark. Ulf was the father of King Sweyn II of Denmark and thus the progenitor of the House of Estridsen, which would rule Denmark from 1047 to 1375, which was also sometimes, specially in Swedish sources, referred to as the Ulfinger dynasty to honor him. [1]

Ulf Jarl was the son of Thorgils Sprakalägg. His brother was Eilaf, an earl of King Cnut the Great, and his sister was Gytha Thorkelsdóttir who married Godwin, Earl of Wessex. He participated in Cnut the Great's conquest of England as one of his most trusted men. In 1015-16, he married Cnut's sister, Estrid Svendsdatter of Denmark, by whom he had sons, Svein, who later became the king of Denmark,[2] Beorn (Bjørn), who would become an Earl in England. Chronicler Adam of Bremen also gives Ulf a son, Åsbjørn, but does not name explicitly name him as son of Estrith, as he does with Svein and Beorn. There may have also been a daughter - Harald Hardrådes saga, part of Heimskringla gives an account of Åsmund, son of Svein's sister, yet he is likely the same Åsmund named as son of Beorn in Morkinskinna.[3] From c. 1024 he was appointed the Jarl of Denmark and King Cnut's appointee as regent of Denmark, which he ruled when the king was absent. He was also the foster-father and guardian of King Cnut's son Harthacnut.

In 1026, the Swedish king Anund Jakob and the Norwegian king Olaf II took advantage of King Cnut's absence and launched an attack on the Danish in the Baltic Sea. Ulf convinced the freemen to elect Harthacnut king, since they were discontented at Cnut's absenteeism. This was a ruse on Ulf's part since his role as Harthacnut's guardian would make him the ruler of Denmark.[4]

When Cnut learnt what had happened, he returned to Denmark and fought the Swedes and the Norwegians at the Battle of the Helgeå. The Anglo-Saxon Chronicle, which instead places the battle a year earlier in 1025, names the leaders of the Swedes as Ulf and Eglaf, usually identified with Ulf Jarl and his brother Eilaf. Saxo likewise would have Ulf fighting Cnut at Helgeå, but St. Olaf's Saga gives an account in which while Cnut lost the land battle, he was was the overall victor when Ulf helped him win the accompanying sea battle. One possible explanation for this conflict of sources is that Ulf fought with the Swedes against Cnut in a 1025 battle not recounted by the saga because Olaf did not take part, but Ulf switched sides before Helgeå, the Anglo-Saxon Chronicle confusing the two.[5] If Eilaf fought against Cnut, he was forgiven as he was retained as Earl in England until Cnut's death, and then fled, suggesting he was closely linked to the king.[6] Any rapprochement with Ulf was short-lived.[7] At a banquet in Roskilde, the two brothers-in-law were playing chess and started arguing with each other. The next day, the Christmas of 1026, Cnut had one of his housecarls kill Earl Ulf in Trinity Church, the predecessor of Roskilde Cathedral.