An earl /ɜːrl/[1] is a member of the nobility. The title is Anglo-Saxon in origin, akin to the Scandinavian form jarl, and meant "chieftain", particularly a chieftain set to rule a territory in a king's stead. In Scandinavia, it became obsolete in the Middle Ages and was replaced by duke (hertig/hertug/hertog). In later medieval Britain, it became the equivalent of the continental count (in England in the earlier period, it was more akin to a duke; in Scotland it assimilated the concept of mormaer). However, earlier in Scandinavia, jarl could also mean a sovereign prince. For example, the rulers of several of the petty kingdoms of Norway had the title of jarl and in many cases they had no less power than their neighbours who had the title of king. Alternative names for the "Earl/Count" rank in the nobility structure are used in other countries, such as Hakushaku during the Japanese Imperial era.

In modern Britain, an earl is a member of the peerage, ranking below a marquess and above a viscount.[2] A feminine form of earl never developed; instead, countess is used.

See also: Ríg (Norse god) for the account in Norse mythology of the warrior Jarl or Ríg-Jarl presented as the ancestor of the class of warrior-nobles.

The term earl has been compared to the name of the Heruli, and to runic erilaz.[3] Proto-Norse eril, or the later Old Norse jarl, came to signify the rank of a leader.[4]

The Norman-derived equivalent count (from Latin comes) was not introduced following the Norman conquest of England though countess was and is used for the female title. Geoffrey Hughes writes, "It is a likely speculation that the Norman French title 'Count' was abandoned in England in favour of the Germanic 'Earl' […] precisely because of the uncomfortable phonetic proximity to cunt".[5]

Earls in the United Kingdom and the Commonwealth 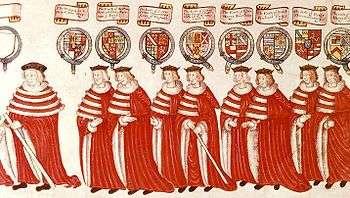 The royal procession to Parliament at Westminster, 4 February 1512. Left to right: The Marquess of Dorset, Earl of Northumberland, Earl of Surrey, Earl of Shrewsbury, Earl of Essex, Earl of Kent, Earl of Derby, Earl of Wiltshire. From: Parliament Procession Roll of 1512.

An earl has the title Earl of [X] when the title originates from a placename, or Earl [X] when the title comes from a surname. In either case, he is referred to as Lord [X], and his wife as Lady [X]. A countess who holds an earldom in her own right also uses Lady [X], but her husband does not have a title (unless he has one in his own right).

The eldest son of an earl, though not himself a peer, is entitled to use a courtesy title, usually the highest of his father's lesser titles (if any); younger sons are styled The Honourable [Forename] [Surname], and daughters, The Lady [Forename] [Surname] (Lady Diana Spencer being a well-known example).

In the peerage of Scotland, when there are no courtesy titles involved, the heir to an earldom, and indeed any level of peerage, is styled Master of [X], and successive sons as younger of [X].

In Anglo-Saxon England, earls had authority over their own regions and right of judgment in provincial courts, as delegated by the king. They collected fines and taxes and in return received a "third penny", one-third of the money they collected. In wartime they led the king's armies. Some shires were grouped together into larger units known as earldoms, headed by an ealdorman or earl. Under Edward the Confessor earldoms like Wessex, Mercia, East Anglia and Northumbria—names that represented earlier independent kingdoms—were much larger than any shire.

Earls originally functioned essentially as royal governors. Though the title of Earl was nominally equal to the continental duke, unlike them, earls were not de facto rulers in their own right.

After the Norman Conquest, William the Conqueror tried to rule England using the traditional system but eventually modified it to his own liking. Shires became the largest secular subdivision in England and earldoms disappeared. The Normans did create new earls like those of Herefordshire, Shropshire, and Cheshire but they were associated with only a single shire at most. Their power and regional jurisdiction was limited to that of the Norman counts.[6] There was no longer any administrative layer larger than the shire, and shires became "counties". Earls no longer aided in tax collection or made decisions in country courts and their numbers were small.

King Stephen increased the number of earls to reward those loyal to him in his war with his cousin Empress Matilda. He gave some earls the right to hold royal castles or control the sheriff and soon other earls assumed these rights themselves. By the end of his reign, some earls held courts of their own and even minted their own coins, against the wishes of the king.

It fell to Stephen's successor Henry II to again curtail the power of earls. He took back the control of royal castles and even demolished castles that earls had built for themselves. He did not create new earls or earldoms. No earl was allowed to remain independent of royal control.

The English kings had found it dangerous to give additional power to an already powerful aristocracy, so gradually sheriffs assumed the governing role. The details of this transition remain obscure, since earls in more peripheral areas, such as the Scottish Marches and Welsh Marches and Cornwall, retained some viceregal powers long after other earls had lost them. The loosening of central authority during the Anarchy also complicates any smooth description of the changeover.

By the 13th century, earls had a social rank just below the king and princes, but were not necessarily more powerful or wealthier than other noblemen. The only way to become an earl was to inherit the title or marry into one—and the king reserved a right to prevent the transfer of the title. By the 14th century, creating an earl included a special public ceremony where the king personally tied a sword belt around the waist of the new earl, emphasizing the fact that the earl's rights came from him.

Earls still held influence and, as "companions of the king", were regarded as supporters of the king's power. They showed that power for the first time in 1327 when they deposed Edward II. They would later do the same with other kings of whom they disapproved. Still, the number of earls remained the same until 1337 when Edward III declared that he intended to create six new earldoms.

A loose connection between earls and shires remained for a long time after authority had moved over to the sheriffs. An official defining characteristic of an earl still consisted of the receipt of the "third penny", one-third of the revenues of justice of a shire, that later became a fixed sum. Thus every earl had an association with some shire, and very often a new creation of an earldom would take place in favour of the county where the new earl already had large estates and local influence.

Also, due to the association of earls and shires, the medieval practice could remain somewhat loose regarding the precise name used: no confusion could arise by calling someone earl of a shire, earl of the county town of the shire, or earl of some other prominent place in the shire; these all implied the same. So there were the "earl of Shrewsbury" (Shropshire), "earl of Arundel", "earl of Chichester" (Sussex), "earl of Winchester" (Hampshire), etc.

In a few cases the earl was traditionally addressed by his family name, e.g. the "earl Warenne" (in this case the practice may have arisen because these earls had little or no property in Surrey, their official county). Thus an earl did not always have an intimate association with "his" county. Another example comes from the earls of Oxford, whose property largely lay in Essex. They became earls of Oxford because earls of Essex and of the other nearby shires already existed.

Eventually the connection between an earl and a shire disappeared, so that in the present day a number of earldoms take their names from towns, mountains, or simply surnames. Nevertheless, some consider that the earldoms named after counties (or county towns) retain more prestige.

The oldest earldoms in Scotland (with the exception of the Earldom of Dunbar and March) originated from the office of mormaer, such as the Mormaer of Fife, of Strathearn, etc.; later earldoms developed by analogy.

Some of the most significant Earls (Welsh: ieirll, singular iarll) in Welsh history were those from the West of England. As Wales remained independent of any Norman jurisdiction, the more powerful Earls in England were encouraged to invade and establish effective "buffer states" to be run as autonomous lordships. These Marcher Lords included the earls of Chester, Gloucester, Hereford, Pembroke and Shrewsbury (see also English Earls of March).

The first Earldoms created within Wales were the Lordship of Glamorgan (a comital title) and the Earldom of Pembroke.

Tir Iarll (English: Earl's land) is an area of Glamorgan, which has traditionally had a particular resonance in Welsh culture.[7] 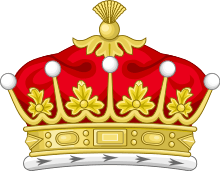 A coronet of a British earl.

A British earl is entitled to a coronet bearing eight strawberry leaves (four visible) and eight silver balls (or pearls) around the rim (five visible). The actual coronet is mostly worn on certain ceremonial occasions, but an Earl may bear his coronet of rank on his coat of arms above the shield.

In later medieval Norway, the title of jarl was the highest rank below the king. The jarl was the only one, beside the king himself, who was entitled to have a hird (large armed retinue). There was usually no more than one jarl in mainland Norway at any one time, sometimes none. The ruler of the Norwegian dependency of Orkney held the title of jarl, and after Iceland had acknowledged Norwegian overlordship in 1261, a jarl was sent there as well as the king's high representative. In mainland Norway, the title of jarl was usually used for one of two purposes:

In 1237, jarl Skule Bårdsson was given the rank of duke (hertug). This was the first time this title had been used in Norway, and meant that the title jarl was no longer the highest rank below the king. It also heralded the introduction of new noble titles from continental Europe, which were to replace the old Norse titles. The last jarl in mainland Norway was appointed in 1295.

The usage of the title in Sweden was similar to Norway's. Known as jarls from the 12th and 13th century were Birger Brosa, Jon Jarl, Folke Birgersson, Charles the Deaf, Ulf Fase, and the most powerful of all jarls and the last to hold the title, Birger Jarl.

Only one person ever held the title of Earl (or Jarl) in Iceland. This was Gissur Þorvaldsson, who was made Earl of Iceland by King Haakon IV of Norway for his efforts in bringing Iceland under Norwegian kingship during the Age of the Sturlungs.[8]